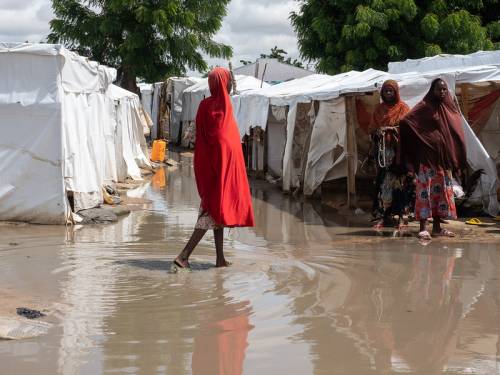 The Norwegian Refugee Council (NRC) said it was worried about the situation and thus appealed for “urgent financial assistance” to address the colossal humanitarian needs and to prevent the spread of deadly cholera.

“Displaced people are suffering due to relentless rains and wind battering their homes the last few days. Large numbers of families, who fled from conflict months ago, are left homeless while others are forced to share overcrowded tents with neighbours or relatives,” said Eric Batonon, Country Director for NRC in Nigeria.

According to NRC’s assessments, over 6,800 people living in displacement camps in Maiduguri have been impacted by floods in recent weeks. In Dikwa, 500 people have been rendered homeless due to flooding and have set up home in disused registration centres.

“They are essentially displaced within a displacement camp,” Batonon added.

“My home is completely destroyed. My floor has turned to mud and water is everywhere. The rain keeps coming and we do not have any choice but to wait for it to stop or share with others,” said displaced mother-of-four Fatima Mohammed (30).

The Adamawa State government, the organization said, had officially declared an outbreak of cholera in three local government areas during the rainy season.

The total number of cases reported as of August 16 stands at 633.

Four people have so far lost their lives to the disease. Due to recent heavy rain and flooding, more cases could be confirmed over the coming weeks, the NRC pointed out.

“Displaced people are living in sub-human conditions across the region. There are no sanitation or drainage facilities in most camps. People are going to the toilet in open spaces because there are no facilities for them to use and now that the camps are filled with stagnant floodwater, water-borne diseases like cholera quickly spread,” Batonon added.

Meanwhile, the United Nations and partners have appealed for $848 million to address the needs in northeast Nigeria this year. About eight months into the year, less than 40 per cent has been received.

On Tuesday night (August 20) in Dikwa, a female suicide bomber detonated a bomb, killing herself and injuring four civilians.

This was the first attack of its kind in the area since December 2018.