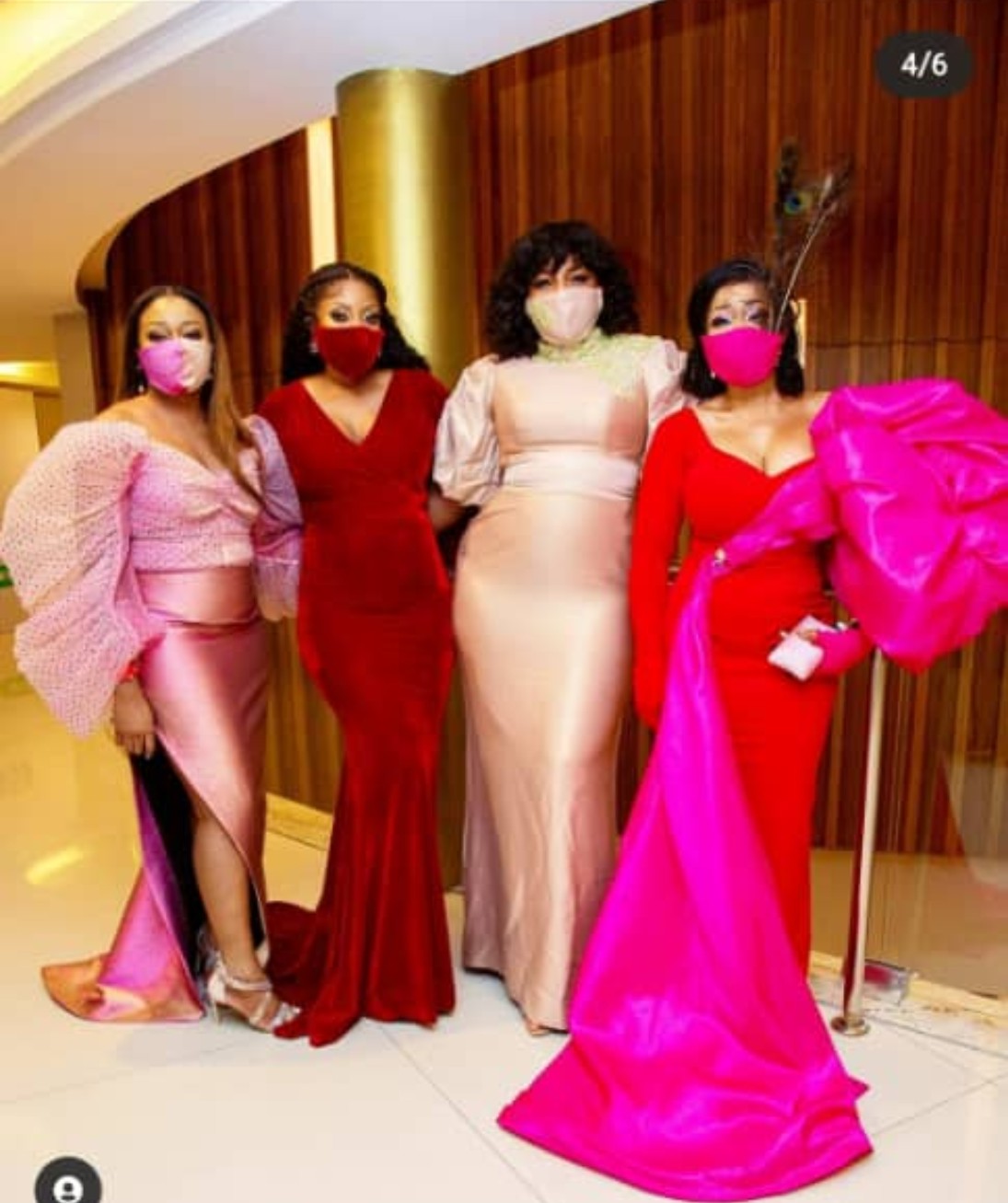 Highly respected movie producer and star actress, Rita Dominic are known in the industry to work on different movie projects together and it has always turned out a huge success.

This past weekend 14th March 2021 the highly anticipated movie “La Femme Anjola” which featurd Rita Dominic as the lead actress was premiered in Lagos and it was star studded. The A-list stars were all looking gorgeous in their different outfits.

The movie “La Femme Anjola” is a crime thriller film set in Lagos and Cape Town about a male stockbroker whose life is turned upside down when he falls for a beautiful woman married to a wealthy gangster.

The movie was written by Tunde Babalola and directed by Mildred Okwo. It features stars like Rita Dominic, Femi Jacobs amongst other notable stars.

It will also be available in cinemas near you from 19th of March 2021.

City People Senior Showbiz Reporter, BIODUN ALAO brings you style statement of A-list stars who made it to the movie premiere that took place at Ebony Life Place, Lagos.

Rita Dominics is no doubt one of the most stylish movie stars in the entertainment industry. She has bagged award severally home and abroad due to her fashion sense. When it comes to fashion, she can never get it wrong.

She slayed in a red gorgeous gown with silver accessories to compliment her look. She was styled by Yolanda Okereke Mercy Eke, the First Female Winner of BB Naija Reality Television Show left no stone unturned in an all while dress designed by CEO Luminee and styled by the force Swanky Jerry.

Toke Makinwa the style icon slayed in an KY blue all masked up two pieces. She sure look like a pack of chocolate. Toke never disappoint when it comes to making fashion statement and she sure nailed this as well.

Pretty actress, Mimi Onalaja also looked gorgeous in an orange outfit by Tubo. She is also one of the most stylish actresses in the entertainment industry.

Media personality Latasha Ngwube popularly known as Latasha Lagos look pretty as ever in a black outfit by Weizdhurm Franklyn, and she sure look very gorgeous.

Reality star, Cynthia Nwadiora is another beautiful fashion icon many admire. Her carriage and charisma is second to none. She look pretty and sexy in a purple outfit by Ericamoore Brand.

Reality stars came out in good number to support Rita Dominic. Dorathy Bachir also slayed in a green beautiful outfit designed by Weizdhurm Franklyn and she was styled by the brilliant and exceptional Medlin boss.

Rebecca Nengi Hampson too was not left out. She was looking pretty as ever in a blue long dress by Ladybeellionaire and styled by Yolande Okereke.

Movie icon, Shaffy Bello nailed it in her beautifully designed outfit by Ladybellionaire luxury. She look agelss and very classy in her red and pinks outfit.

With a banging body like that of super star actress, Kate Henshaw. She sure look sweet 16 in her futuristic outfit and mask by Irawo Studio. Her pretty hairdo by her one and only Yellosisi.

Shan George is one of those few actresses that has been in the industry for over three decades and still relevant in the industry. Her long dress was equally beautiful.

Kiki Omeli, pretty Kiki’s purple and gold dress was breathtaking with a gold shoe to compliment her looks. Her dress was designed by Ujuestelo.

Chika Ike is one style icon that has been able to create a niche for herself in the industry. She always take her time to step out in grandstyle. Her liliac suit designed by Rhodaebun was actually breathtaking. You can help but admire her.

Highly respected celebrity designer, Lanre Silva Ajayi look as beautiful as a flower in her peach dress. All for Rita Dominic.

Victory Wilson who happens to be the red carpet host didn’t leave any stone unturned either. Her short dress by Jessiicarindz Clothing was totally on point.

Jumoke Aderonmu look simple and beautiful in a gold long dress with a gold shoe and purse to compliment her looks.

Ebuka led other guys to the movie premiere of “La Femme Anjola”. All masked up. He was looking handsome as ever in a brown outfit designed by Tinathan.

Enyinna Nwigwe was one of the A-list stars that made it to the premiere looking handsome as ever.

Femi Jacobs an award winning actor featured in the movie “La Femme Anjola”. He was looking good in a suit styled by Yoland Okereke.

Shawn Fagua was spotted in all black outfit and his outfit was designed by Telvin Nwafor.

Temisan Emmanuel stood out in his brown shuit by Rhobes Official. He was looking very handsome.

Nonso Bassey played one of the lead roles in the movie “La Femme Anjola”. He was dressed in a red suit designed by Sumaugust Fit.