Home News Are You Suffering From Bipolar Disorder? •You Just May Not Know [Read This…]
News 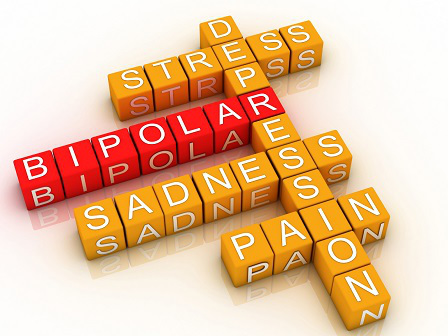 Bipolar Disorder, also identified as Hyper Depression is a disease. It is a medical condition that causes psychological problems to such a degree that the symptoms hamper daily functioning. This disorder is also a major affective disorder in which an individual alternate between states of deep depression and extreme elation. Bipolar disorder is an illness that affects thoughts, feelings, judgment, and behavior and how a person feels physically.This disorder consists of 5 different types.

TYPES OF BIPOLAR DISORDER
First, bipolar one display episodes of both depression and mania, in which the person experiences one or more manic episodes or mixed episodes. A manic episode is a distinct period characterized by an abnormal, persistent elevated, expansive, or irritable mood. Also, inflated self-esteem or grandiosity, decreased the need to sleep, distractibility, increased need to talk or pressure to keep talking. Furthermore, an increased involvement in goal-directed activities with high potential of painful consequences moreover psychomotor agitation that lasts at least one week. A mixed episode is a different period characterized by rapidly alternating moods between sadness, irritability, and euphoria.
According to omnimedicalsearch.com, “Bipolar one disorder is a recurrent disorder, more than 90 percent of those that experience a manic episode will have future similar episodes. The average onset of bipolar one disorder is around the age of 20 for both men and women.”(2007).

The second type is bipolar ll disorder. Patients with this disorder experiences at least one incident of depression and at a minimum of one hypomanic event. A hypomanic episode is similar to a manic episode but much briefer, lasting only a few days, and not as severe. People with hypomania may have an elevated mood, irritability and some changes in their functioning, but they carry on with their regular daily routine and functioning, and they do not require hospitalization. In bipolar ll disorder, the periods of depression are typically much more extended than the periods of hypomania.
In omnimedicalresearch.com, it states that “This type of bipolar disorder seems to be more common among women than men” (2007).

The 4th type of this disorder is cyclothymia which includes mood swings,but the highs and lows are not as frequent as those of full-blown bipolar disorder.InMixednuts.net, People with cyclothymic disorder changebetween hypomania and mild depression. It is not as bad as bipolar I and II butcontinues for more extended periods with no break in symptoms. The cyclothymic disorder can later become afull-blown bipolar disorder in some people or can continue as a low-grade chronic condition (2007).

Even though bipolar l, bipolar ll, rapid cycling,andcyclothymia are all part of bipolar disorder,their symptoms vary. The last part of this disorder is mixed state bipolar. What differentiates this bipolar from others is that both mania and depression occur at the same time.A severe episode of either the mania or depression may result in psychosis or a detachment from reality. Symptoms of psychosis may include hearing or seeing things that are not there (hallucinations) and false but firmly held beliefs (delusions).

In mixednuts.net (2007), it explained that “the excitability and agitation of mania is coupled with depression and irritability. This combination of high energy and agitation along with depression makes the mixed episode the most dangerous for risk of suicide (p. 1)”. All bipolar disorder occurs in both men and women,and no group is more affected by this disease.

CAUSES OF BIPOLAR
Unfortunately, the causes of bipolar disorder are unknown.We should keep in mind that bad parenting does not cause it nor is it a consequence of a personality disorder, moral weakness, or a fault in character. Research shows that many factorscontribute to abipolar disorder such as biochemical,genes, stress and environmental factors.

According to emedicinehealth.com (2008), “the brain’s functions are controlled by chemicals called neurotransmitters. An imbalance in the levels of one of these neurotransmitters, such as norepinephrine, may cause bipolar disorder. When levels of this chemical are too high, mania occurs andwhen levels of norepinephrine drop below normal levels, a person may experience depression (p. 2)”.

Greco et al. (2014),explained thatthe brain is made up of several complex parts, all of which work together to control body functions, produce thought and emotion, and store and retrieve memories. The brain is the most difficult and least understood organ in the body. It is the focal point of thecentral nervous system, which also includes the nerves of the spine.Earlier research has shown a link between the autonomic nervous system abnormality and bipolar (p.1865).

In short, researchers are quite sure that the neurotransmitter system is at least part of the cause of bipolar disorder, but further research is still needed to define its exact role.According to Read (2007), researchers continued to publish new information and theories.One theory ina 2000 study reported those with bipolar disorder, two main areas of the brain have 30 percent more cells that send signals to another brain cell (Read (2007), p.1). This statement hypothesizes that the additional signal-sending cells may lead to a kind of overstimulation, which makes sense considering the systems of bipolar disorder.

A stressful life event is another theory thought to be the primary element in the development of bipolar disorder.These can bea death in the family to the loss of a job, from the birth of a child to a move. It can be pretty much anything, but it cannot be precisely defined.Sincewe all experience stress differently,research has found that stressful life events can lead to the onset of symptoms of bipolar disorder. However, once the disorder is triggered and progresses,Read (2007) states, “it seems to develop a life of its own once the cycle begins, psychological and or biological processes take over and keep the illness active” (p. 2).

Finally, theenvironment is considered another factor that can cause bipolar disorder. Mayoclinic.com (2008),explained that “some studies of identical twins show that one twin has the condition while the other does not which indicate that genes alone may not be responsible for bipolar disorder and that environmental causes may include problems with self-esteem, significant loss or high stress.

HOW TO MANAGE BIPOLAR
Bipolar disorder is a long-term condition that requires lifelong treatment, even during periods when the individual may feel better. To perform bipolar treatment, a qualified psychiatrist or registered social worker with the knowledge and skill in treating the condition can work with the individual suffering from bipolar. Adequate and appropriate treatment is vital for reducing the frequency and severity of manic and depressive episodes and allowing anindividual to live more balanced and enjoyable life. Medications are anessential part of bipolar treatment,and these medications include mood stabilizers, anti-seizure medications, antidepressants,and psychotherapy.

Mood stabilizers according to mayoclinic.com (2008)are mostly the common prescribe medication for bipolar disorder because these medications help regulate and stabilize mood so that patient does not swing between depression and mania.Lithium has been widely used as a mood stabilizer and is the first line of treatment for manic episodes (p.7).
Psychotherapy is another vital part of bipolar treatment which includes cognitive behavioral therapy, family therapy, electroconvulsive therapy,and hospitalization.

In bipolartreatment .com, it states cognitive behavior therapy tries to help people become more aware of their faulty or negative thinking patterns.It teaches them to think about things in new and healthier ways, however, talking is aimed at in behavioral therapy which encouraged patients to do specific activities; it teaches problem-solving strategies, methods for self-control, and social learning activities.In family therapy, the families are encouraged to help identify and reduce stressors within the family which can also help the family improve its communication style and problem- solving skills and resolve conflicts.

Electroconvulsive therapy is mainly for people who have episodes of severe depression with suicidal tendencies or for people who have not seen improvements in their symptoms despite other treatment. According to mayoclinic.com, it explained that electroconvulsive therapy is a procedure in which electrical currents are passed through the brain to cause a seizure. Researchers do not fully understand just how ECT works but believed that the seizure triggers changes in brain chemistry that may lead to corrections in an individual mood.

Overall, bipolar disorder is highly manageable, and with proper treatment, individuals can live a full, productive life. When bipolar is untreated, this problem can impose an enormous emotional and financial burden on the people suffering from bipolar and their families. Improved public awareness, education, and treatment can reduce the burden of bipolar disorder. Access to psychiatrists and other health care practitioners, the latest medications, psychotherapy, and support in both the hospitals and community could help in the successful treatment of those with bipolar disorder.

The Nigerian government and especially the politicians should please reconstruct the psychiatric centers, put more funding toward its rehabilitation, provide current medications and strongly consider less side effect of that medications and then advice the public to come forward and received proper care and support to help manage their condition. It is exceptionally crucial to have a non-judgmental attitude toward those people suffering from mental health problems. It is highly essential not see mental health problem as a big deal in our society,and such demoralize, stigmatize, label, marginalize, and discriminate against those suffering from mental health issues.

People must move away from the belief that mental health problem is a spiritual attack. Mental health is not a spiritual attack; it is a medical condition that affects the brain and as a result, affect our mental and physical well-being. Mental health issues happen all over the world including Canada and the USA and their citizens are being diagnosed and managed with proper medications and resources. Therefore, The Nigerian government should consider moving toward this agenda.
“Do take care of yourself and each other”

This article is only to create awareness and educate the society. It is not intended for anyone to use as a diagnose.

Are You Suffering From Bipolar Disorder? •You Just May Not Know [Read This…] was last modified: February 25th, 2018 by Nimota Raji-Gambari