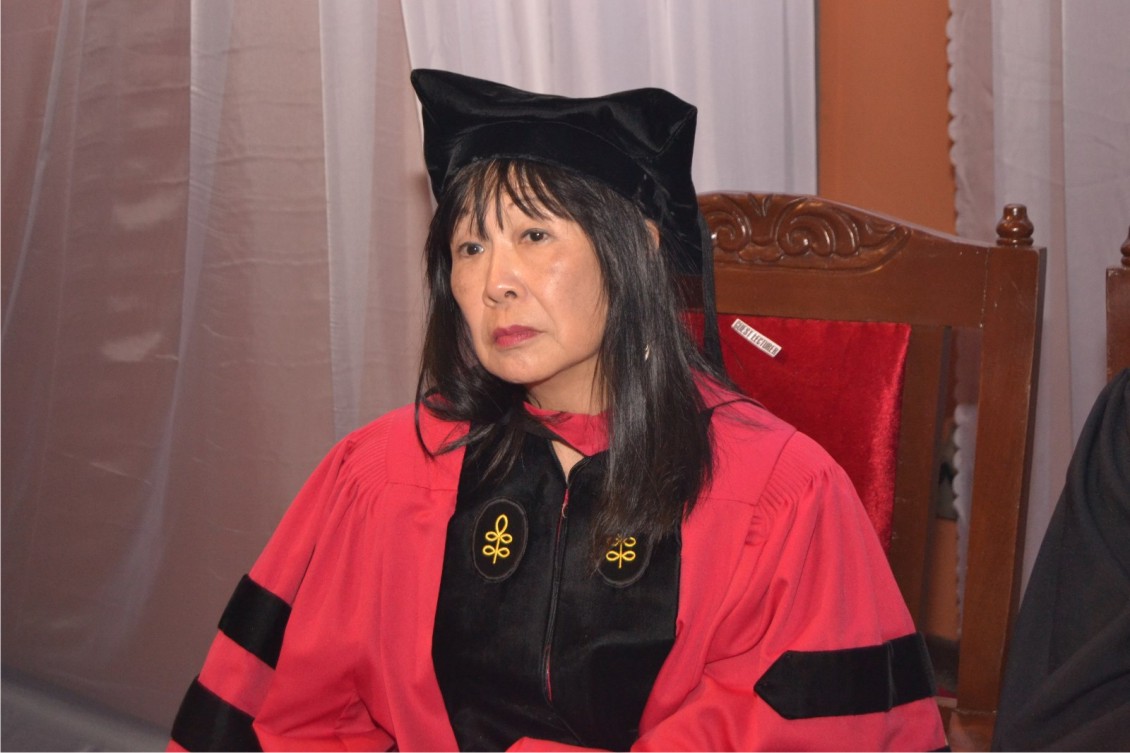 The Pro-Chancellor of the University of Lagos, Dr. Wale Babalakin recently hosted hundreds of students, lecturers, professors, other Pro-Chancellors and important personalities in the University community to its annual lecture titled “Responding to Nigeria’s Diseases outbreaks and Epidemics: Ebola, Zika and HIV”, on 23rd July 23, 2018. The event took place at J.F Ade Ajayi auditorium.

The lecture was delivered by Prof. Phyllis Kanki, Professor of Immunology and Infectious Disease at Harvard T. H. Chan School of Public Health, USA. She is a woman who has over the years devoted her life to the study of the Virology, Pathogenesis and Molecular epidemiology of HIV in Africa and who also in the course of her PHD discovered HIV-2, one of the predominant subtypes of HIV found in Nigeria.

Speaking at the event, Dr. Babalakin, escribed Prof. Kanki as a woman of great repute who God has raised for this generation. He also stated what the University of Lagos will do to help fight the diseases. In his word, “our guest lecturer is a great researcher from Harvard University who has played enormous roles in the discovery of the HIV-2 and the treatment of the scourge in Africa. She’s receiving a lot of cooperation and working with some Nigeria Institutions and she’s working very closely with the University of Lagos. Minister of Health, Prof. Isaac Adewole mentioned that this lecture series is the first by any University in Nigeria. It’s a Pro-Chancellor’s initiative for attracting the most distinguished people all over the world to this venue and he has brought in Prof Kanki who is extremely qualified for this.

Hon. Justice Olayinka Ayoola, former Judge of the Supreme Court, former Chief Justice of the Gambia and former chairman of I.C.P.C was the Chairman of the day. Professor Isaac Adewole– the Honorable Minister of Health was the Special Guest of Honour. Prof. Oluwatoyin T. Ogundipe Vice–Chancellor, University of Lagos was the Host, while the Chief Host was Dr. Bolanle Olawale Babalakin (SAN), the Pro-Chancellor, University of Lagos

Below are excerpts of the lecture.

“I have been working in West Africa since 1980s. In 2000, I created and directed the AIDS Prevention Initiative in Nigeria CAPIN), with a $25 million grant from the Bill & Melinda Gates Foundation. In 2004, I led the Harvard President’s Emergency Plan for AIDS Relief CPEPFAR), providing prevention, care and HIV antiretroviral therapy in Nigeria, Botswana, and Tanzania. The programme in Nigeria was the largest of the 3 countries and through APIN, we provided capacity building for clinical, laboratory and research. When the Harvard programme morphed to APIN LLC, now a Nigerian NGO, the programme has provided treatment for over 160,000 AIDS patients. Our programmes have provided high-quality care for Nigerian patients and have also allowed us conduct operational research to determine the efficacy of our preventive and treatment programmes. The research also allowed us partner with the Universities of Lagos, Jos and Ibadan to develop the NIH- funded Medical Education Partnership Initiative Programmes that developed the research capacity of the junior faculty.

In recent years, I have collaborated with the Universities of Lagos and Jos on research into Viral hemorrhagic fever viruses. Today, I would like to share some of our more recent research findings on Ebola virus (EBOV) and Zika (ZIKV) virus and then conclude with our most recent study of HIV drug resistance in children.

Nigeria has had a long history of infectious disease outbreaks and epidemics. This chart plots some of the major outbreaks beginning with the 1996 Meningitis A outbreak that resulted in 12,000 fatalities. Lassa Fever virus outbreaks have been recorded in certain states in the country on a regular basis with over 1000 suspected cases in 2018. Avian influenza was as well seen in 2006 and then again in 2015. During the 2014 West Africa Ebola virus epidemic, Nigeria suffered 19 cases, but successfully contained its spread.

Our understanding of the Human Immune System is increasing with a complex array of cell types that in principle, are responsible for containing foreign infectious disease pathogens. Understanding the immunopathogenesis of these infectious disease agents may be important for better diagnosis, treatment and vaccine development.

Ebola virus (EBOV) is a RNA Filovirus that is no stranger to the African continent. It was first discovered in an outbreak in the Democratic Republic of Congo (DRC), formerly Zaire in 1976. Many of the subsequent outbreaks have occurred in that region of the continent, including the current outbreak in the equatorial province (55 cases, 28 fatalities).

During and after these EBOV outbreaks, surveys were conducted on healthy individuals from the same geographic areas. The results found variable rates of EBOV antibody positive in the individuals. Given the high case fatality rates of EBOV, scientists began to ask if a less lethal variant virus could exist or if natural immunity to the prototypic EBOV could be responsible.

EBOV came to Lagos on 20 July, 2014, as it was carried by a diplomat from Liberia. The Federal and Lagos Ministries of Health activated the incident management system which successfully contained ‘the virus spread within 93 days.

Professor Sade Ogunsola played an important role in the Infection Control Division of the Incident Management System where we decided to collaborate on a study of the immune response in EBOV survivours and exposed contacts. We decided to work on the development of a T cell based assay, measuring both CD4 (helper) and CD8 (killer) responses to EBOV proteins such as a major envelope protein (Glycoprotein, GP) and the viral protein 40 (VP40).

Although EBOV disease research has been limited on people, it is thought that an early and robust cytotoxic T cell response is correlated with survival. In addition, early conversion from IgM to IgG responses may blunt the severe disease course. Passive immunotherapy with convalescent or monoclonal antibodies has been shown to prevent disease in animal models, but it is yet to show successes in clinical trials on people. It is considered that the antibodies of the EBOV envelope glycoproteins may be protective in a vaccine candidate. This is the basis of the current experimental vaccine (RVSV-ZEBOV, Merck) now being used in the current DRC outbreak.

Research in nonhuman primates have shown that candidate EBOV vaccines require a strong antibody response to contain the virus, but that a T cell response is critical and required for protection.

In order to measure T cell response, we needed a system to generate the viral antigens to the relevant cells. We used a modified anthrax toxin which was no longer lethal but retained its ability to enter the cell and process its genetic material through the endoplasmic reticulum to be expressed on the host cell membrane via the Major Histocompatibility Complex (MHC) class 1 pathway. By engineering the toxin, we could express portions of the EBOV viral proteins to serve as targets and then measure the T cell responses in vitro with patient cells, in an Eli-spot assay.

I want to acknowledge the CMD of First Consultant, Dr. Benjamin Ohaeri, for his leadership and sacrifice during the outbreak, but also for his support in the conduct of this study. Many of his staffers participated in our study.

The family of human Flaviviruses are spread by mosquitoes and include a number of important human pathogens, including Yellow Fever virus, Dengue virus, West Nile virus, Japanese Encephalitis virus and Zika virus. There are an estimated 400–600 million infections on an annual basis.

The clinical manifestations range from mild fever, arthralgia, headache, maculopapular rash to haemorrhagic fever and death. Owing to its similarity with other fever-causing pathogens, it is often misdiagnosed. The mosquito vectors include Aedes aegypti and Aedesalbopictus.

Currently, there is an effective licensed vaccine for Yellow Fever virus.

Although, Flaviviruses generally cause a short self-limiting disease, specific diagnosis is difficult, owing  to their close genetic relatedness and cross-reactivity in typical antibody diagnostic tests. Depending on the antibody test used, it may be difficult to distinguish Dengue from Zika, West Nile virus or even Yellow Fever virus without nucleic acid testing.

Zika virus was first discovered in a sentinel monkey in the Zika forest of Uganda. The sentinel monkey had been a part of the Yellow Fever virus surveillance. It was later isolated from an Aedesafricanus mosquito in Uganda. The first human case of Zika virus (ZIKV) was discovered in a Nigerian woman with jaundice, fever, headache and joint pains in 1954. In the 1960-70s, Professor Fagbami and others conducted extensive studies on ZIKV in Nigeria.

Fifty years later, ZIKV caused an outbreak in Micronesia (2007), followed by the large 2014-15 outbreak in the Americas. In Brazil, there was a rapid transmission and infection with ZIKV and an estimated 1.5 million were infected, along with the surprising association of microcephaly and Guillain–Barre syndrome. The ZIKV epidemic spread through Central and South America, the Caribbean and even the southern states of the United States. By 2016, 40 countries and territories had reported ZIKV transmission.

This global cartogram of HIV (World mapper) depicts the size of the geographic territory based on HIV prevalence.

HIV-1 is divided into a large family of related subtypes and circulating recombinant forms (CRFs) with differing distribution across the globe. West Africa has some of the diverse groups of HIV-1 subtypes including CRF-2_AG, G, A, CRF_06.

A National HIV drug resistance study was conducted in 2014–2015 in Nigeria. 430 children <18 months of age were tested, all from 15 laboratories statistically distributed throughout the country. From dried blood spots (DBS) samples taken from these HIV infected infants, 48% showed at least, one HIV drug resistance mutation.

I have tried to describe some research findings on 3 pathogens that are responsible for the epidemics or outbreaks in Nigeria. Continued research on the immunopathogenesis of these pathogens would promote our understanding of disease development and improve our prospects for effective diagnostics, drugs and vaccines.