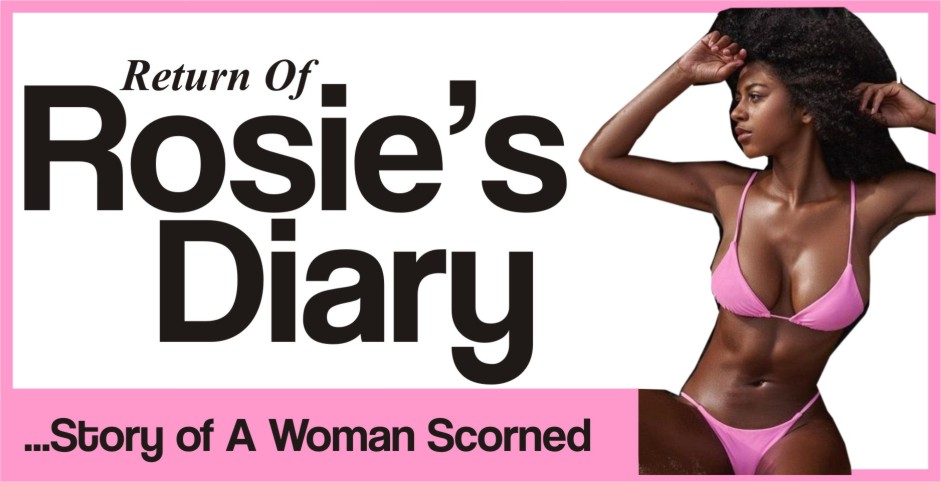 She was a very sensitive woman. Nothing around her ever went unnoticed. She could easily see through me and suspect something was wrong.

“Rosie, Rosie!” Aunty Flo called me when she joined me in the kitchen tidying up. She only usually called my name that way whenever she was excited about something. “How was your day?”

“It was fine, ma,” I answered, barely looking at her in the eye. The guilt. She must not see it.

“Let me taste your food,” she said as she opened the lid of the stew pot and scooped a little on her palm to taste. “Hummnn…sweet as always. My sister really trained you well. It’s only this pregnancy thing that’s the problem,” she lowered her voice, touching on the one subject that was my greatest nightmare.

“And talking about it, how are you feeling? Are you experiencing any serious discomfort yet?” she asked like if I told her I was feeling any sort of discomfort she was prepared to help me get rid of the pregnancy.

“No, Aunty, not really,” I told her, trying to meet her gaze this time.

“But what about my husband, hope he didn’t get too close to you today to notice anything strange about you?” she suddenly threw at me. My heart slammed hard against my chest. What was he talking about? Did she already suspect something was wrong somewhere? Or was she smelling her husband’s body on me?

“I’m just asking if my husband has not noticed anything unusual about you today, considering that he came home early and may have had plenty of time to watch you move in and out of the house. He could suspect you’re pregnant or something and that could be a problem for me, you understand what I’m saying, right?”

I nodded. “Yes, ma. But I don’t think he… he noticed anything, otherwise he would’ve asked me,” I said to her.

She thought about it and then nodded in agreement. “Yes, you’re right, Fred will certainly ask questions the moment he suspects something is not right with you.”

“But, Aunty, “I said to her, just out of curiousity. “Are you really not going to do anything to help me get rid of this pregnancy? For how long do you think I can hide it before it becomes obvious that I’m pregnant?”

Aunty Florence started to look at everywhere but at me. The question obviously jolted her and she had no ready answer for it. I needed no one to tell me that this woman had no good plans for me, the only reason why she brought me to Lagos was to use me achieve her own goal at my own detriment.

”Rosemary, how many times are we going to have this conversation now?” she said to me, lowering her voice. “Listen, I am going through a lot of spiritual programmes right now and what the prophets have all told me is that once I can get a woman who is very close to me to give birth to a baby while living under my husband’s roof, that shortly after, I will also conceive and hear the cry of my own baby. They even suggested I let my husband take another wife but I said no, I can’t. What’s the benefit of me getting pregnant only to lose my husband and my marriage afterwards. So, please, don’t let this opportunity slip away from me, Rosie darling, I beg you…”

“But, Aunty, what happens to me? How do you expect me to be a mother at this young age of mine?” I shot back at her, the anger inside me rising. “You’re not even thinking about me, my future, my life…how am I expected to cope with….”

“Will you just shut up and let me talk!” Aunty snapped at me. She was visibly incensed. Her eyes had turned red with rage. “Listen, was I the one who asked you to get pregnant in the first place? You were sent to school to learn, is that not so? But instead you chose to go and get pregnant and now you’re talking to me as if I am to blame for your pregnancy!”

She paused, fuming seriously and then continued, “Did I even promise you I was going to help you abort the pregnancy? What your mother wants is for me to make sure nothing happens to that baby in your womb, so how have I done wrong if I say you must keep the pregnancy at all cost? Please, don’t get me mad this evening!”

Her voice had gone up a little. It must’ve caught the ears of Uncle Fred because he came and stood by the kitchen door moments after.

“Is everything alright? I was hearing your voice like something was wrong….” Uncle Fred asked, looking straight at his wife, searching for the answer to his question. But Aunty Florence said not a word. She just smiled back at him. And when he found he was not getting any answer, he turned to me.

“Rosie, any problems?” he asked. I beamed him a big smile. “No, Uncle, Aunty and I are just talking,” I said to him.

Aunty Florence turned to me, her eyes filled with “Don’t you dare mess things up for me, Rosemary, I am warning you. That baby you’re carrying means everything to me, don’t let anything happen to it, or else you and I will have a big fight!” And without a word more, she left the kitchen…..