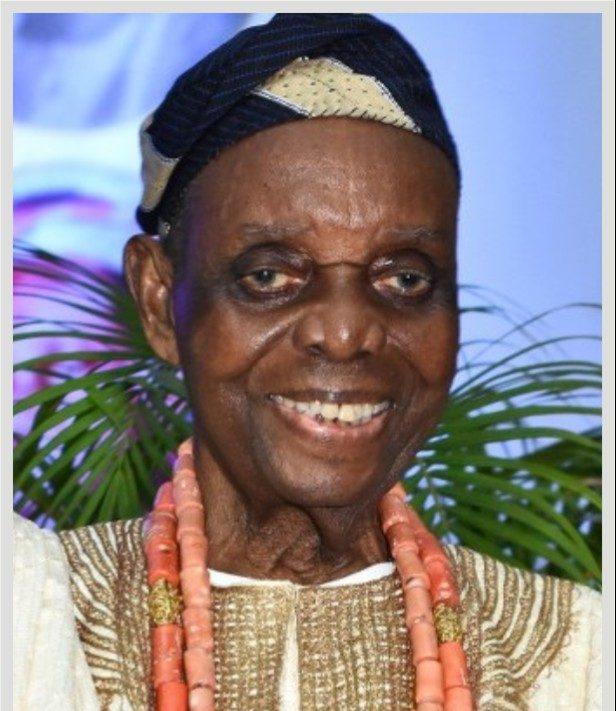 •How He Became The AROLE (Head) Of OMISORE Family Dynasty

On Friday 26th August 2022 Pa (Engr) Ezekiel Iyi Omisore celebrated his 95th Birthday in Lagos. It was at the Yoruba Tennis Club, Onikan Lagos. Because of the accomplished man that he is, a lot of distinguished Nigerians attended the celebration in his honour.

He has been the Arole of the Omisore Dynasty since 2015. What does this really mean? It dates back many years. We can tell you about it, starting from the time of Ajani Anibijuwon Omisore, the Progenitor of the dynasty, who was the son of LAAKAYE – a great warrior. Omisore’s mother, Madam Lasemiju, was one of the many wives of Laakaye, a famous Ile Ife Chief and Warrior. She was in search of the fruit of the womb for many years.

After a long search, the divination revealed that the woman should not use any herbs nor approach any herbalist, but fetch the ‘Osun Odo’ (pond) water, pray into it daily and drink it that by the power of Olodumare, she shall conceive. True to prediction, Lasemiju got pregnant after many years of fruitless efforts.

Laakaye looking back, saw the baby as precious, and thus gave him a unique name, AJANI (Struggled to have), ANIBIJUWON (Child of special or prestigious birth, than others), OMISORE – Omi-se-mi-lore (God of water has done good things for me).

Today, we have a pond shrine, Osun-Odo on Laakaye Street at Ogbon-Oya. Though not worshipped by any believer because of the advancement of the Omisores, no one looked at the way of Osun Odo.

Symbolically, the Omisores don’t need to embark on using fetish power; when they pray into ordinary water it is capable of performing miracles for us like our Matriarch – the mother of Omi-seemi-loore, the great!

The name, Omisore (Omi-se-mi-loore), was given by the mother to express her happiness after waiting for many years, now having a child of her own at very old age. That only son, today has produced hundreds of thousands of offspring and spread the world over. The greatness of Omisore was traceable to the grandmother of Omisore, who was a dedicated and loyal wife to her husband-the ‘Araba Ifa of Ife’, who left town when he realised he was being hunted to be killed by the then Ooni. While other wives absconded and never bothered about the whereabouts of Araba, their husband, Omisore’s grand mum out of love left Ife in search of her husband. After many months of search, she located her husband who has already turned wild and sworn not to return to Ile Ife again.

Appreciating the love, dedication and loyalty of his wife, urged her to go back to Ile Ife. He prayed heartily for the woman and prophesied that her daughter shall have a child, whose name shall be heard all over the world. Today, the only child, like the biblical Abraham, multiplied; blessed so much that his offsprings are over 150,000; spread all over the world and in all works of life.  One unique beauty about OMISORE is that all his children and generations after have continued to bear his name as the official surname.

The young Omisore rose to become a mighty and highly respected Chief in town. He became the traditional High Chief of Ife, Lowa (the 2nd in command to the Ooni of Ife). Because of his charisma, powers and larger-than-life image, he was adored and revered so much. His title was rephrased and he was popularly addressed as “Chief Lowa’ku”, of Ife. This reflected his extreme power, to do and undo.

Lowa’ku Anibijuwon was described as Father Abraham of our time because he was able to raise a large family through his many wives which were not less than forty (40) with at least thirty (30) of them giving him nearly a hundred (100) children during his lifetime.

Anibijuwon preached love and unity among his children and was intelligent, warm, and friendly and imbibed in the children’s unity and communal living, so much so that they all grew to love each other.

Anibijuwon though a traditional religion adherent and had no Western education but was a very smart man, to expose his children to western education…this largely helped in grooming sound and educated children. His liberal attitude to religion equalled made his children spread themselves into the two foreign religions (Christianity and Islam) which later played leading roles in town in the development of the religions.

Lowa’ku was clever to marry key families in and outside the Ile Ife town and equally gave his many beautiful daughters’ hands in marriage to prominent families in town, thus consolidating his hold on Ile Ife.

Anibijuwon became a giant, so much so that he had to manage his growing stature and image, so as not to run into trouble with reigning Ooni Ademiluyi. Omisore was a wise man and very contented. His wise counsel in guiding and insisting on the choice of Prince Adesoji Aderemi for the Ooniship stool gave him out as a man of wisdom and high pedigree. Ooni Aderemi, who later became his Inlaw ruled for 50 years, bringing prosperity and development this has continued to etch the name of Anibijuwon in gold, in the history of Ile Ife-A positivity that has continued to rub on his offspring till today.

On the fateful 18th day of March 1941, the great man died and was buried..leaving a huge vacuum and the wise children subconsciously began to build a Dynasty.

Firstly, all grandchildren began to drop their names (as a surname) for their children and their father’s name-Omisore was used in its place. Till today, all descendants of this great man, adopted Omisore as their surname-OMISORE-What a Brand?

The very united family, quickly saw the need for a Central leadership to fill in the gap of their departed progenitor, hence his most elderly son, Chief Shittu Olasoji Omisore, who was already a traditional high chief hierarchy became the first AROLE/Head of the family Dynasty in 1941. Below is the list of Aroles that have sat over the esteemed stool of the Dynasty-A family with a population greater than most towns.

The Arole must Shepherd the family worldwide, as it’s generally believed that there is no hamlet, town, city, state or country, one would not find an Omisore-A one single family that is reputed to be the largest in West Africa.

Arole Iyiola Omisore climbed the exhausted seat of his forefathers in 2015 at the advanced age of 88 but took the bull by the horns, driving and moving the family forward.

(i) He united the family into one fold, with regular presence at family Akodi

(ii) During his time the family Akodi(Hall)was well equipped and the increase in the enthusiasm of family members to host meetings was on the rise.

(iii) He strengthened the hold of the family on the Anibijuwon’s villages and towns like Olode town and supervised the smooth replacement of the departed Oba Olajide Omisore.

(iv) During his time he secured the discovery of vital mineral resources at Olode, a major plus to the family economy.

(v) Arole also was able to embrace a modernised method of reaching and uniting all Omisores, spread worldwide by the setting up of a virile and effective Whatsapp platform, OMISORE DYNASTY PLATFORM; popularly referred to as DNY.

(vi) Arole equally brought honour to the family by being installed the Baba Ijo Anglican Cathedral, Aiyetoro Ile Ife(Taking after his father, Late Pa Richard Oyebanji Omisore, who once occupied the same seat while alive).

(viii) He equally led the family to reunite with its Yannigan-Olojo root. Today, Omisore has linked up with its root..hence solidifying its grandfather’s, Ife Royal family linkage.

(ix) He is one of the Ile Ife’s Leaders of Thought .i.e Royal advisers and keg of wisdom to Ooni Okunade Sijuwade and even the current Ooni Babatunde Enitan Ogunwusi, who holds Baba Arole, very high esteem.

(x) Most importantly as the Arole, he embarked upon the reconstruction of the over 140-year-old building of Lowa Anibijuwon, which was partly pulled down but reconstructed in such a way that the old art and age-long features of the building especially its Brazilian wooden treatment and staircases were retained. It’s also part of history that one of his children is single-handedly financing the project. The cultural edifice is to contain a Museum that would showcase the dresses, artefacts and other paraphernalia of the office of Lowa Anibijuwon Omisore, thus keeping the legacy of the progenitor alive for generations yet, unborn to know. We pray that our Arole shall live long enough to commission the project he started.

THE FLAGSHIP OF THE FAMILY

Arole Engr. Ezekiel Iyiola Mosadoluwa Omisore has continued to remain the flagship of the family.

Engr. (Chief) Ezekiel Iyiola Omisore was born in Ile-Ife to the family of the Great Omisore Dynasty on the 26th of August 1927. He attended Aiyetoro Elementary School and later to the prestigious Oduduwa College in 1943. He finished his secondary school education in 1948 with a GRADE 1 result in the Senior Cambridge Certificate.

Thereafter he moved to Lagos to work and rise to the level of a Produce Inspector with the likes of Mr Tunde Johnson and Chief Kola Daisi.

His relationship with Tokunbo’s mum Late Oyinkansola Omisore (nee Alakija) commenced the same year with a marriage blessed with two children before their return to Nigeria in 1959.

He got employed by the then Western Region Government in the Ministry of Works as the First Nigerian Structural Engineer, but later left the Ministry to start the Engineering Section of Design Group as an Associate Partner in 1961.

To project his ability as a Nigerian Engineer, he resigned to start his own Consultancy Firm in 1962 by registering IYI OMISORE & PARTNERS. In 1963, He invited his friend Late Engr. S.A. Afolabi to form OMISORE, AFOLABI & PARTNERS. This firm of Engineers has as under listed some notable works to their credit among others:

The firm later changed its name back to IYI OMISORE & PARTNERS after the death of Engr. S.A. Afolabi in 1979.

Some of the notable works further handled are:

HONOUR TO WHOM IT’S DUE!

Recently, he was honoured at the Sheraton Hotels, Ikeja, with the prestigious “Engineering Lifetime” Awards. The nonagenarian has been so honoured as a founding member and the only surviving member, of the five (5) founders of the famous Engineering Consulting Association.

He became the GBOBANIYI OF ILE-IFE in 1980, The ALATUNSE of The Cathedral Church of Anglican, Ayetoro, Ile-Ife in 1986 and The ASIWAJU OKUNRIN Isokan Onigbagbo Christian Association of Nig. (CAN), Ife East Central Local Government in 2005. He is a member of Lagos Island Club, Lagos Metropolitan Club and Yoruba Tennis Club.