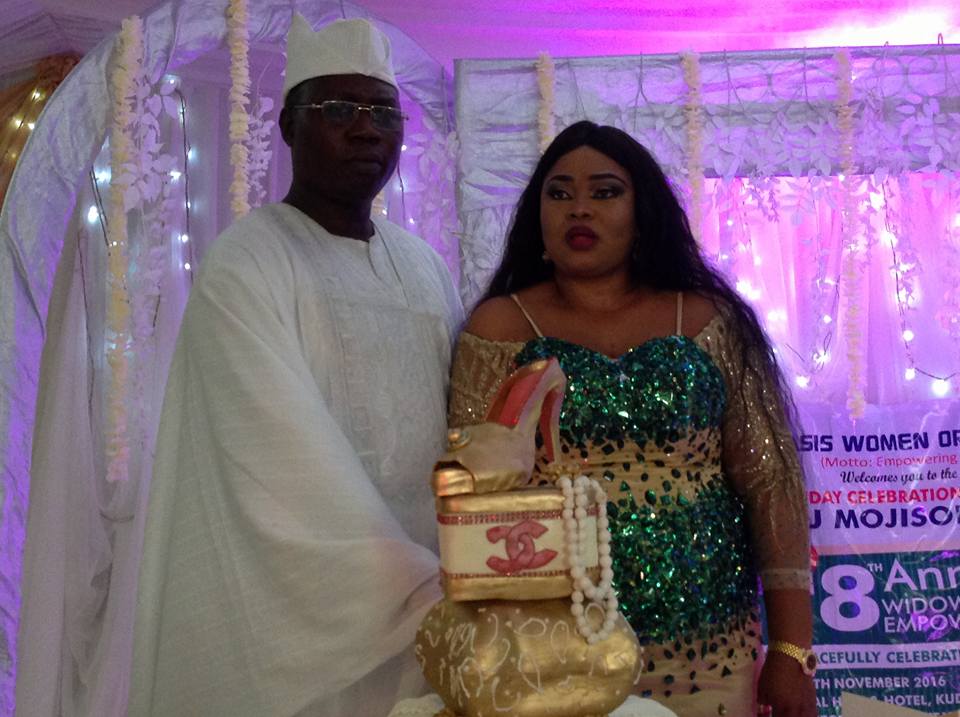 Quiet, unassuming and clearly a beautiful woman, Erelu Mojisola Adams is the charming wife of Otunba Gani Adams, the leader of the popular pan African group, OPC. A very warm, humble and friendly woman, the mother of two was gracious enough to share with City People’s WALE LAWAL their love story, how they met, the challenges of being married to a man like Otunba Gani Adams and her love for fashion and the good life.

May we meet you, ma?

I am Erelu Mojisola Adams. I am from Ondo State, Ondo town precisely. I was born into the family of late barrister Oladayo Fasan and Mrs. Comfort Fasan. I had my primary education in Ile Ife, Obafemi Awolowo primary school and then Government Secondary School, Ijanikin. I had my HND banking and finance in Kwara state and I’m back in school presently, studying Law.

How did you meet Otunba Gani Adams?

I met him while in school at Ilorin. I didn’t even know he was the Gani Adams everyone was talking about then. He came to my house to visit a friend and we met. We became friends and we started talking. It wasn’t until one day when a girlfriend of mine came to my house and saw him, and then asked if that wasn’t the same Gani Adams that had become so popular at the time. I didn’t know what she was talking about because while in Ilorin I seldom came back to Lagos for the holidays, so I really didn’t know much about what was happening in Lagos then. I knew nothing about OPC and their activities. It was the lady who told me all about their troubles with the government and their fight with the authorities and so on. They even said he sucked human blood, used human beings as sacrifice, and so many frightening things. When I asked him if he was the same Gani Adams I’d heard about, he said, yes, he was. He was surprised that I didn’t recognize him. He then asked if I wanted to run away from him now that I knew who he was and I said, “No, just that you should’ve told me about all this before now.” And of course he denied knowing anything about blood sucking and human sacrifice, and I believed him. And having been married to him for many years now, I can tell you my husband is nothing like that, he’s a complete gentleman.

How long have you been married now?

Our marriage will be twelve years old this year

And you’re blessed with how many kids?

What has it been like being married to man like him who spends more time on the streets fighting injustice and confronting government of the day?

I will be honest with you, it hasn’t been easy. I never dreamt of a married life like this. I wanted a quiet life. A very quiet and private married life. But then, when God says yes to a union like this, nobody can say no. I came from a family that was so closely knit. Our father was always around. We will sit down together, gist, laugh and play. Although, when we first started, things weren’t quite as serious as this. He wasn’t this big and popular. At the time we met, he was a wanted man so he was compelled to live a rather quiet and restrained lifestyle. Twice in my presence, he was arrested. By the time he got out of detention the second time, things began to really heat up. He became very involved in activism. People began trooping to the house every minute of the day. Lots of activities were taking place in the house. I became uncomfortable. When I asked him what was going on, he said it was only temporary, that things would soon return to normal, but , as you can see, we completely lost that privacy because OPC soon became even bigger than he expected. Even my parents had to call me when they became worried too, but I told them I would cope. Well, today, I thank God for everything, I am still enjoying my marriage.

What kind of person is Gani Adams at home? The picture people have of him is that of a man who has some super natural powers to face an army, totally annihilate them and even disappear when the battle gets too tough for him, is any of these true?

(She laughs) There’s no doubt about the fact he’s into a lot of cultural and traditional practices, but these do not translate to mean he has the kind of powers people say he has. I am a Christian while he’s a Muslim but he allows us to practice both religions. At home, he is a different person, although, sometimes when we have our little arguments as man and wife and he starts to harass me (she laughs) I always remind him he is now at home, and so he should drop that Gani Adams that people know outside the gate because he’s now at home with his family. Naturally, he’s a free and humble man. He had a very humble background and it rubs off in his lifestyle.

Considering that he can be a very busy man, how much of him do you and the kids see at home?

Well, he tries to spend time with us. Sometimes, he can be at home for almost a week and not go anywhere, but the next minute he could be away for a whole month. But we try to bear with him, we can’t deprive him of a job that gives him so much joy and fulfilment.

He must definitely take you and the kids on trips outside the country once in a while….

Well, not too long ago, we were all in South Africa and he took us to really exciting places. We even visited the late Nelson Mandela’s house.  But most times though, I do travel with my kids on our own, especially when I see that he has been too busy to have time for us.

How romantic would you describe your husband? Is he the type that gets you flowers, buys you cards, gifts and stuffs like that?

(Breaks into the laughter) Except if you want me to package him, then I will tell you it’s a NO! Ah! He’s not that kind of person. He doesn’t have time for such things.

What is that part about him that you really like and admire?

I think it is his ability to let things go easily. He’s a free giver. He overlooks things that would have been a big deal to many people.  That’s why I’m shocked at this open battle he’s having with Tinubu. Normally, the man I know would’ve let it all go long before now. He believes that in life, there’s no permanent friend, no permanent enemy. My husband is a simple man in a way, he loves to take life the way it comes.

What’s your fashion statement like? What kind of outfit are you usually comfortable in?

Where do you like shopping, especially when you’re not in the country?

I don’t really have a specific place. I shop anywhere so long as I can find stuffs that I like and it’s genuine, then I’m okay. For my gold, though, I prefer Dubai. Yes, it’s cheaper there, but you’ll also see varieties in Dubai. They have their 18 karat, they’ve got their twenty two and twenty three.  So, if I want to do anything gold, I head to Dubai. For English wears, especially casuals, I do that in the UK. Same for my kids.

The Many Secrets Of GANI ADAMS – Wife, Erelu MOJISOLA ADAMS Reveals was last modified: May 16th, 2017 by Daniji Emmanuel

How Kenny Jones Became a Designer for...

Why I Am Running For EKITI Governorship...

I Enjoy My Role As The Defender Of...