Home News The Pilot in Command, Perowei Jacob who died in the Air-force plane crash while fighting Boko Haram got married 3-weeks ago (Photo)
News 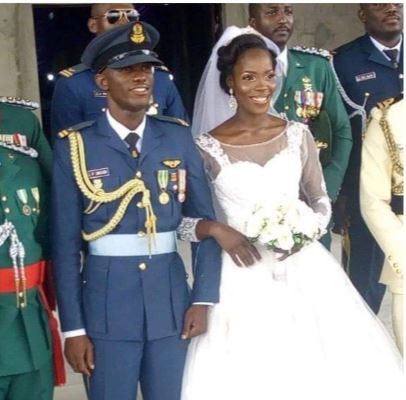 On Thursday, the Nigeria Air Force announced the death of five crew members that were onboard the military helicopter that went missing in Borno state on January 2nd during a fight with Boko Haram members in Damasak.

A statement by the Director of Public Relations and Information Nigerian Air Force, Ibukun Daramola confirms that Flight Lieutenant, Perowei Jacob was the Pilot in Command when the helicopter crashed.

Sadly, Pereowei Jacob just got married on the 8th of December, 2018 and died on the 2nd of January 2019, leaving his young, beautiful wife a widow after three weeks and two days of marital bliss.

President Buhari in his condolence message said ‘it was sad that the fine officers and men lost their lives in the bid to guarantee the safety and protection of their countrymen’.

He said rather than dampen the morale of troops fighting insurgency in the North-east, the unfortunate development would rather bolster their resolve to completely eliminate all evildoers within the shortest possible time.

To the families and relations of the dead, President Buhari condoles with them, noting that the dead officers and men were heroes, who paid the supreme price for peace to reign in the country.

The Pilot in Command, Perowei Jacob who died in the Air-force plane crash while fighting Boko Haram got married 3-weeks ago (Photo) was last modified: January 4th, 2019 by Igbokwe John