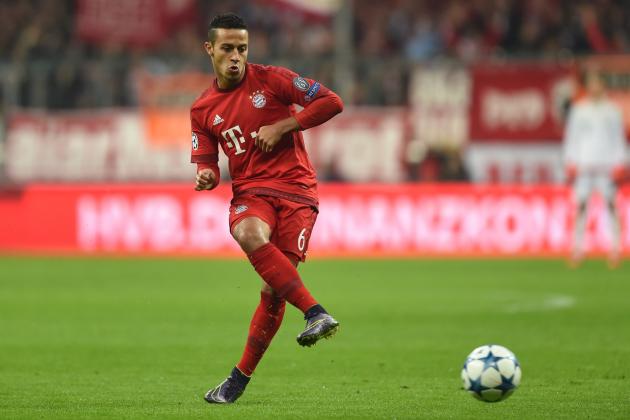 Thiago Alcantara admits he is desperate to win the Champions League with Bayern Munich after signing a new contract with the Bundesliga champions.
Bayern confirmed on Friday the Spain international has extended his deal until June 2021.
Thiago has won three Bundesliga titles and two DFB-Pokals in a hugely successful four years since joining from Barcelona but he has yet to get beyond the semi-final stage of Europe’s elite club competition.
Bayern were knocked out by Real Madrid in the quarter-finals this year and Thiago is determined to get his hands on the trophy before he considers a future away from the Allianz Arena.

? @Thiago6: "I want to win many titles with #FCBayern in the future." #Thiago2021 pic.twitter.com/8oqxAIK0Sz

“One hundred percent,” he told the club’s TV channel when asked if the Champions League was now his aim. “My goal is the same as it has been in recent years: I want to win the Champions League with this club. I’ll stay here until I win this competition.
“[The renewal] means that I will be here for a long time and I will try to win even more games and titles in the coming years.
“I’m very happy to work for this club, this team and these people here at Bayern. We’re very happy in Munich. I have my kids here. Everything is perfect.
Bayern, who are eight points clear at the top of the Bundesliga, face Wolfsburg on Saturday.