Home News How I Toasted My Wife, FUNMI, As An Ungrad. In UNILAG – Demola Olota
News 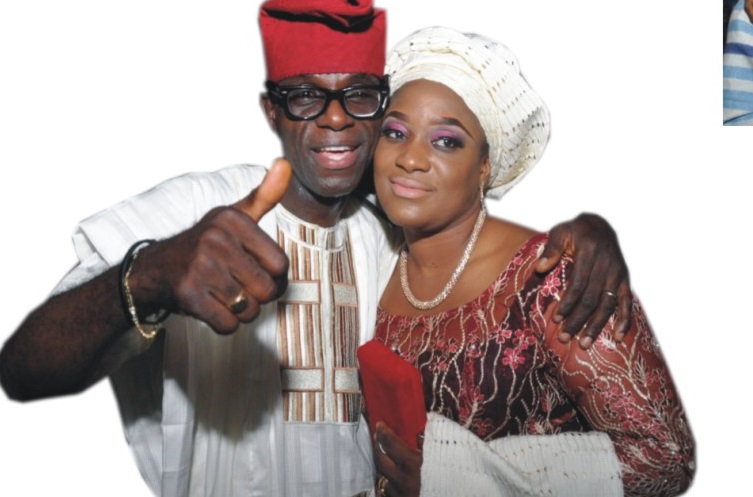 A few weeks back, a prominent musician, Demola Olota paid a courtesy visit to City People corporate office in Lagos for a roundtable discussion with the Showbiz Desk of the media house. The singer and bandleader, who felt at home, opened up on a number of topics, but the one that we found very interesting was the angle of how he met and toasted his pretty wife, Funmi.
Demola Olota is a veteran in the music industry. He is well known by top players and has more than 20 years experience in producing and delivering good music, as well as performing at weddings and prestigious events. Demola also known as Damota, studied Music at the University of Lagos, majoring in Voice, Music Theory and Choral training. He studied under the tutelage of the globally acclaimed Professor Laz Ekwueme and brought that level of excellence into his music. For the past 20 years, he has led De Clique Vocals/Band and performed for a diverse range of clientele within and outside Nigeria, in government, banking, oil and gas, manufacturing, academic and diplomatic sectors, especially the UK high commission as well as the United States, Norwegian, French, and German embassies.

Olufunmilola Ibironke Olota is the lovely wife of Demola. She is his jewel of inestimable value and daughter of Zion and a Montessori trained Educationist and School Director of Blooming Lights Montessori School. They are blessed with 4 lovely children: Ireayooluwanitemi, Oluwafikunayomi, Oluwajomiloju, and Ifeoluwamuyiwa. From the excerpts below, we bring you the story of how Demola Olota met and married his wife. The challenges he went through and the things he loves the most about his wife.

It’s the love season; tell us about your journey into love

When I was at the University of Lagos, there was a girl Iwent after for 3 years. The first year, people told her not to answer me. A big lesson in life is that you beware of dream killers. People told her that she was a fresher and not to date me. I was very passionate about her, I like her because she plays the piano and that attracted me to her. Moreso, her father is a Medical Doctor. One day, the girl told me that I love music a lot and she can’t come in as 2nd place.

You got married to a very beautiful woman. Tell us about her.

It’s just God’s blessing. I’m just blessed. God was the one who blessed me with a very beautiful wife. People used to look at me and say, “Demola, you this jagajaga boy, where you see beautiful wife?” (laughs).

One of them is that my wife is a very beautiful woman. She read English at the University of Lagos. I told you of the story of a girl I chased for 3 years earlier, then the girl messed up. I trained a choir in my church and my wife was part of the choir then. Her mom knew me then. One day, it was late after practice, so I drove her to her house. When her mom saw me, she ushered me in with excitement because I was the organist in the church. That was how my wife and I started talking.
Another striking thing is that my wife, Olufunmilola Ibironke Olota is connected to the story that I would tell you now.
My salary as an organist when I started in 1990 was 3500 naira.

Then there was a boy in Unilag who had a 504 car, he gave it to me to use as cab. So then I was saving money to buy a car of my own. As God would have it, one day I was passing through Sabo and I saw a car for sale. It was a Toyota. I bought the car and drove it for 8 good years. How did I get the money to buy the car? I wrote a letter to the man that employed me as an organist in his church. I was applying for a loan. The man approved the loan and gave me my salary for a whole year. My father, mother and 2 Reverend fathers signed the agreement. The agreement was that I would be paid my Salary for the whole year but I must be be punctual to church and carry out my duties as the organist for the whole year. I stayed a whole year without Salary. I wore just one shirt for the whole year.

My friend used to make jest of me. So for a year I had no salary but I drove the car for 8 years and I was happy. It was when I wanted to get married, that I sold the car. One day, the car had an issue and I was determined to fix it. So I took it to the mechanic and gradually I was changing the parts of the car that needed fixing. The car was blue, they fixed a red bonnet for it and as time went on, when the car was fixed, it was multicolour.

Where am I going with this story? My wife saw the car and asked what was this? My point is, an average beautiful woman would not follow a guy like me. But my wife stayed with me all through. That’s what qualifies my wife. My wife is full of surprises. I told myself, one day I would spoil her silly. God should just bless me with billions of money, I would lavish her with it, because she is a good woman.

How I Toasted My Wife, FUNMI, As An Ungrad. In UNILAG – Demola Olota was last modified: February 25th, 2018 by Reporter