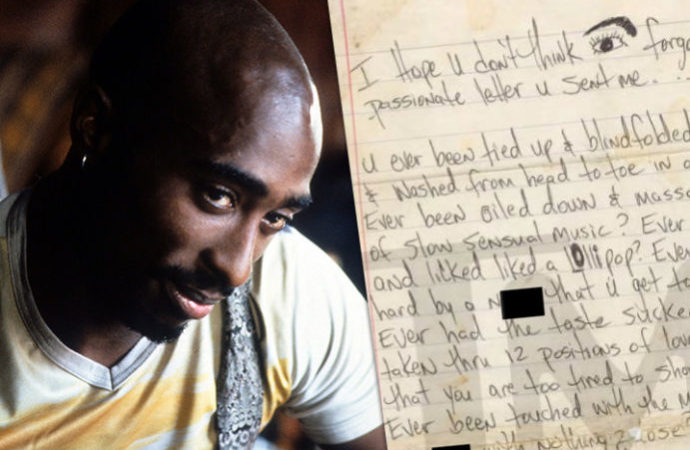 A hand-written love letter by late African-American rapper and actor Tupac Shakur has been offered for sale at 25,000 Dollars, 20 years after his death.

According to Goldin Auctions who displayed the legendary love letter on hits auction block, the romance poetic prose was written by Tupac during his 1995 prison stint.

“Tupac wrote this letter to his paramour in black pen.

“The letter is incredibly explicit, and is a reply to a “passionate letter” received by Pac.”

The letter describes the ‘sexual gymnastics’ that Tupac wishes to perform with his partner, in extremely vivid detail.

It includes an eye that Tupac drew and he mentioned blindfolds, bubble baths, oily massages and “12 positions of lovemaking”.

Tupac was a vocal participant during the East Coast–West Coast hip hop rivalry, becoming involved in conflicts with other rappers, producers, and record-label staff members.

On September 7, 1996, he was fatally shot in a drive-by shooting and was taken to the hospital where he died six days later at age 25.

Tupac was one of the most popular rap artists in the world during his short time in the spotlight.

He has been ranked by Rolling Stone as 86th on its list of the 100 Greatest Artists of All Time.