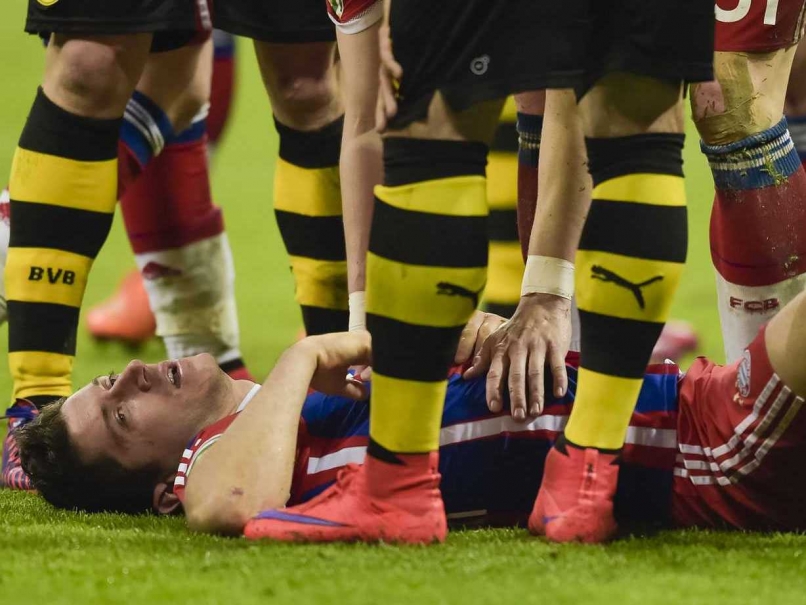 Bayern Munich coach Carlo Ancelotti will make a late call on top scorer Robert Lewandowski before Wednesday’s Champions League quarter-final meeting with Real Madrid.
Poland international Lewandowski took his goal tally for the season to a phenomenal 38 in 40 matches with a double as Bayern dispatched his former employers Borussia Dortmund on Saturday.
But the 28-year-old was substituted after 72 minutes with a shoulder injury during Der Klassiker and only returned to training on Tuesday.
Although Ancelotti told a pre-match news conference at the Allianz Arena that Lewandowski came through the session well, he explained he undertook just 20 minutes of work and must be assessed again before kick-off.

“Robert Lewandowski trained today, just 20 minutes because he had a problem in the last game,” Ancelotti said.
“This morning he had a good sensation. We will check definitely tomorrow. If he doesn’t have pain he is going to play; if he does have pain he will not play.”
Lewandowski also gave Bayern an injury scare ahead of the Dortmund game, when he left training early with a sore hamstring and Ancelotti added: “Of course we have to control what he thinks – he had a good sensation in 20 minutes of training.
“I don’t know really tomorrow if he will be ready or not.
“We have to wait but this doesn’t change our idea of the game, our strategy and the confidence we have for this game.”
Ancelotti confirmed Bayern goalkeeper Manuel Neuer would return having missed his side’s past three Bundesliga games due to a foot injury, although centre-back Mats Hummels (ankle) misses out.