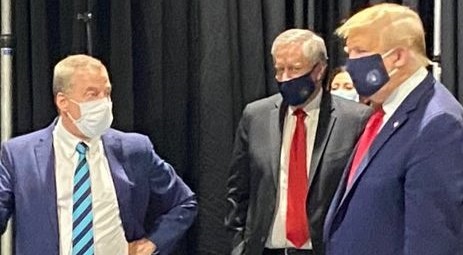 US president, Donald Trump, has finally been pictured wearing a face mask — but away from reporters’ view.

On Thursday, Trump visited Ford motor plant in Michigan, where ventilators and other materials used to combat COVID-19, the respiratory disease caused by a coronavirus, are being manufactured.

The company had placed a strong warning that anyone visiting its premises must wear a mask as part of efforts to combat the spread of the novel disease.

Trump, who was surrounded by executives wearing masks, did not wear the protective cloth throughout in front of the cameras.

He, however, said he wore a mask earlier in the visit but “didn’t want to give the press the pleasure” of seeing him in a face covering — and pictures later emerged of him putting on the mask.

“I had one on before. I wore one in the back area. I didn’t want to give the press the pleasure of seeing it,” he told reporters in a video by Sky News while showing off a navy blue mask with the presidential seal on it.

His decision not to wear the face mask during the public portion of the tour has attracted criticisms from several quarters.

Ordinarily, Trump’s visit is a breach of an executive order by Gretchen Whitmer, Michigan state governor, that bans non-essential visits to factories, but the policy was waived for the president, prompting reactions from Dana Nessel, Michigan state’s attorney general.

“I think that we’re going to have to have a very serious conversation with Ford in the event that they permitted the President to be in publicly enclosed places in violation of the order,” Nessel told CNN.

“They knew exactly what the order was and if they permitted anyone, even the President of the United States, to defy that order, I think it has serious health consequences potentially to their workers.”

There has also been debate on whether or not use of masks can combat the spread of the novel coronavirus. According to the US Centers for Disease Control and Prevention (CDC), the use of face masks could reduce the spread of the disease in places where social distancing is difficult to maintain.

The World Health Organization (WHO), however, warned that while face masks may help curb the spread of COVID-19, they were insufficient on their own.