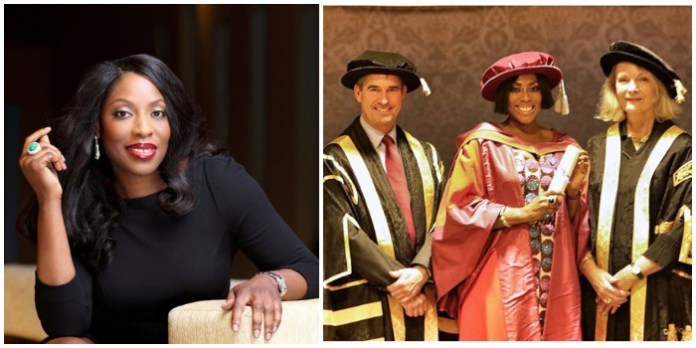 A Nigerian film producer, Mosunmola Abudu, aka Mo Abudu has been awarded an honorary doctorate degree by the University of Westminster.

The British university made the presentation during its annual graduation ceremony at the Royal Festival Hall in London.

Mo Abudu who also doubles as EbonyLife Media CEO announced the degree in a post on her Instagram page on Tuesday.

“I would like to say a big ‘thank you’ to the University of Westminster for awarding me with an honorary degree of Doctor of Arts, in recognition of my contributions to broadcasting and enterprise in Nigeria,” she wrote.

“My second honorary degree! 💃💃💃. It is really exciting to be recognised for doing what you love❤💕💖. I am so humbled and grateful.
Lord, I remain Grateful and thankful in your presence always.🙇‍♀️🙇‍♀️

“I thank the EbonyLife team, partners, friends (my best) and last but not the least my family❤❤❤ who continue to give me all the moral support and prayers that continue to keep me going, even when things get tough.”

In 2014, she received an honorary Doctor of Humane Letters (Honoris Causa) from Babcock University.

The broadcaster and filmmaker attended Westminster in 1993 where she completed a master’s degree in Manpower Studies.