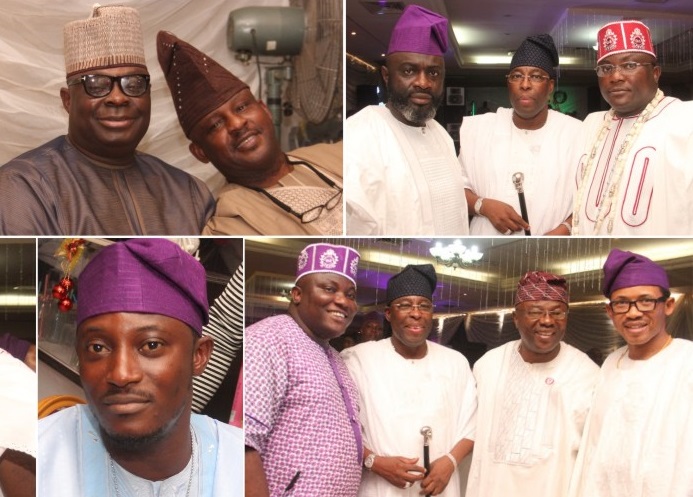 Apesin Muyiwa Ibeun  is a Lagos big boy, who also plays big in Abuja. He is the President MU’IB group of companies (MU’IB Oil and Gas) and the General Secretary, Association of Indigenous Construction Contractors of Nigeria (AICCON). He is the Otunba of Isin land in Kwara State and the Apesin Ola of Igbobi Sabe in Lagos State. He is an oil and gas business mogul per excellence.

He is a Kogi born businessman who operates in Lagos & Abuja. He is a Constructions engineer. He is a very classy socialite whose love for the development of his society cannot be hidden. He dresses well. He makes fashion statements with his dressing. Otunba Ibeun has a very high taste for quality music and he is very fashionable. He has a circle of friends with whom he parties and does business with and Below are a couple of them.

The founder of Kayode Ajulo & Co. Castle of Law, Dr. Olukayode Ajulo has been known for his genuine passion towards human right activism since the inception of his career.

His passion for the less privileged when it comes to law practice and defence of the rights of individuals cannot be under estimated. Something very visible with Barr. Ajulo is the visible connection between him and Otunba Muyiwa Apesin. Both men are successful in their chosen paths but they have been seen to always hang out together at many social gatherings.

Barr Ajulo is an Ondo State born founder of a non-governmental organization, Egalitarian Mission of Africa, Ajulo, in his usual manner is up to something new that is entirely out of his law practice. His role at Mama Modupe Felicia’s 80th birthday explained how intimate he is with Otunba Muyiwa Ibeun.

Shina Abiola Peller is the son of Alhaja Silifat and Professor Moshood Abiola Peller. According to Mr Peller, his parents were very strict and devout Muslim.

He is an entrepreneur, politician, industrialist & philanthropist who also doubles as the Chief Executive Officer of Aquila Group of Companies and Club Quilox, one of the biggest night clubs in Lagos. Mr Peller hailed from Iseyin, Oyo State in South-Western Nigeria and studied Chemical Engineering at Ladoke Akintola University of Technology, Ogbomosho, where he obtained his first degree in 2002.

Subsequently, he obtained a Masters degree in Business Management also from Ladoke Akintola University of Technology in 2013. Peller is a member of the All Progressive Congress, and he has declared his intention to contest under the platform of the All Progressive Congress as a member of the Federal House of Representative representing the Iseyin/Itesiwaju/Iwajowa/Kajola Federal Constituency in Oyo State. He is obviously a close pal of Otunba Muyiwa Ibeun as they have been seen on many occassions to have rocked Lagos and Abuja social scenes together on several occassions. He was one of the big-wigs who graced the 80th birthday party Otunba Muyiwa threw for his mum, Mama Felicia Modupe in Ilorin recently.

Popular socialite, Otunba Lekan Osifeso is the Chairman of Lekai Group of Companies and true socialite to the core. He has been very relevant in the social scenes both in Lagos and Abuja.  The circle of Otuba Muyiwa’s big-boys crew would not be complete without his name being mentioned. Otunba Lekan is a classy business who does’t just mingle with anyone, little wonder he is among the top 10 Nigerian socialites who rock the social scene with Otunba Muyiwa.

As a businessman/entrepreneur, Mr.Wemi Jones started Dates and Events Limited to do events planning and event management business with emphasis on provision of conducive events venues.

He is a member of the inner caucus of Otunba Muyiwa Ibeun and one of his favourites at social scenes. He was seen several times talking closely with Otunba Ibeun during his mother’s 80th birthday party recently in Ilorin.

Hon. Adebanji Austin Aiyelabowo, the Senior Special Assistant to Kogi State Governor on Youth Empowerment, is one of the young bloods making waves in the Kogi politics and has aspired many youths to become positively active in politics. He is also a businessman and an entrepreneur who is making waves and has empowered many youths in Kogi. Away from all these, Hon Aiyelabowo is also a socialite. He was among those who rocked Mama Felicia Ibeun’s 80th birthday with Otunba Muyiwa Ibeun in Ilorin recently.

Bashiru Kolawole Kuti, popularly called Bashy Kuti is one of the leading fashion designers in Nigeria. Though he is based in Ibadan, he has a huge clientele base that spans Lagos, Abuja, Ilorin and even Port Harcourt.

His label, BKK ULTIMO is well known. And Bashy has been faithful to his first love, fashion design, for many years with multiple credible awards to his credit.

Over the years, this respected fashion designer, who launched his outfit about two decades ago, has won the confidence of the elites who, in turn, have rewarded him with impressive patronage owing to his creativity which has stood him out. He also believes it’s the key to success in fashion business.

This Ibadan based designer’s office is a Mecca of sorts to celebrities, top politicians and captains of industry. He has been seen on many occasions partying with Otunba Muyiwa Ibeun, he was sighted at Mama Modupe Felicia’s 80th birthday in Ilorin.

WHY THE CONSTITUTION SHIELDS THE JUDICIAL OFFICERS[2] – ERIC TENIOLA