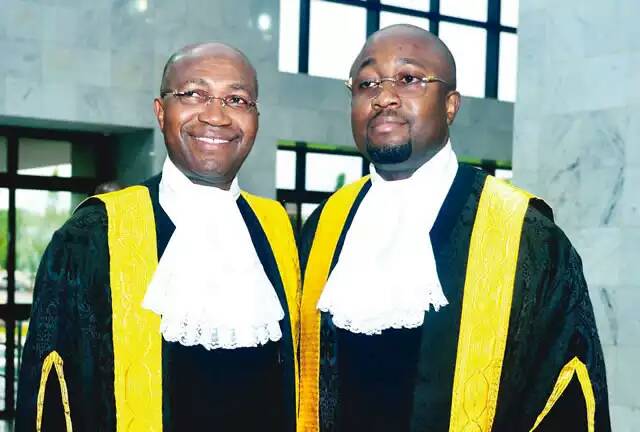 In the last 37 years Chief Wole Olanipekun (SAN), OFR has grown to become one of Nigeria‘s foremost legal Icons in the country. He became the youngest recipient (as at then) of the prestigious rank of Senior Advocate of Nigeria in 1991 at the age of 40 years.

In 1980, he established his law firm with functional offices in Lagos, Abuja and Ilorin with a representative office in Akure and strong professional presence in 29 states across Nigeria and the Federal Capital Territory, Abuja. The same year he  attained the rank of Senior Advocate of Nigeria (SAN),he was appointed Attorney General and Commissioner for Justice of Ondo State where he served in that capacity for two years. Chief Wole Olanipekun (SAN) is one of the industrious sons of Ikere Ekiti whose impact is felt in his community. He obtained his first degree at the University of Lagos where he bagged his Law degree. He has been happily married to Princess Omolara Olanipekun for over 37 years. He is a proud father, as all his 4 children are lawyers and 2 of his in-laws are also lawyers.

He began his active law practice in his father’s chamber, Wole Olanipekun and Co. where he is currently the head of the chamber. It was in recognition of his invaluable contributions to the advancement of the Legal Profession in the country that his name made the list of the new silk in 2015 as the youngest SAN Nigeria ever produced.

He became a SAN after 13 years he was called to the bar. He heads the Dispute Resolution and Policy Advisory Groups. His core areas of competence and interest include Banking and Finance, Shareholder Disputes, Consumer Protection, Domestic and International Trade, Alternative Dispute Resolution and Enforcement of Maritime Claims among others. He also heads the Au Courant Research Group.

He is the Editor-In-Chief of the Banking and Financial Law Reports (BFLR). He is also the chairman of the Advisory Board of the Constitutional Rights Awareness and Liberty Initiative (CRALI). Between 2012 and 2014, he served as a member of the National Editorial Committee of the Nigerian Bar Association (NBA), as well as the Legal Practitioners Disciplinary Panel of the NBA. He was reappointed as the Alternate Chairman of the Legal Practitioners Disciplinary Panel B of the NBA in 2015.

He was a lecturer at the Department of Commercial and Industrial Law at the Faculty of Law, University of Lagos. Dr. Olanipekun serves on the editorial boards of several leading law periodicals and has a number of publications to his credit. He has delivered papers on diverse topics at many conferences and seminars. He is a fellow of the Chartered Institute of Arbitrators, Nigeria and he chairs the Banking and Finance Committee of the Institute. In 2016, he was voted as the outstanding young professional of the year. Oladapo’s experience covers his time at the leading Firms of Femi Atoyebi & Co and Wole Olanipekun & Co, where he was a partner. He is happily married to Mrs Winnifred Oyindamola who also is a Lawyer.

She is a senior associate with the Esher & Makarios Law. She holds a Bachelor of Law degree from the Igbinedion University and Post Graduate Diploma in Law from the University of London. She was admitted to practice Law in Nigeria as a solicitor and advocate of the Supreme Court. She is the editor of the PIVOT, a newsletter that focuses on family rights.

Olubukola Araromi nee Olanipekun is the first daughter of the foremost legal Icon. She is a product of University of Lagos where she bagged her Bachelor of Law (LLB) degree. She is happily married to Tofunmi Araromi.  She works with Securities and Exchange Commission (SEC) Abuja.

Olabode Olutoyin Olanipekun is a lawyer and socialite. This product of University of Lagos where he bagged  a Bachelor of Law (LLB) degree is the Managing partner at Wole Olanipekun & Co.  He holds a Masters degree in Commercial and Maritime Law from the University of Wales, Swansea.  He has vast experience in litigation spanning diverse areas of law in trial courts, specialised tribunals and across all appellate courts in Nigeria.

Over the years, he has been consistently involved in various high-profile litigation on constitutional, electoral, energy, commercial and criminal matters as well as non-litigation transactional legal practice involving various specialised and complex multiparty commercial transactions.  Because of the spread and depth of his experience, he is constantly engaged to offer statutory and regulatory advice to companies and individuals operating in regulated sectors of the economy.  He has also been engaged in dispute resolution proceedings by Arbitration as counsel under various rules. He is happily married to Tolulope Olanipekun nee Martin. Temitope Adesina nee Olanipekun is the baby of the house and she is also a lawyer.

She has an excellent track record of working effectively and constructively across different areas of the firm’s practice effortlessly. She is happily married to Demola Adesina the  son of Chief Dele Adesina, (SAN). Demola is also a Lawyer, he studied Law at the  University of Reading and he attendED Nigeria Law School, Abuja. He did his master’s degree in computer and telecommunications law at Queen Mary University of London. He started his career at Babalakin Co. and he later moved to Wole Olanipekun & Co. in 2010. He is the managing partner at Dele Adesina & Co.