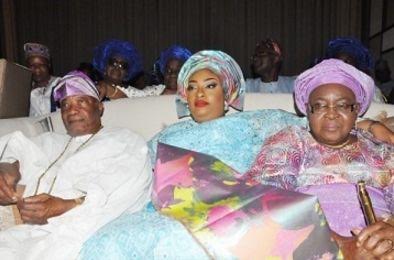 That former president of Nigeria, Olusegun Obasanjo has gotten a new daughter in-law is no longer a news, but the rare personality of this beautiful woman will no doubt make headlines for as many who has encountered her gesture will testify.

Temitope Adebutuis the pretty daughter of pool magnate, Chief Kessngton Adebutu, who is popularly referred to as Baba Ijebu.

Not many will know that Temitope is a magistrate court judge is Ogun state as her humility has preceded her class.

You will recall her unblemished look during the traditional introduction ceremony which was recently held at the mansion of the Adebutu in Lagos when she steps out in traditional royal attire. Temitope is one of the few rich kids who doesn’t believe in any form of skin colour enhancement or bleaching.

This one of the reasons that Obasanjo family will be proud to have her as a wife. Beauty. Brain. Cultured.

The rumours, fueled by her beautifully glowing skin complexion has been airing on social media since her marriage ceremony but the mention of her name on a popular blog celebrities moved her friends and well-wishers to a respond.

Speaking with one of her childhood friend who spoke exclusively with City People, she said her skin complexion has absolutely nothing to do with skin bleaching.

She said: “My friend’s skin tone is as a result of the constant care of her body. She uses natural body moisturisers like every woman and that has simply enhanced her natural complexion rather than bleach it.”

Ayokunle Bukola, a brand ambassador of a moisturising cream company has also jumped to Temitope Adebutu’s defence saying, “my caramel skin complexion like that of Tope Adebutu, is as a result of the use of natural beauty cream, it has absolutely nothing to do with bleaching. Hopefully, people will believe us and allow this matter to be laid to rest.”