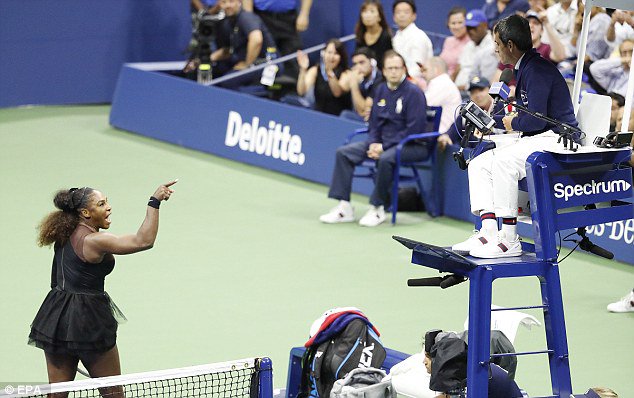 The last certainly has not been heard over US Open ladies final outburst as Umpires are considering boycotting Serena Williams’ future games.

Williams was docked a game during the defeat to Naomi Osaka for verbally abusing umpire Carlos Ramos, calling him a ‘thief’ and a ‘liar’ after he deducted a point from her for previous violations — coaching and smashing her racket.

Now umpires could refuse to chair her matches due to discontent over the treatment of Ramos during the fallout of the match, according to The Times

Following the match Williams cited sexism as the reason for her punishment, claiming that she had been treated more harshly than a man would have been.

This has further ruffled the feathers of some umpires, with an anonymous official revealing there is a growing consensus that umpires are ‘not supported’ by the USTA, while Ramos was ‘thrown to the wolves for simply doing his job and was not willing to be abused for it’.

There are now discussions about boycotting Williams’ matches between a group of umpires that lack a body to represent their interests.

Ramos is deemed one of the more experienced umpires in the game with almost 30 years of experience but for overseeing the Grand Slam final he received a fee of just £370 — a standard daily rate.

Ramos is a gold-badge umpire for the ITF, who have released a statement in support of him.

It read: ‘Carlos Ramos is one of the most experienced and respected umpires in tennis. Mr. Ramos’s decisions were in accordance with the relevant rules and were reaffirmed by the US Open’s decision to fine Ms. Williams for the three offences.