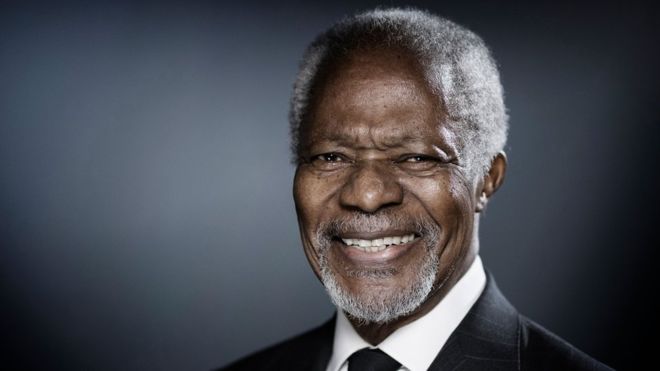 The UN on Thursday paid final respects to former Secretary-General Kofi Annan as the late Ghanaian diplomat is laid to rest on Thursday in Ghana.

The current UN Secretary-General, Antonio Guterres, in his remarks at the funeral of his predecessor, played glowing tributes to Annan, who died on August 18, at the age of 80 years.

The News Agency of Nigeria reports that the UN General Assembly would hold a commemorative meeting to pay tribute to the former Secretary-General on Friday, at the UN headquarters in New York.

Statements, a minute of silence, and traditional African cultural performance are expected to be made in honour of the seventh UN scribe.

“Kofi Annan was both one-of-a-kind and one of us. He was an exceptional global leader.

“He was also someone virtually anyone in the world could see themselves in: those on the far-reaching of poverty or by, conflict and despair who found in him an ally; the junior UN staffers following in his footsteps; the young person to whom he said until his dying breath ‘always remember, you are never too young to lead – and we are never too old to learn.

“Like few in our time, Kofi Annan would bring people together, put them at ease, and unite them towards a common goal for our common humanity.

“There is an old joke: The art of diplomacy is to say nothing … especially when you are speaking! Kofi Annan could say everything, sometimes without uttering a word.

“It came from the dignity and the moral conviction and the humanity that was so deep in him.

“He had that gentle voice, that lilt that made people smile and think of music. But his words were tough and wise.

“And sometimes the graver a situation, the lower that voice would get. We would lean in to listen. And the world would lean in. And we were rewarded by his wisdom,” Guterres said.

The UN chief said Kofi Annan was courageous, speaking truth to power while subjecting himself to intense self-scrutiny.

Pointing to his time at the helm of the UN, Mr. Guterres said Mr. Annan had an almost mystical sense of the role of the UN as a force for good in a world of ills.

“He pioneered new ideas and initiatives, including the Millennium Development Goals and the landmark reforms in his report, In Larger Freedom.

“He opened the doors of the UN, bringing the Organization close to the world’s people and engaging new partners in protecting the environment, defending human rights and combating HIV and AIDS and other killer diseases.

“Kofi Annan was the UN and the United Nation was him,” he said.

Mr. Guterres said now that he occupied the office, Annan, once held, he is continually inspired by his integrity, dynamism and dedication.

“To him, indifference was the world’s worst poison. Even after finishing his term as Secretary-General, he never stopped battling on the front-lines of diplomacy.

“He helped to case post-election tensions in Kenya, gave his all to find a political solution to the brutal war in Syria and set out a path for ensuring justice and rights for the Rohingya people of Myanmar.

“Kofi straddled many worlds. North and South, East and West. But he found his surest anchor in his African roots and identity.

“The great Nelson Mandela, accustomed to being called Madiba, had his own nickname for Kofi, and called him ‘my leader’. This was no jest. Kofi was our leader, too,” Mr. Guterres stressed.

The UN chief said Mr. Annan is gone now and he would be missed immensely but that his words and wise counsel remain.

“‘Please carry on’, I hear him saying. ‘You know what to do: Take care of each other. Take care of our planet. Recognise the humanity in all people.

“‘And support the United Nations – the place where we can all come together to solve problems and build a better future for all”‘.

Mr Guterres concluded: “As we face the headwinds of our troubled and turbulent times, let us always be inspired by the legacy of Kofi Annan – and guided by the knowledge that he will continue speaking to us, urging us on towards the goals to which he dedicated his life and truly moved our world.”

Born in Kumasi, Ghana, on April 8, 1938, Mr. Annan was the seventh Secretary-General of the UN, after Egyptian diplomat, Boutrous Boutrous-Ghali exit in December 1996, and served as for two consecutive five-year terms, from January 1997 to December 2006.

READ ALSO: A CONSENSUS CANDIDATE WILL HAVE MY SUPPORT – KWANKWASO