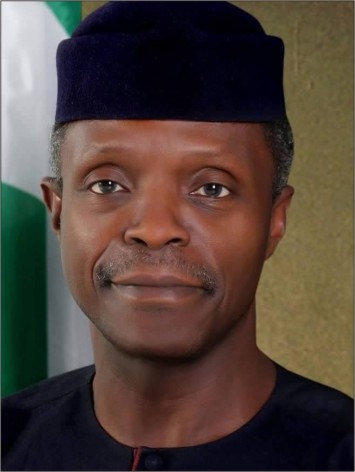 •Gets Support From The North

From the way things are right now it is almost certain that the fight for the APC presidential ticket is going to be a straight one between Vice President, Professor Yemi Osinbajo and his erstwhile boss and mentor, Asiwaju Bola Ahmed Tinubu. This is because over the last few weeks VP Osinbajo has been galvanising support from the core North for his presidential project. City People can confidently reveal that VP Osinbajo will be running for the 2023 presidential election. Asiwaju Bola Tinubu also will be running. Although both of them have not said a word about it, their body language says it all. Both have been travelling around the country, consulting with stakeholders. Their ambition has town torn them apart.

Though the two once upon a time allies have been making very deliberate efforts to downplay the cold war going on between them, it’s becoming more and more visible for all to see that the 2023 presidential race is tearing the two gentlemen apart. Yes, neither has officially declared his intention to vie for presidency come 2023, but it’s become increasingly clear from their actions and inactions that they both want to become the next president of the federal republic of Nigeria when President Buhari leaves Aso Rock in 2023. And they both seem prepared to put everything on the line, including their valued friendship, to bring their aspirations to fruition.

Asiwaju and Vice President Osinbajo have both come a long way together. Osinbajo was Lagos State Attorney General and Commissioner for Justice when Asiwaju was Governor of Lagos state almost 20 years ago. They both had tremendous respect and affection for each other. They still do. But the lure and intrigues of politics have thrown spanners into the works of their good old relationship.

News started filtering in months ago that Bola Ahmed Tinubu, whose undeclared presidential ambition has been simmering in the political space even before 2019, is reportedly facing a robust challenge from power blocs within the Presidency who is believed to be working against his long-nursed ambition to occupy Aso Rock and would rather back his erstwhile political beneficiary – Vice President Yemi Osinbajo. Many had thought this was probably nothing but unfounded speculation until the vice presidents campaign posters started flooding the major streets of Abuja and environs. Some groups have also come forward to claim they are working for the vice president. Their mandate is strictly to work towards helping the Vice President realize his presidential ambition. And from this point, the fireworks between both camps have begun.

Asiwaju has gone about his consultations vigorously and decisively. He has been everywhere, particularly up north, where he has been meeting with some of the northern biggest political powerhouses. He has had long closed-door sessions with them and despite his rumoured poor health, the Jagaban Borgu is not looking like slowing down yet on his travels and consultations. For someone who is yet to officially declare his intention to run, his pace and intensity have astounded many. Asiwaju is like a man on a mission and he is not even prepared to conceal the fact. For many, the race for the 2023 presidency may not begin until a few months before the elections. But Asiwaju sees things differently. For him, the race starts now. And he is reaping the results. More and more influential personalities and groups from the north have all indicated their desire to support the APC national leader all the way. Northern support is looking for Asiwaju if and when he declares his intention.

But the Jagaban Borgu is not the only one ramping up support in the north. The Vice President’s political machinery has been quietly working too. The various groups drumming up support for Osinbajo have been making the rounds as well, talking to personalities who matter in the north and getting them to endorse the vice president. Clearly, it will not be out of place to say the vice is also gaining ground in the north and amassing support from some of the most influential northern personalities that matter. One of them is former military head of state, Ibrahim Babangida.

IBB endorsed the candidature of Vice President Yemi Osibanjo in the 2023 presidential elections, saying he is a good man to lead Nigeria. He stated this when the Osibanjo Grassroot Organization visited him in his Uphill residence in Minna.

“I know the Vice President very well. He is a good man. A man who has conviction about Nigeria; a man who can communicate with the country and inspire people. Such a man is a worthy person to work with. We need good men to lead Nigeria.”

He described Osibanjo as a man who has a passion for the country, adding, “Nigeria is a good country too; the people of Nigeria are good. You must learn to understand people and communicate with them. And the constant discussion is key.

“I want to convey my best wishes to the Vice-President through you. And I want you to tell him to stay on the cause. I know it’s not easy but he has the conviction. I wish him the best,” Babangida noted. The elder statesman further revealed that he decided to speak to them because of the Vice-President, insisting that he knew Osibanjo has what it takes to be a good leader.

Knowing how influential the former president is not just within his immediate domain in Niger State but within the northern part of the country as a whole, this is certainly a good endorsement for Osinbajo. The former military head of state is not the influential northern personality that is putting in a good word for the vice president. The Emir of Daura, Alhaji Faruk Umar, has commended Vice President Yemi Osinbajo for his loyalty and commitment to the administration of President Muhammadu Buhari.  Osinbajo was in Daura for the turbanning ceremony of Buhari’s nephew, Alhaji Musa Haro. Haro was bestowed with one of the Daura emirate’s highest traditional titles, Danmadamin Daura, by the emir.

It is a known fact that Emirs don’t speak in public all the time. They do not speak in public and take positions on issues unless it is absolutely necessary for them to do so. The Emir of Daura understands clearly the political import of his open admiration for the Vice President. He knows he has openly endorsed Osinbajo for President come 2023 and has subtly urged his kinsmen to do the same.

Umar described Osibanjo as the most trustworthy Vice President of Nigeria who has the best interest of Nigeria on his mind. Speaking of the Vice President, the Emir of Daura said: ”We extend our appreciation to his excellency, the representative of the President. He-the VP- is a nobleman who keeps his promises and a trustworthy person who has so much patience and knows what to do at any given time.” He added that the vice president who ”is sitting next to me is a very good man. He is my favourite person but I always forget how to pronounce his name properly. He is a very nice person.”

It is a known fact that Emirs don’t speak in public all the time. They do not speak in public and take positions on issues unless it is absolutely necessary for them to do so. The Emir of Daura understands clearly the political import of his open admiration for the vice president. He knows he has openly endorsed Osinbajo for President come 2023 and has subtly urged his kinsmen to do the same.

Even the Arewa Community in Oyo State has also joined the groups of northern origin clamouring for the vice president to run for the exalted office. The Hausa Community members, led by Alhaji Yahaya Alli, had stormed the venue of the programme, with a large digital banner, and local Hausa entertainers, loudly supported Osinbajo to succeed President Muhammadu Buhari in 2023.

“I am here on behalf of Arewa Community in Oyo State, being their leader. His Excellency, Vice President of Nigeria, Prof Yemi Osinbajo, is a man of honour. He is a man of integrity. And he is a man that can be reckoned with.”

“He is a trustworthy man and he is a man that we can hand over the affairs of our country into his hands. We have seen what he has done for the past seven and half years. He can do it.”

“If you look at what happened between him and his principal, who is President Muhammadu Buhari, there is a kind of trust between them like two twin brothers, to the extent that whenever Baba Buhari is going outside the country for a long time, he always hands over the power of the country to him before he goes and comes back. So, I believe that Prof Osinbajo is the kind of person that we can easily trust and that we can easily hand over power to, come 2023 by God’s grace. I know God will take over. On behalf of Hausa Community in Oyo State, and on behalf of Sarkin Sabo of Ibadanland, we are together with Prof Osinbajo,” he assured.

From the look of things, it is obvious that though it may appear that the VP Osinbajo may not be looking desperate to become the next President of Nigeria, his team is certainly working underground for him. And from the look of things, they are not just working hard, they are breaking new grounds as well and making huge progress. The VP is slowly and steadily gathering support from the north. He knows the north is key. Anyone who is serious about becoming Nigeria’s president knows they must garner massive support from the north to win the elections otherwise that desire to become president will remain nothing but a mirage.

It remains to be seen how things will pan out between the vice president and his erstwhile mentor and leader, Asiwaju Bola Ahmed Tinubu. Will Asiwaju step down for Osinbajo a second time or will Osinbajo go on to square up against the man who single-handedly gave him to president Buhari as his running mate and eventual vice president? 2023 is just around the corner, time will soon begin to provide for our answers to these salient questions.

FOR CHANTE CAMPELL, NOW IS THE TIME...