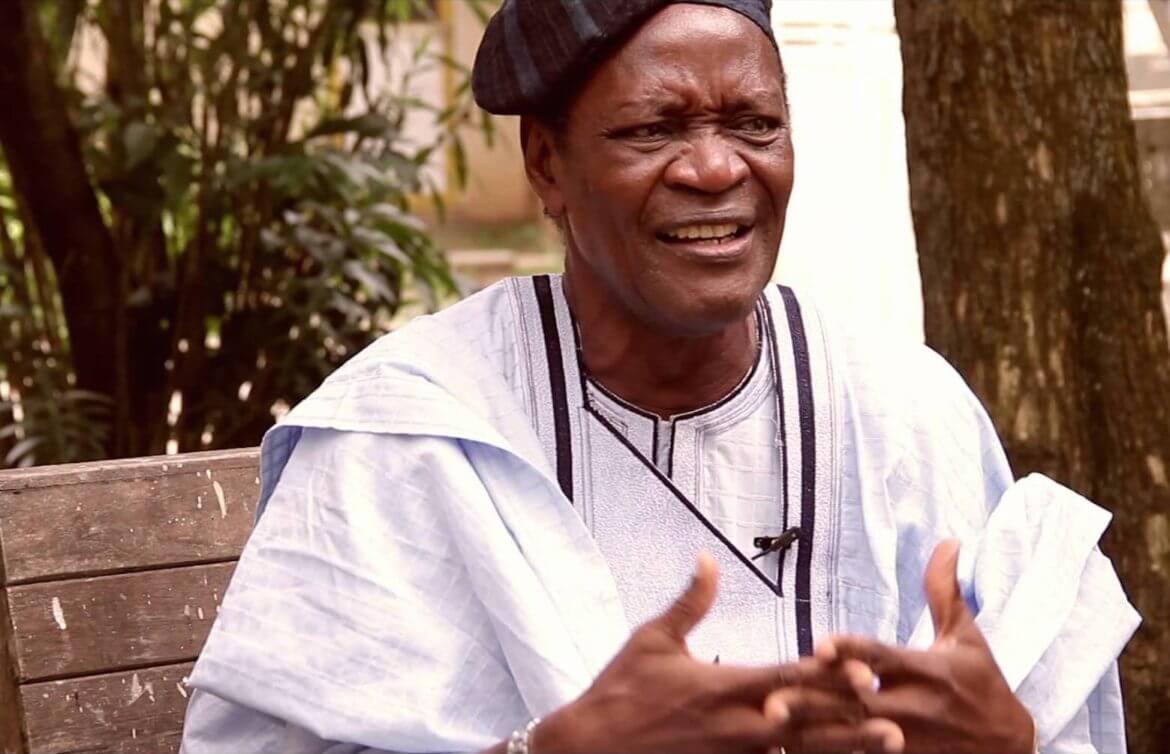 Veteran Actor, Singer & Performer, Jimi Solanke, is 75. But he does not look it. He is still as slim and fit as ever. For decades, his name has been in the mouth of many people. Everyone simply calls him, Jimi Solanke, just like that. No prefix. No Mr., No Chief. It was only in his later years that the younger generation started adding Uncle to his name. Now, they call him Baba Agba.  In the good old days, his name was everywhere. The popularity was on account of his brilliant acting, singing, music composition prowess , dancing and choreography to mention but a few.

Those were the days when the theatre industry had passionate actors, who were in it purely for the joy they derived from being actively involved in acting. Money was secondary. He did not only act, he also taught several generations how to act, sing and dance well.

Though, he turned 75 this year, Jimi Solanke has not slowed down one bit. His sonorous voice, which he describes as a gift from God, is still intact. He is still physically fit. He is still agile. He is still slim. His power of recall is still acute. Over the years, Uncle Jimi, as some call him, has remained the quintessential Theatre man, who though got paid mere pittance, was ready to be part of as many production as possible. As far as he is concerned, money or no money, the show must go on. And so he was part of many productions, back to back. He was very appreciative  of the applause he usually got each time he got on stage to act. He is a brilliant actor no doubt. It comes to him like 2nd nature.

At 75, he is still actively involved in the world of Theatre. Right now, he is about opening a training school in Ipara, his hometown, in Ogun State. He plans to train professional actors, singers, dancers there, once it takes off.

A few weeks back, he came to City People to pick up his award at the recent City People/Evergreen Records award event for his contributions to theatre over the last 50 years. And he took his time to talk to the Publisher, SEYE KEHINDE, about his life and career.

You’ve been involved in the creative arts for decades, What has kept you going?

Passion. I am passionate about performing arts. I spent most of my youth time in the performing arts. Even then, when I didn’t know where I was headed, when I was ostracised, when the only person, who kept urging me on was my mother. My father didn’t want to see me. And he used to say ‘anyone I see with him would as well be punished’ I ran away from Lagos, moved into Ibadan, where I had another opportunity of studying Theatre Arts. So, that added to my musical talents. So, I just threw myself into it. I went through a lot to get to where I am now. And when you think of what you went through to get to where you are now, there is no need to relent.

All you need do is make sure you brush up your performing arts skills. You purpose for tomorrow.

My first family was not successful because my in laws didn’t see any future in a performing act person. When you have a young lady who the parents might not like you to marry, they would be putting pressure on the lady to opt out, forget him! When you have gone through such experiences and at the end of the day you are still at it, then you become that Alagbede Ti o n lu Irin ni oju kan.

I thank God, till tomorrow, I am still ready to go. I am setting up a Centre for Creative and Performing Arts Enhancement in my hometown, Ipara Remo. I came from my hometown in Ipara for this event. I am going back there. It is not far from Lagos anymore. That is what I am working on now. I am so passionate about it. I am a believer.

You are an all-round entertainer. Which one did you start with? Which came 1st?

I started with Music, trained in a church choir, Holy Trinity Church, Ebute Ero and then in my Secondary School, we had a small school band. That was where I wrote majority of the songs that Roy Chicago recorded.

I was in school when I wrote all the Onile Gogoro, Ore Titan, Jenri Okan. And Abalabi Niteclub at Olorunsogun was just a stone throw from Silver Street, where my father had a house then and we were living there at that time.

That was where Roy Chicago’s band used to play and anytime he was rehearsing, I would just strolled and walked in to see Brother Olu, Bassey Okon, or Uncle Willie or Tunde Osifisan, who eventually married my younger sister. It was when I got to Ibadan that I had the opportunity of going to the 1st School of Drama in Africa, which was run by the Institute of African Studies, that became the Dept of Theatre Arts University of Ibadan. We were the first set of people. There I was able to gain experiences in Theatre and drama, acting, dance, I had music in me. Beyond that, I had the opportunity of studying with some great artistic people, who taught set building, directing, Choreography. It was a Pot Pourri, which we were fed with at that time.

All I was aiming at then was just to be a performing artiste. I was lapping it all up, hook, line and sinker, I was ready. That is why I refused to join the Academic aspect of the course when the school of drama metamorphosed into the dept of Theatre Arts I preferred to keep my professional strength going that was when people like Micheal Crowther, who left African Studies, Ibadan to set up the African Studies in Ife when they needed somebody at Ori Olokun as a performing artiste, music, dance drama, they came back to Ibadan and lured me from Dept of Theatre Arts to the Institute of African Studies, University of Ife.

They had an out performing theatre in Ori Olokun, outside of the City/Town and Gown. When they employed me, I was Assistant to Akin Eniba (Music), Assistant to Peddie Haper (Dance) and Assistant to Olorotimi (Drama). That was why I got going fully.

You’ve been doing this for how long now?

(Laughs) Over 50 years. From the moment I left secondary school, I told my daddy I want to start singing and acting. That was what pained him. He wanted me to be an Engineer of some sorts. He arranged some good apprenticeship for me at the Caxton Press, Eleyele in Ibadan. Eventually, I left the job, because I knew in my mind that all I came to this world to do is to be a performing artiste. Maybe once you have made up your mind what you want to do, even against all olds, you are still telling yourself this is what I want to do. My mum used to say this proverb that what a child likes to eat does not cause him or her discomfort or kills. I was strong willed to be able to hold forth against the complaint of my father and family in general. But right now, I thank God, I am the only one they are looking up to now.

Were there people you looked up to at that early age that made you insist you wanted to be a performing artist?

I loved to listen to standard Jazz tunes. Since when I was young. Even as I sit here now I know over 50 off hand. Each time I had the opportunity of going to places where they play Jazz tunes then, I would pick the microphone and sing. Something kept telling me go on, there is a future for you, don’t mind anybody. Very soon enough when I started with the drama school, I started travelling to London, Paris for festivals, World Theatre Day festival, we would go to America to do plays. That was how I was getting more and more confidante, and then I came to the belief that no way, this is what I am going to do. And it is part of me till today. If I don’t have food to eat in one day, I will not be hurt or hungry. I am never hungry. That is when I will pick up my script, concentrate on it, memorise it and will be ready to go on stage and take a thankful of  applause for money that you cannot take to the bank.

I Have Been Acting & Singing For Over 50 Years was last modified: January 1st, 2018 by Seye Kehinde

Why I Adopted Over 22 Children To Bring Up – Bisket Boss