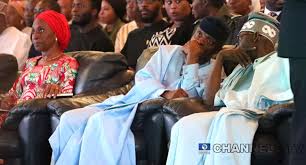 The Vice-President, Prof. Yemi Osinbajo, who represented President Muhammadu Buhari, failed to acknowledge the presence of some APC govenors while giving his speech at the 11th Colloquium of Asiwaju Bola Ahmed Tinubu

The vice President called out the names of all the governors present, as protocol demands.

The presence of the Inspector-General of Police, Mohammed Adamu; service chiefs and several monarchs were also acknowledged.

However, Governor Rochas Okorocha of Imo State, who has been suspended by the APC, was not acknowledged by the Vice-President despite being present. Ditto for Governor Abdullahi Ganduje of Kano State

SAUBANA ADENIYI’s Family Reveal What They Will...