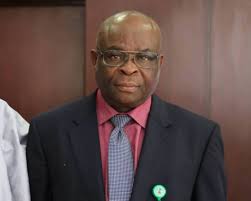 Its still like a never ending saga between the former CJN Onnoghen and the federal goverment, becauses there fresh indication of his office been sealed off and the administrative staffs been ejected.

According to a report by Punch, the move appears to stop any possibility of Onnoghen accessing the office as policemen were said to have sealed the office and ejected all administrative staff in the axis of the CJN office as early as 7am on Monday.

A source said, “the police have sealed the office of the CJN. Officers and men of the Force went to the administrative staff offices at about 7am and ordered clerical and other staff who were already at their desks to leave after which they locked up everywhere.”

Rhe National Judicial Council has fixed Tuesday for an emergency meeting to deliberate on the sudden suspension of Onnoghen and swearing in of Justice Tanko Muhammad as the Acting CJN by President Buhari.