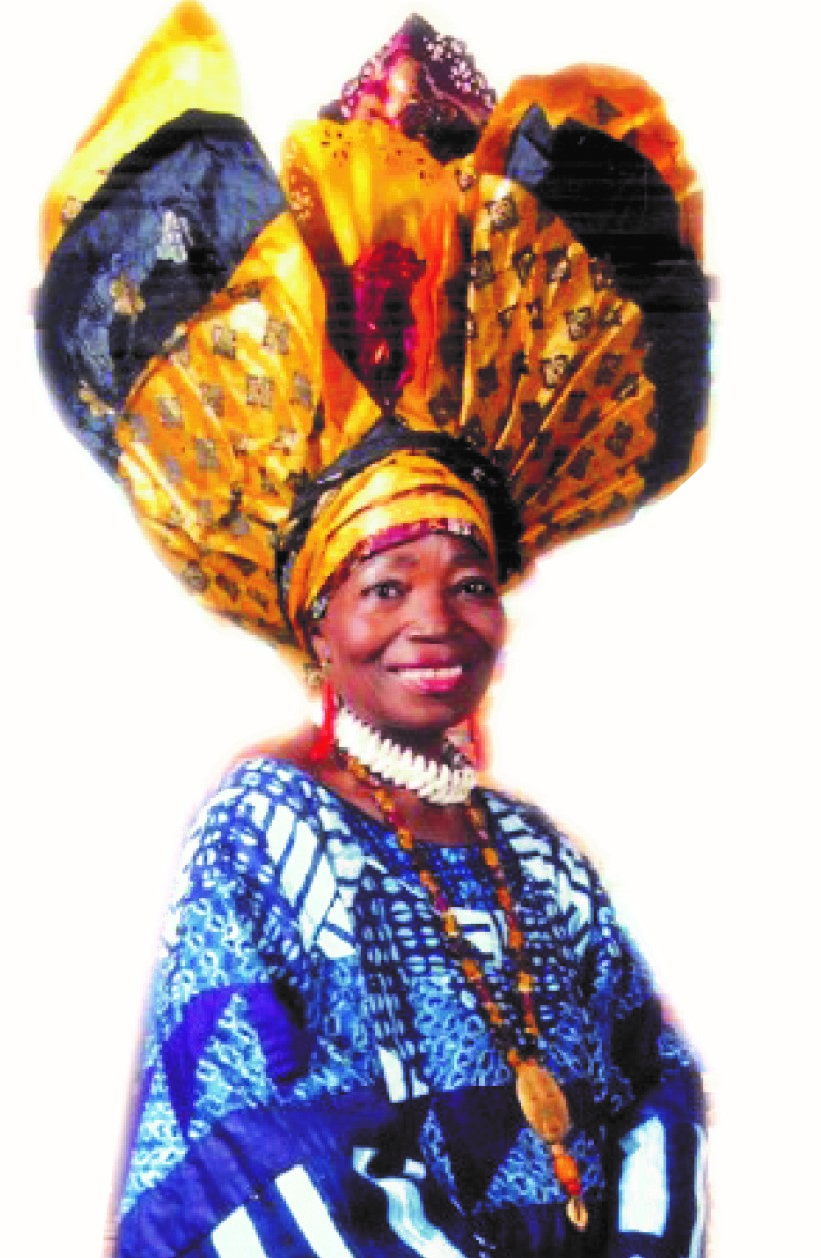 As you read this, Chief Mrs Nike Okundaye is in a happy mood. At 68, she feels accomplished. She is a Arts icon. And right now she’s celebrating 50 years of exhibiting and promoting traditional and contemporary African art. She celebrated that last Sunday, 27th 2019 at her Nike Art Gallery located at 2 Nike Art Gallery Road, 3rd roundabout off Lekki, Epe Expressway, Ikate, Lagos.

Lets quickly tell you that Nike Art Gallery Lagos, was opened in 2009 by her to further promote, enhance, sustain and provide enabling environment for the growth of African cultural heritage in Nigeria. Its a 5 floor ultra-modern cultural Art centre at Lekki Peninsula, Lagos with the main purpose of positively transforming the landscape of the hitherto neglected Art and Culture in Nigeria. This impressive white building was opened to the public in September 2009. The building also holds Nike’s second Textile Museum. It also houses the 4th Nike Art Gallery in Nigeria with a large stock of Nigerian and African art of different media. In her keynote speech during the opening ceremony, Nike did tell the world, “1 dedicate this building to the glory of God and to the Nigerian cultural heritage”. Since the opening of this building, the “Nike Cultural Art Centre” has become a cultural hub and a popular tourists’ destination in Lagos Nigeria.

Who is Chief (Mrs.) Nike Monica Okundaye popularly known and called “MAMA NIKE” by her numerous fans? We can tell you. She was born on the 23rd May 1951 at a very quiet and hilly village of Ogidi-Ijumu in Kogi State of Nigeria. Nike is a multi talented individual with a wide range of enduring fortitude. In her early life as a village girl, she was a stage dancer and later became an actress featuring as a lead actress in a local Yoruba film, “Ayaba”. In addition, she has also participated in many documentary films including “KINDRED SPIRITS” sponsored and produced by Smithsonian Museum in Washington DC and a CNN feature documentary film “AFRICAN VOICES”. In January 2016, the CNN again featured Nike in another documentary film “INSIDE AFRICA”. Nike then walked up the ladder to become a rare international icon in art. She is an accomplished professional artist; a painter, a textile artist, weaver, embroider and an awards winner at many national and international art shows. Nike is a member of many national and international professional bodies. She is also principally a social entrepreneur and a well known philanthropist championing the cause of the neglected Nigerian rural women using art as a tool to accomplish these noble missions. Nike is happily married with children.

Nike is the Managing Director of Nike Centre for Art and Culture, Osogbo where she offers free trainings to all Nigerians in various forms of arts. The centre was established in 1983 by Nike solely from her earnings as an artist and without government assistance. Nike opened this centre with 20 young girls who were marching the streets in Osogbo aimlessly and who had no hopes for the future. In their tender age, Nike withdrew these girls from the streets and provided them with free food, free materials and free accommodation at her residence at Osogbo and taught them how to use their hands to earn decent livings through the art. So far, over 3000 young Nigerians (mainly violated and abused young women) have been trained in the centre and who are now earning their decent livings through art. Many African countries now send their students to study textile art at the centre.

The Nike Centre for Art and Culture, Osogbo now admits undergraduate students from many universities in Nigeria for their industrial training programs in textile design. Over the years, this centre now admits students from European countries, Canada and the United States of America. International scholars and other researchers in traditional African art and culture also visit the centre from time to time for their research works into Yoruba “Adire” fabric processing and African traditional dyeing methods.

Nike is also the Owner/Curator of the Nike Art Galleries at Lagos, Osogbo, Ogidi-Ijumu and Abuja. In 1996, Nike established a textile (Aso-Oke) weaving centre at Ogidi-Ijumu near Kabba in Kogi State for the women of the village, employing and empowering more than 200 rural women in the weaving centre. In June 2002, Nike established an Art and Culture research centre at Piwoyi village, FCT Abuja with an art gallery and a textile museum, the first of its kind in Nigeria which will provide functional platform for research into Nigerian traditional textile industry in the Federal Capital Territory area of Abuja. In furtherance of these noble endeavours, Nike is currently the managing director and founder of the following organisations in Nigeria; “Nike Art Productions Limited” which she incorporated in 1994, “Nike Art Gallery Limited” which she incorporated in 2007 and the “Nike Research Centre for Art and Culture Limited” which she incorporated in 2007.

Also in 2007, Nike founded the “Nike Art and Culture Foundation” with some notable eminent Nigerians as trustees, with the main aims and objectives of fostering Nigerian cultural heritage. Nike has earned for herself numerous laurels for her hard work, devotion and dedication towards the promotion of art and culture in Nigeria. Just to mention a few of her recent time awards and public recognition of her noble efforts in developing the society and mankind, in May 2006, Nike was awarded “Ordine Della Stella Della Solidarieta Italiana” one of the highest Italian national awards of merit by the government of the Republic of Italy in appreciation of her efforts in using art to address and solve the problems of Nigerian prostitutes (sex workers) in Italy.

Nike was principally educated in art by her great grandmother whom Nike lived with after the death of her mother and grandmother. Her great grandmother was a weaver and an “Adire” textile maker/dyer during her lifetime. It is therefore, interesting to observe that Nike had no serious formal western education because of lack of fund. Her parents were quite poor and they could not fund her education. The truth is that, Nike lost her mother at the age of 6 and her grandmother at the age of 7. Her father, late Nicolas Ojo Allah who was a village traditional drummer and baskets weaver in his days could not help her much to acquire higher western education.

Nike stopped schooling at primary 6 school level at her village at Ogidi-Ijumu in Kogi State of Nigeria. However, Nike went ahead to teach herself English at home. She never went to school to study art which had brought her to global spotlight. Vocational training in art was passed down to her by her great grandmother, late Madam Ibitola who was an “Adire” textile maker and a dyer of fabric during her days in the village of Ogidi-Ijumu, Nike’s birth place. Watching her great grandmother in the art of “Adire” textile processing and helping her out in “Adire” making, Nike walked up the line to become an expert in “Adire” textile making, dyeing, weaving, painting and embroidery. This was the way vocational training was passed down from parents to children in Yoruba communities in those days in Nigeria.

Nike steadily built upon what her great grandmother taught her and went ahead to develop her own unique style and technique in textile design and painting, and how to effectively present them for exhibitions. Nike is a multi talented person who was able to use her natural given ability to assist and help many less privileged. In that quest, she has been able to give hopes to the hopeless in our society. In the same vein, Nike has been able to economically and socially empower many rural women by setting up cottage weaving workshops/centres for women at Abuja, Osogbo and Ogidi-Ijumu thereby giving voices to them in their various communities.  Nike’s challenges were many especially when her activities are centred at men dominated societies. The men saw her initiatives and activities to be too out in giving the so called liberties to women who were hitherto oppressed in the rural areas.

In her humble quest to further promote, enhance, sustain and provide enabling environment for the growth of African cultural heritage in Nigeria, Nike single handedly went ahead in 2009 and built a 5 floor ultra modern cultural art centre at Lekki Peninsula, Lagos with the main purpose of positively transforming the landscape of the hitherto neglected art and culture in Nigeria. This building was opened to public in September 2009.

From a very modest beginning without serious formal western education, Nike’s actions and initiatives have positively impacted the lives of so many who came her ways. Other than giving the benefits of her exposure to the less privileged, Nike’s works have meant and become close to a large array of dedicated fan across the globe where she has become an ambassador of good will for art and culture for her beloved country since 1974 when she first took her art works across the shores of this country to the Americas for exhibition. She has had 38 groups and over 116 solo exhibitions of her works in her professional artistic life. Nevertheless, her works can be found in many public and private holdings all over the world including; schools, colleges, universities, palaces and museums. In fact, many academic papers and articles have been written and produced on her art works by scholars across the globe. Her interactions cut across divide; politicians and non politicians, diplomats, scholars, business men and women, researchers, children, tourists, etc come on daily bases visiting Nike and her centres in Nigeria.

How I Started My Adire Business 50 Yrs Ago was last modified: January 28th, 2019 by Reporter