Watch moment when police shoot man while trying ‘to rape’ 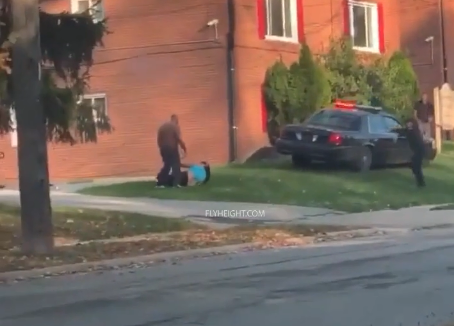 The distressing video has shown the moment police shot a man while he was trying to ‘rape a woman’ in broad daylight.

Police in East Cleveland shot and killed the suspect while he was attempting to rape his would-be victim right in front of them.

According to MTO, officers were called to the scene to investigate a “rape in progress” inside of a public housing project in East Cleveland. When police arrived, they located the alleged rapist who was armed with a gun dragging the woman’s hair in public.

In the video, Police can be heard telling the man to drop the gun, but he refused. Officers then fired multiple shots at the suspect, killing him on the scene.

The woman who was believed to have gotten injured during the incident was rushed to the hospital for treatment.

Just In: Maina Appears In Court On Wheelchair