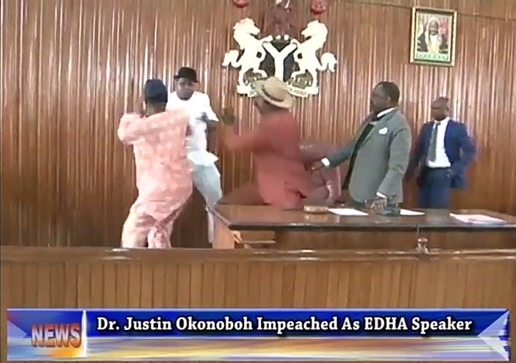 Members of the Edo State House of Assembly on Monday were engaged in physical combat in a bid to enforce the suspension of four of their colleagues as well as forcefully removing the speaker from his seat and install another speaker.
It was gathered that trouble had begun when the court bailiff showed up to serve a contempt order from the court on the suspended lawmakers, which did not go down well with them. They described the order as an abuse of court process. Shortly after the incidence, the speaker, Justin Okonoboh, was reportedly impeached, and a viral video was released online showing how the lawmakers of the state were engaging in a free for all fight.
READ ALSO: Speaker of Edo State House of Assembly Impeached
The lawmakers who forcefully removed the Speaker of the House, Dr. Justin Okonoboh, from his seat following an alleged impeachment notice signed by 16, out of the 24-member assembly, beat each other up inside the chamber as a result of the impeachment.
Here is the video below;
Watch the Shameful Moment Edo State Lawmakers Fight Each as the Speaker was Forcefully Impeached (Video) was last modified: August 15th, 2017 by Arinze Ago