Home Sports “We can feel the possibility of winning this title” – Arsenal Boss, Unai Emery On Europa League
Sports 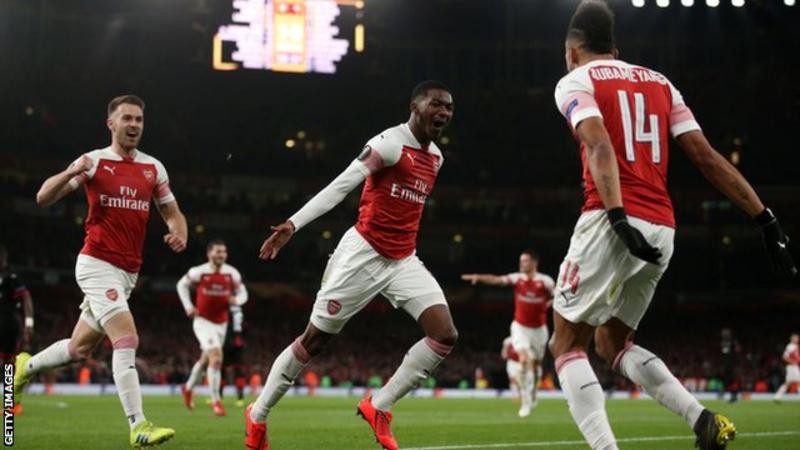 Arsenal manager Unai Emery says he is “excited” by the prospect of winning his first trophy with the club following their 4-3 aggregate victory over Rennes to reach the quarter-finals of the Europa League.

Arsenal were knocked out in the semi-finals of the Europa League last season under Arsene Wenger.

“We can feel the possibility of winning this title,” said Emery.

Pierre-Emerick Aubameyang inspired a Gunners comeback as they overturned a two-goal deficit from the first leg to reach the quarter-finals.

The striker put the Gunners ahead within four minutes, firing in Aaron Ramsey’s cut-back, before setting up Ainsley Maitland-Niles at Emirates Stadium.

He then poked in Sead Kolasinac’s low cross after the break to make it 3-0 as Arsenal joined Chelsea in the last eight following their 8-0 aggregate thrashing of Dynamo Kiev.

Both English clubs are favourites to win the competition after five-time champions Sevilla’s shock exit in the last 16 and Italian giants Inter Milan failed to progress.

Emery sees success in the Europa League as an extra ticket into the Champions League as Arsenal – who are currently fourth in the Premier League – battle to remain above Manchester United and Chelsea in the table.

“The last eight teams are very important teams and it is going to be very difficult,” said Emery. “The Europa League is giving us a big opportunity also to make one way to the Champions League.

“And also, it’s one title. I said to the players, I am excited about this competition. It’s not just because you can get to the Champions League.”

The draw for the quarter-finals takes place on Friday at 12:00 GMT.

“We can feel the possibility of winning this title” – Arsenal Boss, Unai Emery On Europa League was last modified: March 15th, 2019 by Damilare Salami