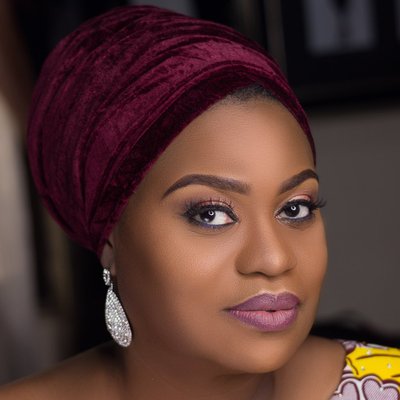 She got all of these from her late dad, Dr Tunji Braithwaite who was in his lifetime a radical Lagos Lawyer who founded The Nigeria Advance Party (NAP).

Laolu Branco-Rhodes is one of the beautiful daughters of this late Lagos Lawyer, who died a few years back. She is a Lawyer, like her father. And consciously or unconsciously, she has stepped into her father’s shoes in politics. In his lifetime, he combined Law and Politics. He formed the Nigeria Advance Party (NAP) on 13th October 1978 and currently the party is celebrating its 40th anniversary. Laolu, who is married to Kitoye Branco-Rhodes, a Lagos politician and businessman is the interim National Chairman of the party which is contesting INEC’s decision to deregister NAP in 2015 and up till now the deregistration order has not been lifted and NAP members are contesting this. Laolu was elected in January 2018 through a democratic process by NAP members.

In this interview with City People Publisher, SEYE KEHINDE, she says by insisting on deregistering her party, INEC, the Nigerian electoral body is killing democracy in Nigeria. INEC’s action will not stop us from celebrating 40 years of NAP. We are very active in 31 states of the federation including the FCT. We have a lot of active members in the North. It is a party of the youth. In the North, the party chairman is all between 22-29.” Below are excerpts of the interview.

What is going on in NAP? And what’s all this talk about deregistration of NAP?

But unfortunately, and sadly for our nation’s democracy, in December of 2012, INEC deregistered a number of parties, including NAP. The National Conscience Party was one of the affected parties. It went to court. In that case, the court of Appeal held that the purported deregistration by INEC of those political parties was unconstitutional, illegal, mill and void and of no effect. The Court of Appeal also placed a perpetual injunction on INEC from deregistration or disbanding of any political party, including all the political parties that had been deregistered. The effect of that judgment of the court was to put the deregistered parties (by that I mean the parties that were purportedly deregistered by INEC ) back to the pre-deregistration status.

What did INEC do instead? It only reversed the deregistration of the National Conscience Party and told other parties who were in the same condition to go back to court. And some parties went to court and obtained a similar order. And it was only those one INEC restored their registration. Now, this is in gross violation of the law, because any judgment of the court becomes the Law. So, INEC has been in contempt of court in this regard, in refusing to obey the judgment of the court. INEC does not have the right to decide whose registration to restore once a Court has delivered its judgment and ruled.

We in NAP think this is another example of impurity, in a core institution of the state, namely the electoral body.

Did your dad do anything about it before he died?

Yes. Before my father’s transition, he wrote to Prof. Mahmmod Yakubu, the head of INEC. In his letter, he attached the court judgment in the case of NCP VS The National Assemblies and others.

But up till date, INEC chose to ignore the judgment as it relates to our party.

What we did was, when we saw that INEC’s recalcitrance was obvious because we saw them as an anti-democratic institution, we decided to go to court. This is also because of many of our teaming supporters and members nationwide wanted to express their political aspiration on our platform, in December of 2016 we headed to court. We sued INEC. And in that case, in the first few appearances, INEC lawyers will show up and they would not have their case files. They will leave their case files behind. Eventually, they raised the preliminary objection and this is a way to frustrate a case. And so within 12 months of the institution of that case, the court struck out our case. So still undeterred and still determined to participate in the democracy and is the election by virtue of all that had happened, we then decided to apply to INEC as a fresh political party notwithstanding that NAP is 40 years old. Even in that process, our chance was Foreclosed, according to their rules. Their own rule and guidelines. They said the closing date for the submissions by political parties, was 6 months before the presidential elections. That will make it either the 16th or 18th of August. We are in 31 states of the Federation, as week as the F.C.T, Abuja. So, our Abuja chapter proceeded to make the submission on the 8th of August and our Abuja Chairman was turned back of INEC.

Somebody told him that oh we had a meeting yesterday and orders from above have instructed that we should not accept any more applications or submissions. This was after we had paid the mandatory, non-refundable N1 million naira deposits and yet we were turned back. So, at that point, we began to send a delegation to INEC and eventually they accepted our submission. But then they wrote to us saying that  we had come too late and that they were not going to even process it until after the 2019 elections, at which point another delegation, including myself, went to INEC in the hope that we would see the chairman of INEC, in the person of Professor Mahmod Yakubu but it was just about 2 weeks to the Osun elections and there was a lot of frenzied activity at the Abuja headquarters.

But we did see the former acting Chairman of INEC, Amina Bala Zakari. She was very disdainful. She was very contemptuous in her reception of us. When she knew that we were from the Nigerian Advance Party, she asked. She said Halia is it not dead. We deregistered it, meaning that we have killed it now. You mean it is still alive. That tells you a lot.

And she said No. You were not a party to that case in court. And I told her we also went to court but your lawyer raised a preliminary objection. And she said so you couldn’t win abi? I said Yes. That is what happened and now we have come as a fresh political party to register, which in itself is an aberration. She said, well, we are not doing anything until after the 2019 elections. So, we returned to Lagos. As a party, we came together to resolve what the next step should be. And the next step was the press conference we called which took place 2 weeks ago.

That’s where we are right now.