Home News What Men Want: Incase You Missed It
News 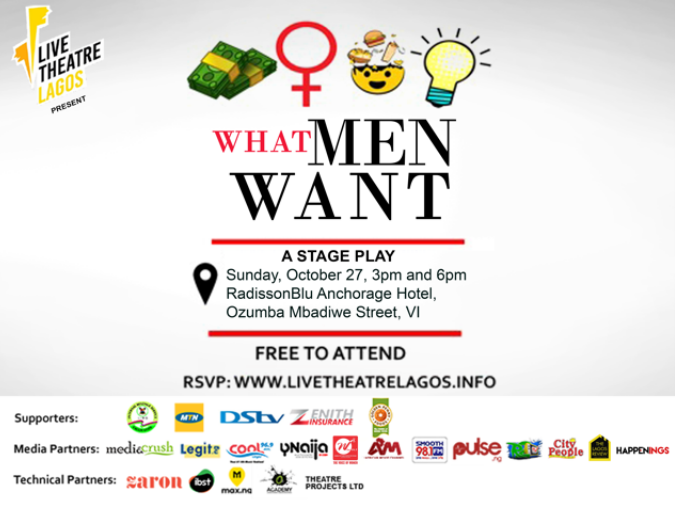 If you miss this awesome drama piece in August, here’s your chance to savour the amazement of the drama called What Men Want. What Men Want is a satirical comedy about life, love, faith, marriage and everything in between featuring Diana Agbede and MaryAnn Ivy Amakor. This play comes up on October 27, 2019 at the Radisson Blu Anchorage Hotel, Victoria Island by 3pm and 6pm.

What Men Want is directed by Ajibola Fasola, stage managed by LakeShow and produced by Adenugba Oluwanishola for Live Theatre Lagos with Make-up design by Kemisola Isijola and Costume design by Tobiloba Apelegan and Props and Set design by Ralph Ajayi and hosted by Desmond Ekunwe.

This play is FREE to attend. Kindly make seat reservations at www.livetheatrelagos.info or win your ticket on this station. Also catch the show on Livestream on October 27th by 6pm  via the Mhoori App

What Men Want: Incase You Missed It was last modified: October 22nd, 2019 by Reporter