When Lagos Beautician, Dr. Mary Charles Was Made President of Practitioners of Spa & Beauty Association of Nigeria (POSBAN). 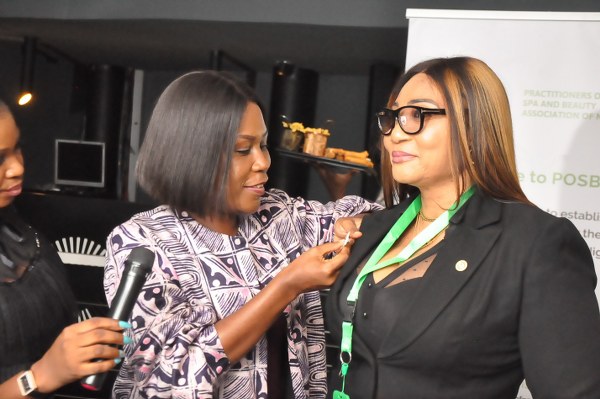 on Tuesday, 7th December 2021, all registered members and excos of POSBAN (Practitioners of Spa and Beauty Association of Nigeria) gathered at Lekki Phase 1, in Lagos to witness the induction of a new exco for the Association.
The meeting started with the arrival of members. After all, members were seated, the Vice President, Mrs. Toyin Collins took to the stage to deliver her speech.
In her speech, she acknowledged the good job done by the association so far, and the progress made by the former exco.

After this, Mrs. Daisy Obiano (the outgoing Secretary) took to the stage to anchor the meeting. During the process, Mrs. Daisy Obiano introduced all the outgoing exco members to new members. After this, she announced the presence of the Director of Public Safety and well-being, at the Lagos Commission, Mr. Adeyinka Adebiyi, and his assistant, Mrs. Abiola. After this, Mr Adeyinka Adebiyi delivered his speech on behalf of Director-General, Dare Mojola, who is the Director-General and Chief Executive Officer of the Public Safety and well-being Lagos Commission.

During his speech, he helped the association compose a slogan. He also talked about the Director’s joy to collaborate with POSBAN.
Thereafter Mrs. Robert Quadri took over to deliver a short speech before handing over the stage to popular cosmetologist, Tara Durotoye.

She decorated them with beautiful badges, after which she gave a short appraisal speech.
In her response, the new President of POSBAN Dr. Mary Charles gave a short speech. She thanked everybody for the success of the event while assuring members of the association, that her reign will ensure professionalism and safety in the profession.

When Lagos Beautician, Dr. Mary Charles Was Made President of Practitioners of Spa & Beauty Association of Nigeria (POSBAN). was last modified: December 8th, 2021 by Reporter

We are suffering, hungry, we need our November salary – Policemen

Empowering Humanity With Skills: The People And Polity Model