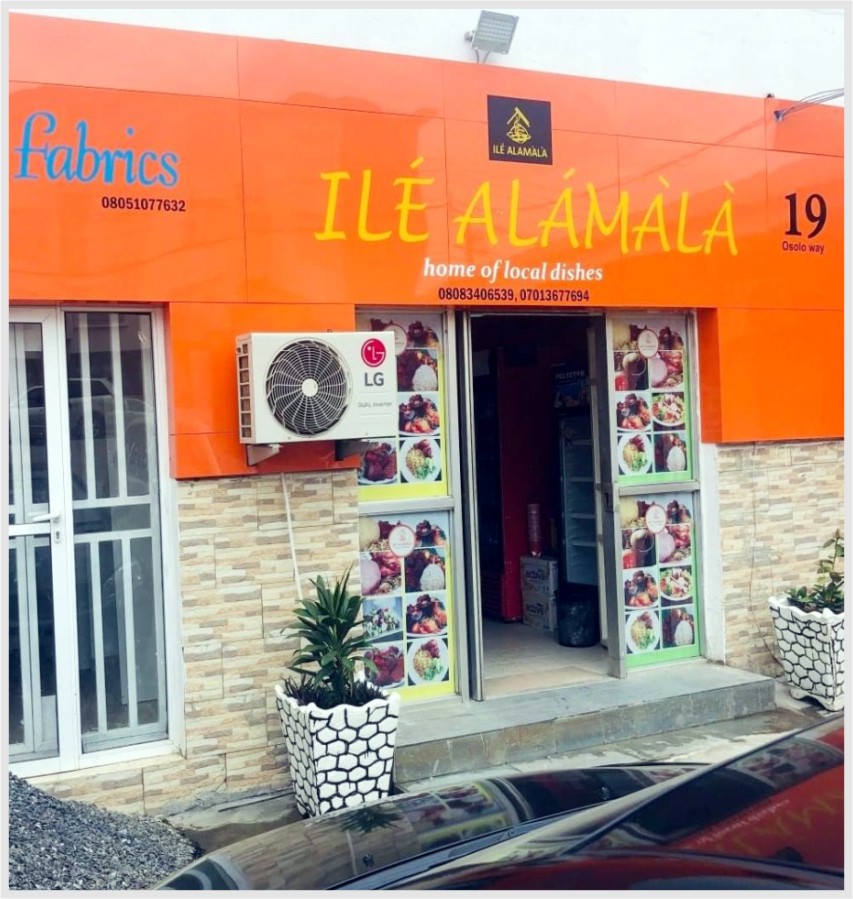 The kind of crowd that storm the restaurant to get their food is quite impressive. Right from the car park, you would begin to notice Exotic cars which show that many rich men and women are there to get some of the delicacies. Ile Alamala started 5months ago but it has become the biggest in that area, ever since it started, everybody now wants to eat Ile Alamala food. Another reason why people can’t help but visit Ile Alamala is that they sell all kinds of food, you will always get your choice of food at Ile Alamala.

Ile Alamala is barely 6months but it has managed to pull lots of traffic to the point of getting praises from Music Stars. Let us also add that Ile Alamala is a well-organized restaurant and very attractive and it is situated in a very clean environment. Did we mention that it is owned by ever-gorgeous celeb big babe, Tosin Osinowo? Some might be surprised to hear this. Ask us why? She is known to be very classy and cooperate woman.

She is one of the beautiful celeb babes that Rock both Lagos and Ibadan social scenes. She is beautiful, successful and very fashionable, which is why her Restaurant is not the regular one. It’s impossible not to like her when you meet her at any function. Her humility and simplicity are second to none.

Tosin Osinowo is one of the celebrity women whose 18 carat Gold always makes a huge impression at the party. There are times that she chooses to look simple to parties but she always steals the show despite looking simple. We can’t easily forget how she stole the show at the 2nd Edition of Female Entrepreneurs Award. Her black dress was eye-catching, although she appeared simple because she wasn’t wearing any makeup but she still dazzled all through.

Her fashion sense usually wows many at any party she attends, you can’t help but admire her natural beauty and flawless skin when you meet her at any function. She is very visible on the Lagos social scene. Her crowd is small, she is also a lover of Holt Luxury lace and 18 Carat Gold.

Tosin Osinowo is also blessed with a lovely body figure which makes all her outfit suits her well. She also combines beauty with brain, this gorgeous babe is the CEO of many businesses. She’s a very big entrepreneur that has her hand is many successful businesses. Apart from the most talked-about restaurant she runs in Lagos, she owns a big hotel in the ancient city of Ibadan.

The hotel is one of the big and luxury hotels in Ibadan. Did we also mention that she has a company that supplies Frozen foods in wholesales? She is a jack of all trades. Despite being a society woman, she also runs all her businesses effectively. She is happily married to her heartthrob and their union is blessed with lovely kids.

Did we mention that Ile Alamala was Awarded the promising Amala Vendor of the year at the 2nd edition of city people female entrepreneurs award?

This is due to their success within a short period they started business and how they have become one of the most sought after food vendors. A lot of celebrities also come all the way from Lagos Island to Ajao estate just to have a taste of the Amala and other delicacies they serve at Ile Alamala. Just as celebrities rush to Ile Alamala, Average individuals and Residents of that area also rush there. Let us also add that their customers cut across different parts of the country.