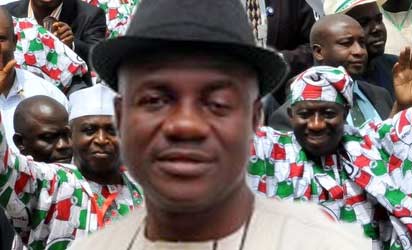 “I have been reluctant to gratify the microscopic few, who relish in fanning the embers of mischief and treachery, by throwing up this spurious claim. But, I am right now unable to remain taciturn, as it has begun to sit~in as true, to their gullible reading audience.

These factless goons argue that my appointment as Chief of Staff, Government House, Rivers State in 2012, by HE, Rt Hon Chibuike Rotimi Amaechi CON, Governor of Rivers State (as he then was), was liberation from an imaginary shackle of Political Oppression under the nose of Chief Ezenwo Nyesom Wike (now Governor, Rivers State).

This is Big Fat lie. Mere basely concoctment from the pit of hell.

For the records, I reiterate that I was appointed CHIEF OF STAFF GOVT HOUSE in 2012.

My first Political Appointment after School Environment, dates back to 1996, when I served as Executive Assistant to the Chairman of Obio/Akpor Local Government Area, under Chief Freddy Nwenenda Ichegbo (Then Executive Chairman, OBALGA).

The life of that supposed three years tenure was truncated by a military coup.

Thereafter, I landed back to School for Post Graduate studies.

In 1998, I was graciously appointed as Personal Assistant to Chief Eric Bekwele Aso (now of blessed memory), where I supervised conglomerates and who later became the Governorship Candidate of the Alliance for Democracy, Rivers State.

In 2000, I was reappointed into the Office of Executive Assistant to Chairman, Obalga, by Hon. Ezenwo Nyesom Wike, as Chairman of Council, notwithstanding that I was a staunch member of AD, and vigorously campaigned against his Election.

It was while serving under Hon E. N. Wike, that he graciously nominated me as one of the representatives of Youth from Obio/Akpor, to a meeting at the residence of Chief Andrew I. Uchendu, OON. (Now Ohna Senator Andrew Uchendu, where Ikwerre Youth Movement was birthed and I emerged as the Pioneer Secretary-General, in 2002. An office I occupied from 2002-2017, when I was removed in my absence, for supporting Senator Magnus Ngei Abe, for APC Governorship Candidate ticket.

I make boast that as Secretary-General, I had the time enough, to inaugurate ALL the 4 Chapters of Phalga, Kelga, Emolga and Obalga.

All the Branches, LAGOS and All Tertiary institutions in RIVERS and some in the neighbouring Imo State.

Virtually all or not to sound sweeping, most of the Units in hamlets, Villages, Communities and Towns, of Ikwerre extraction.

Mind you, Ikwerre Youth Movement, IYM, together with Ikwerre Women Forum, IWF, were formed on the same day, with the clear mission of mobilising, sensitizing and conscientising, Ikwerre Youths and Women, for Ikwerre Governorship for 2007.

The interest was clear. Rt Hon Chibuike Rotimi Amaechi as Candidate for Governorship of RIVERS STATE under the ruling PDP to succeed Governor Peter Odili.

I was the arrowhead and Chief driver of this painstaking mission, by my vantage position (Thanks to the President-General IYM, who gave me the opportunity).

Needless to recapitulate the prodigies achieved by IYM in that bid.

In 2003, I was put up by Obalga Stakeholders, led by Chief E. N. Wike, to contest against Chief Ike B. S. Chinwo (incumbent, member of House of Representatives, Representing Obio/Akpor Federal Constituency), in a Primary Election. But for the intervention of then-Governor Peter Odili as Leader of the PDP, in the State, the result was crystal.

In 2007, at the inception of Rt Hon Chibuike Rotimi Amaechi as Governor, I was nominated by the Stakeholders of Obalga, in a meeting convened at the residence of CHIEF E. N. Wike, then as Chief of Staff Government House and Leader of the Believers Family in Obalga, as Chairman, Caretaker Committee of Obio/Akpor Local Government Area.

Granted, my relationship with Chief Wike was getting a bit frosty at a point. Nothing else was the reason order than politics.

My loyalty by Chief Wike’s understanding was shifting to Speaker Amaechi, (whose brief I was holding, in the Youth arm). Understandably so. But it didn’t develop to a serious rift else, in 2007, under Chief Wike as COS and Leader of Obalga Political infantries, I couldn’t have been Chairman of Council.

After the 4 months of Chairmanship of Council, I wasn’t slated for any other appointment before 2012. At least none to my knowledge.

Frankly, I remained a very conspicuous and vocal member of the Critical Stakeholders in Obalga, with Wike as our leader.

I served as either Chairman or Secretary of Committees in virtually ALL programmes in Obalga, Appointed by Leader Wike.

In late 2011, months After the assumption of office for the second term as Governor of Rivers State, Rt. Hon Chibuike Rotimi Amaechi, announced his decision to appoint me as COS, after Wike had been nominated to the Centre, as Minister.

Wike was in that meeting that held in Abuja.

News however wafted that Chief Wike, then as Minister of the Federal Republic of Nigeria, got miffed at the announcement because he was not consulted according to the story slant available to me.

I reiterate here again that Minister Wike and I, were never enemies as we never contested for any particular office, nor were our Communities in any clash.

His rumoured resistance to my appointment, was again, purely political.

He feared the motive behind my appointment coming from the same LGA with him, without being consulted.

Fear of rivalry and threat to his political empire/hegemony were palpable. He kicked.

Thanks to the resolve of the governor who wouldn’t allow anyone to dictate to him, who his Chief aide should be.

Please does this amount to political incarceration or colonisation of Tony C. Okocha by Chief Wike?

I challenge anyone to state the contrary or let the purveyors or conveyors of this fairy-tale, drop their chicanery.

What beats my imagination and indeed gets me more surprised, is that no one has been able to point to the events thereafter in Obalga and the Office of COS.

What the few who fly their stock-in-trade do, is to play up the falsehood that it was my eventual appointment as COS, that severed the chord of the relationship between Minister Amaechi and Governor Wike.

They play up imaginary enmity between Governor Wike and Tony Okocha.

I dare to ask: (1.) When Wike as OBALGA Chairman, appointed me as his Executive Assistant in 2000, who compelled him to. Could it have been Amaechi? (2.) Could he have appointed his enemy to be his Chief aide? (3.) When in 2007, Wike with all the powers he wielded, presided over a meeting of Obio/Akpor Stakeholders, where I was nominated as Chairman, CTC, Obalga, were we enemies? (4.) Please at what point did the rumoured enmity between Wike and I, start and what was/were the reason(s)? (5.) As Chief of Staff Government House, did I sell out to Wike either for lucre or any other consideration when the ovation was loudest? (6.) As Chief of Staff, was I supposed to have solely won elections for APC in 2015 but failed? (7.) Was Obio/Akpor Local Government Area, that I was Leader, the only LGA that APC Lost Elections? (8.) What of Kelga, the LGA of the then sitting governor? (9.) Was there a case of incompetence in the administration of the Government House and the Management of my Principal? (10.) Was my appointment by any reason, merited by virtue of my contributions or I was a beneficiary of undeserved Goodwill? (11.) Reading my account herein, Was the office of COS, the first Political Office that I occupied? (12.) When and why did my relationship with my former boss, get awry? (13). Was it as a result of corruption, insubordination, theft, incompetence and/or ineptitude?

Conclusion; I implore all with objectivity and a sense of responsibility, to point to any index of Political incarceration/dungeon that I was lifted from by reason of my appointment as COS.

Let me also note that my acumen/Political sagacity spoke volumes and shone so crystal clear that they endeared me to Progressive minds.

As one of the recompenses, I was found worthy and appointed the Chairman of Bola Ahmed Tinubu Support Vanguard in Rivers State.

I have accordingly commenced work, bringing to the fore, those charisma, positive energy and dexterity that worked in 2007 and 2011 respectively, in Rivers State.

Any is at liberty to join issues, contradict, controvert, countermand, modify or completely reject my offering hereunto with superior facts and arguments not emotions.

Mind you No insults. No vitriolic as I have not done so to anyone.

Why I Accepted To Co-ordinate TINUBU’s Campaign In RIVERS was last modified: November 30th, 2021 by City People

Meet The 12 New Members Of Association Of Friends