Why I Am Contesting ADO LG Chairmanship – Wife Of Ex-Chairman, Princess MOTUNDE FAJUYI 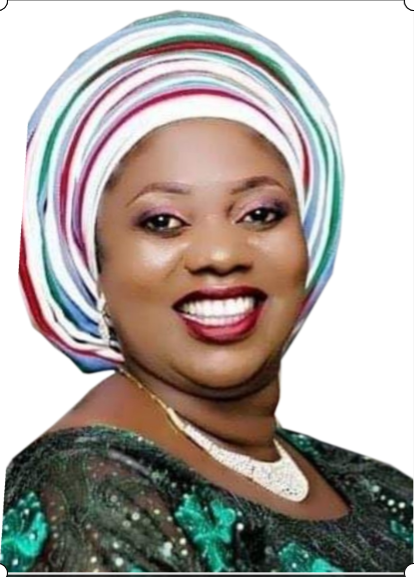 Princess Feyisayo Motunde Fajuyi, nee Abiodun, is the pretty wife of Ado Local Government former Chairman, the late Hon. Barr. Adedayo Fajuyi, who is the son of the late former Military Governor of Western Region, Lt. Col. Francis Adekunle Fajuyi. Hon. Barr. Adedayo was the first Executive Chairman of Ado Ekiti in the present political dispensation and the ALGON Chairman in Ekiti State. Princess Motunde was inducted into politics by her late father, Chief J.A Abiodun, who was a prominent politician in Ekiti State, in the early ’80s. This year marks her 38 years in active politics in Ekiti State. She is, indeed a force to reckon with. She is a chieftain of APC. She is also the Pioneer National Secretary of the women in ALGON in Nigeria. She was caretaker Chairman, Ado West LCDA, created by Gov. Kayode Fayemi and the Executive Director “Be the change organisation”. City People ADEOLA SHITTU was recently at her campaign office in Ado Ekiti and she opened up on her political journey and her chairmanship ambition.

You are, indeed, one of the respected female politicians in Ekiti State, how does that make you feel?

I thank God. I was inducted into politics by my late father in 1981 and here I am today. I have occupied several party positions, community leadership positions, even church leadership position, but the political position was what God used to bring me to limelight and made me to be well known to people as the wife of Ado local government chairman in 1999-2002.  Then, I was the pioneer National Secretary of all women in ALGON in Nigeria. I was directly attached to the office of the Vice President wife, Alhaja Titi Abubakar, and we did our bit. I’m proud to say that after us then, I have not seen any woman in ALGON, as functional as us till date. At a point, I was coordinating all-female candidates in Nigeria when I contested a senatorial seat on the platform of  ANPP.

This year marks your 38 years in politics, what really inspired you to go into politics?

I grew up to know my father as a politician. I never thought one day I was going to be a politician like him. My father was a big-time politician to the extent that his house was burnt down during a political crisis and I was the one at the receiving end. It was a terrible time. I remember it was a day to my presiding at harvest in my church. I was thrown out of the window and I landed on my feet, and I stayed indoor for almost 2 years. Years after, my father was given a slot for Assistant Secretary of his local government in Ekiti central then and he nominated one of my cousins, but the party rejected it and said they needed one of his children for the slot. I was the youngest and the only one available then. So, he asked them to put my name and when he informed me. I told my husband and we all celebrated it with Akara and palm wine. Though I didn’t really understand what I was going to do there, as someone who is dutiful and always wants to be responsive to duty calls, I put in my best.

In a couple of months from now, Ekiti State will hold its local government elections, is Princess Motunde Fajuyi also contesting?

Thank you very much. I will say by the special grace of God, I want to contest and serve my local government are in my own capacity. Though this is not the first time I will be contesting, but I will say the two times I have ever contested, I was called to contest. My first attempt, I got a free ticket to contest for senate. I wanted to reject it, but my late husband advised me not to.  And it was a good one that really promoted me and the people were able to match my face with my name.  Before then, I was always at the background doing my bit like a home support services, but by the time I contested the APC Ekiti central senatorial district seat in 2015, everyone knew me. Though I didn’t win the primary election, it was another opportunity to tell my people that women would always be better. I must say that even the party’s candidate then, who is now late, couldn’t have made any impact having the last administration in power then.  Anywhere I am called to service, I do it with passion because service is my focus and I’m ready to serve and make my own impact if given the opportunity. So in a nutshell, I will say service to humanity inspired me to join the chairmanship race.

Having contested a Senatorial seat before, why Local Government Chairman now?

It’s a simple equation. Many of us couldn’t be at the Senate or House of Reps or State House of Assembly, but in politics, there is what we call balance. One, my senatorial district is made up of 2 federal constituencies with 5 local government areas. The former Senator was from Ado. Ado Ekiti has produced the Deputy Governor and the only political office available for now is Chairmanship’s position. So, one shouldn’t be selfish on issues like that when it comes to balancing. But I discovered that if you really want to make an impact like Baba Afe said the other day, that you should serve your people at the local level first. You serve where you can make an impact.  My sister, serving at the local government level is like is one representing the President and the governor at the local level and you make sure the impact of your governor is being felt by the people and if one fails to do so, your people will get less attention from the government. So, I’m ready to serve my people and make sure that you sacrifice for them. Politics is all about service.  Even in football, they don’t put their best 11 out at once, some will be at the federal level, others at the state level.  Some of us who are close to the grassroots would do the work here. For instance, I have been living in Ado for over 35 years of my life, aside from the fact that I’m from here.

In Ado Ekiti alone, we have not fewer than 4 aspirants eyeing Ado Local Government Chairmanship with their mini billboards and posters everywhere, we are yet to see yours?

I was brought up by a school principal as father and my mother was a teacher before she ventured into trading. I’m married to a lawyer and I will say I know a bit of law as far as elections are concerned, on what to do and what not to do. The Ekiti State Independent Electoral Commission (EKSIEC) has just been constituted. In those days, you don’t print posters until you are a candidate but the reverse is now the case. That is why you find the town littered and defaced by all manner of posters. You can imagine if we have 10 aspirants for a seat, what the town will look like, so I believe those doing it now just want to be known, but they are breaking laws and the rules of the election. As I said, EKSIEC had just been constituted and they are yet to roll out their game plans for the local government elections, which is likely to take place later this year. Why don’t we wait for them to blow their whistle before we start running? So on the issue of my posters, I won’t join them, rather I will wait for the whistle to be blown by the EKSIEC, then they would know we are ready.

Your advice for mothers and other female politicians who see you as a role model?

I learnt that Garden of Eden, which was created by God, was watered by 4 rivers.  So, as a mother or politician, I will advise we should always discover ourselves and we should engage in more vocation. Being a politician, banking is not enough to sustain one. In my own case, I discovered my love and passion for poultry keeping, so at a stage, I was thinking of it and I went into it and to God be the glory, I have succeeded in it to a point and when I wanted to get into active politicking, I had to stop again. You see change is the only permanent thing in life if you can’t discover yourself and move on, forget it. I’m into Agriculture business because I’m married to a man whose father’s love for agriculture is second to none. Despite being the governor of a region, he still has miles of land that are still functioning.  So, I got into farming business and today I do my Agric business without any disturbance or distraction and it gives me the opportunity to exercise myself. So women should know that they are the managers and they must be able to manage every situation well to their advantage and to the benefit of all that is very important.