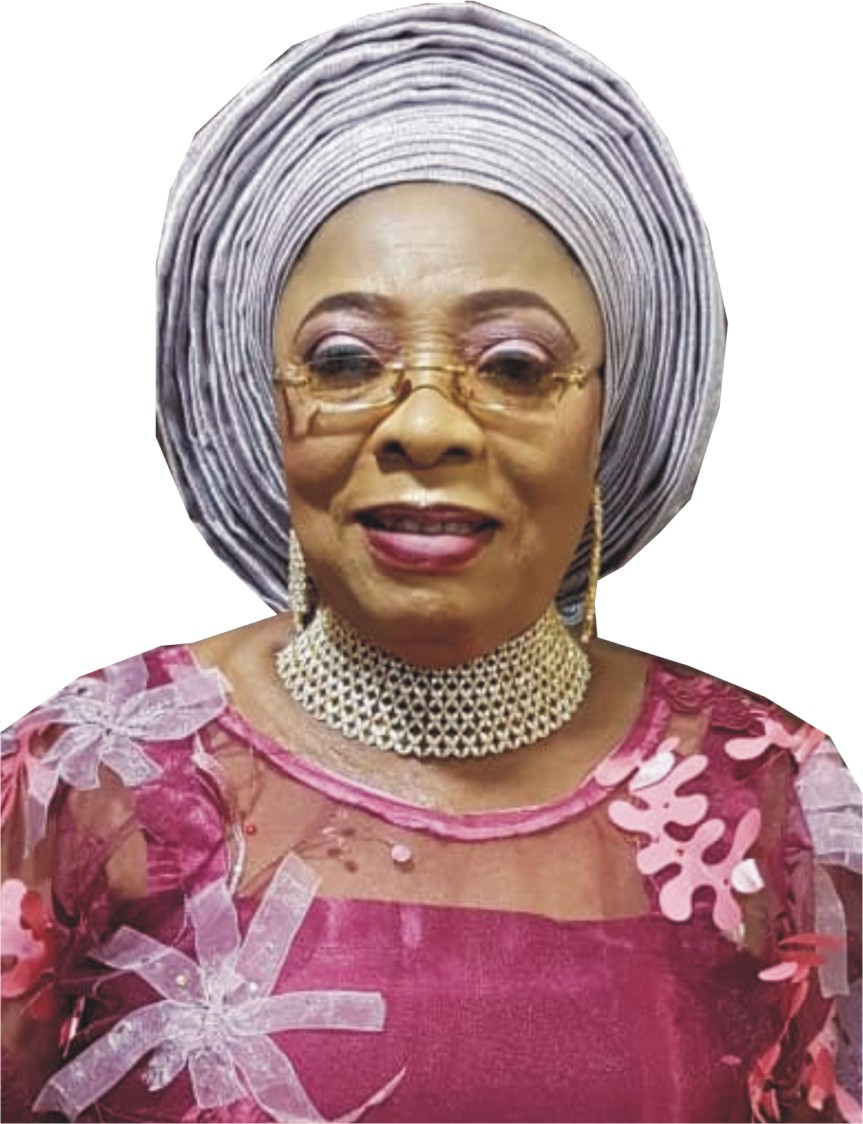 The big news is that this pretty woman is running for one of the House of Reps seat in the state. She wants to represent Abeokuta South/Odeda/Obafemi Owode Federal Constituency at the House of Representatives come 2019. And she is serious about. She has started consultations already, ahead of the party primaries to be held in a few months time.

Who is Princess Ronke Ogunremi? Why did she decide to run for the House of Reps seat? She told City People Publisher, SEYE KEHINDE her reasons last week in Abeokuta.

There are rumours that you are running for public office. Is it true?

Its true that Princess Ronke Joseph Ogunremi from Abeokuta North in Ogun State is contesting I have an aspiration to run for the House of Representative, come 2019 and my constituency comprises of Abeokuta North, Obafemi Owode Local Government, and Odeda Local Government-3 local government.

For a long time, I have been in politics. I will say I was actually born into politics. My father was a strong member of NCNC in those days in Lagos. His position then was like a member of the House of Assembly now. He was the one controlling the whole of Ebute-Metta, the Mainland in Lagos State, at that time. From then I had been into politics, listening, watching, following him. I was very, very little then. At that time, I didn’t understand most of what he was doing then. It was after growing up that the whole thing dawned on me.

When I came back home to Abeokuta, I was very friendly with late Mrs Stella Obasanjo and so when it was time for politics and the husband came back from prison, I was with her. We went round the whole state together. From there, I was gaining more interest.

When Otunba Gbenga Daniel became the Governor of Ogun State, that gave me more inspiration to actually delve into it. I served under him. I was the General Manager, Gateway Hotels, Abeokuta throughout the period he was Governor. After that we’ve become family friends. And my interest in politics grew because of what I learnt from him-his way of doing thing, his thinking, his approach to things. I am one of those who understudied him.

So, I just felt that with all that I have known all these years, it’s about time that I came out to run for others to benefit from my experience, to be able to assist people. The welfare of people is very, very paramount to me. That is the main reason of my coming out to contest for the House of Representatives.

One question people will keep asking is: Is PDP still strong and organised enough to win seats in the House of Reps?

Of course, yes. We are strong because the current government didn’t do well and people are not happy with the government of the day in Ogun State. Everywhere we go people call on us, PDP please come back. When you were there, we had money to spend. We were able to eat. Even fashion designers also beg us that when you come back, there would be a lot of ankara to be sewn. It makes me to believe that Ogun State people want the PDP to come back. They feel they want a good change. This is not the change they bargained for that they got. PDP is the alternative in Ogun State.

The PDP is in crisis practically all over the states like Ogun. How can Ogun PDP that is in turmoil bring stability to Ogun State?

Yes, we have a lot of crisis here in PDP, just like in other parties. But lately, things are being resolved. You must have heard of Kashamu visiting Otunba Gbenga Daniel to end their rift. You must have also heard that Hon. Ladi Adebutu too has made up with OGD. So things are getting better. The PDP is becoming stronger, unity-wise than where we were about 3 to 4 months ago. That says it all.

I was born in Lagos, at Oko Baba Street, I grew up there in Lagos. I didn’t know anywhere else until I went to England. When I was still here, then, my father was a school proprietor at Apapa road, Lagos Mainland. I attended that school. I left there I went to the best school at that time for females, called Methodist Girls High School. a school that I am very, very, proud of. I left there after my school certificate. I went to England, to a College of Technology in Northampton where I studied up to the Intermediate level, what you call C.I.S I was going to read Law but I was late in registering.

I did C.I.S for about a year. A friend of mine came to London on a visit and said come and go to Pitmans College to learn Shorthand, that this will help you. So I went to Pitmans College. From there I started working at National West Minister Bank. It was called National Provincial Bank at that time.

When I started working there, I was one of the 11 blacks employed at that time. It’s like they wanted to experiment with blacks and I was there at that time, as a test run, sort of, all over England. The Press kept coming to interview me about my experience, obstacles, challenges and we told them, how at the beginning we were not accepted by the white customers. The people we were working with accepted us but the customers didn’t. When its my turn, I will be at the counter nobody will come to me, because I am black. After a while I got used to them and they got used to Ronke, that black lady from Nigeria.

After that I came back to Nigeria and I started working with Nigerian Bank For Commerce and Industry. It was newly opened, I was one of the pioneer staff there. After about a year, I was invited by a friend to meet one Mr. Neil Cameron of Eko Hotels Ltd. He was the GM then. They had not started yet. I went with my friend to meet Mr. Cameron that he needed an experienced P.A. Immediately he saw me, he fell in love with me. He said whatever I wanted he was ready to pay me to come and be his P.A. I accepted.

That was how I left Bank For Commerce and Industry and I went to Eko Hotels Ltd. We were only 3 that started Eko Hotels Ltd. From there, I left for the operations. Then it was called Eko Holiday Inn. I spent about 25 years at Eko Hotel. I got to the position of General Manager before I left. Along the line I went back to school to study Hospitality. I went for so many courses to learn about hotel management.

I retired from Eko Hotel and I came back. My husband decided he was coming to settle down in Abeokuta, so we moved down here. That was when I joined Stella Obasanjo for politics.

As a board member of FERMA that was when I met Otunba Gbenga Daniel, at one of his meetings in Abuja. I was representing the whole of the South-West. He said he had been looking for me. He told me they had challenges on roads in Ogun State. That’s how I met him. And we’ve been together ever since.

What are you promising your constituents if you are voted in?

My focus will be on the women, the aged and the youths will be my greatest concern. I had acquired a land that I had fenced at Imeko. I want to have an old people’s home, where there will be a small hospital, like a clinic, canteen, nurses and caterers to take care of them, male/female. I have had that in mind for a longtime and I actually want to actualize it. I hate to see old people not cared for.

As for women, I can see that women are being marginalized and they are not getting the right treatment that they should get especially those who go out to borrow money from agents. When they fail to pay back that money on the due date the treatment they get is terrible. If they fail to pay they would ridicule them in the market place.

At times they lock them up in the toilet and leave them there for a whole day if you fail to pay.

I have started work on changing that in my ward. I gave them a certain amount of money to lend women without interest; let them pay it back on a weekly basis. I told them to start with 20 women. And I can tell you now, there are over 100 women benefiting from that.

That is the concept I have in mind for my constituency.

As for the youth, I also plan to empower them. I have told them, it is not everybody that will be a doctor. It’s not everybody that will be an engineer. It’s better for you to have a trade. You will need to be trained for something. And I started with 2 of them. There is this young man who said he would love to be a make over artiste and he would like to combine it with hairdressing, and barbing.

He said that is what I would like to specialize in. So, I got a place that has everything like that and I put him there. He is doing very well.

Another one said, he wanted to be a fashion designer. I took him some where else and I paid. I bought the kits for him and I paid for training, N150,000 here, N150,000 there, to keep them occupied, all to keep our boys off the street. I am very passionate about that. When they have a profession they are doing, they will not get involved in crimes. They will be too busy and tired. Let’s get them pre-occupied.

Those are the things I have for my constituency.

How were you able to carry your husband along to support your political activities?

I have the best husband in the world. My husband understands me very well and I understand him also. I have his full support. In anything I want to do I discuss it with him first. When OGD invited me to come and run Gateway Hotel, Abeokuta, the first thing I told him is, I will have to go home and discuss it with my husband and whatever my husband says, I will get back to you sir. I told him and he said I should take the job. That is how we live in our home here. I get his full support. I also consulted my children. They said Mummy go ahead, take it, it will keep you busy and we want you to be busy. I have the support of the family.