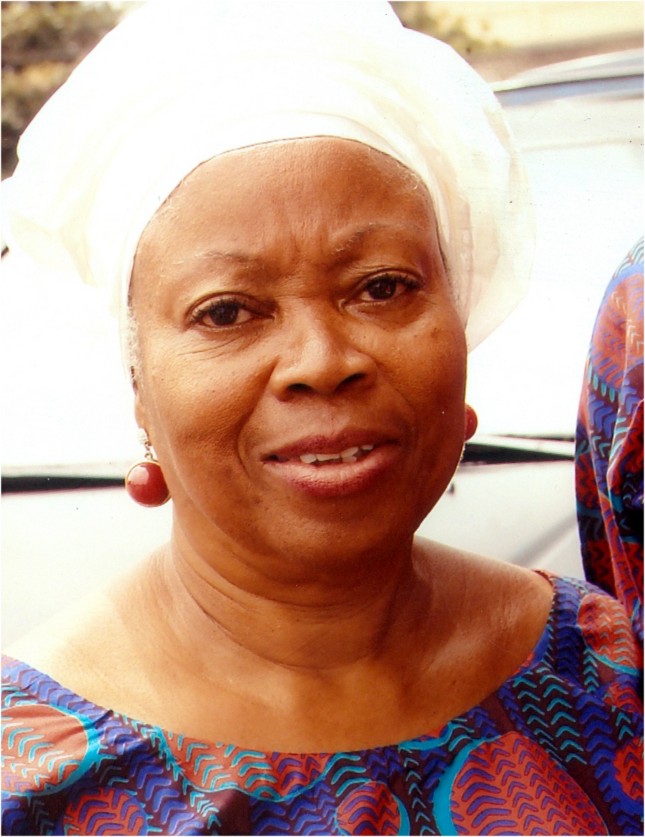 Mrs Agboola Fisher-Thomas will be 70 in September, but you won’t know unless she tells you. She has been actively involved in the politics of Lagos State for close to 25 years and she has served in various capacities. Call her, a seasoned politician and you won’t be wrong. She is a valued member of the PDP in Lagos and she is one of those currently vying for party office which comes up in a few days.

She wants to be the next PDP women’s leader in the state. And she says she has a lot to offer the womenfolk in Lagos. She recently told City People her plan.

Who is Mrs Agboola Fisher-Thomas we asked her? “I am an Entrepreneur. I am a Welfare Director of an NGO. I have an Estate company that I do with other people. I am also a Lobbyist. Because at times people want to get somewhere and they need someone to put in a word or two for them. I do that for people and I charge for it. I used to work for the People’s Democratic Institute in Abuja. I worked with them for 2 years. I was a Consultant with them.”

How does she juggle all of these? “I am always saying that Jesus Christ was a multitasker. He was a fisherman. He was a preacher. He was a carpenter. He did all those things. One needs to learn. If you are just doing one you might not be able to meet your financial obligations. So you need to do 2 or 3 things together. It’s all about managing your time”.

Is she a Lagosian? “Of course, yes,” she says matter-of-factly. “I am a Lagosian of Egba heritage. My maiden name is Fisher. I am Mrs Thomas by marriage. And my mum’s name is Mrs Tectler. I am a thoroughbred Nigerian. I have links with Abeokuta. My father went to Igbobi College. My mum went to Methodist Girls High School. My mum was a Pharmacist”. How does she always feel each time she looks back at her heritage? “I am always proud of it. I am proud of my history, my heritage. It’s all proud of growing up”.

How did politics come into the picture? “It’s a long story. I started off with being Afenifere, interacting with the babas in Afenifere. When UNCP came we asked for their opinion about the new party and they asked us to check it out. I joined UNCP. I enjoyed UNCP until the story behind UNCP came out. Then the Babas formed Alliance for Democracy. So, I was part of the Alliance for Democracy. Along the way, they lost their hold on the party because of somebody that was clever than them and who was able to play them out. When I saw that, I left Alliance for Democracy.

I actually had an altercation with the then Governor of Lagos State. We had a meeting where he called all the executives of the parties at various levels. At that time, I was Secretary to my Ward of AD and we had a meeting at Alausa. Everybody was there. He said we should ask questions and I said I don’t understand why because we started all these things together and I remember vividly when we started that you didn’t have anything and now you are going around in big jeeps and I am still barely able to pay children’s school fees. He now answered by saying are you saying I am a thief. I said I didn’t say that but if that is what you think it is and if the cap fits you, you are free to wear it. There were massive altercations. Journalists were sent out. That was how I started to respect Sen. Mamora. He jumped on the stage to douse tension. The Governor was angry. That is to be expected. That was an open confrontation. He now said I should leave the meeting. I was actually going to leave. You know we sit local government by local government. Surulere LG started moving the chairs away from me. When they saw I was going to go out, Lagos Island Chairman got up and said, if she goes, we leave. He now said Lagos Island delegates get up and they got up and Mushin now got up and Mamora now jumped on the stage and said No, no, no. This is a familiar affair.

The whole thing was resolved. But I realised that I can’t be in a party where I can’t voice my opinion. This is not the best environment for me. This is how I went to PDP. And I found out that I am comfortable there. I have been in PDP from 2003 up till now. I spent 4 years in Alliance for Democracy. But then at a point, I left PDP also like 3 years ago. I was offered State Chairman of a new party, Alliance National Party. I was their Chairman for 9 months. I went there not for anything but to be able to unite in my story that I have also been the Chairman of a party. To be able to say she was the former Chairman of that party”.

What was her experience like? “Wow, it was a totally different ball game. Everything is on your shoulder. And you get to know people for who they are. A lot of people do lip service. For many Nigerians, it is only about Naira and Kobo. It is sad. When I saw that the man who was the founding father of the party was not even confident enough to be part of what he had found, I left.

My thinking nothing ventured, nothing gained. That is my life I gave it my best. There was no funding. I had to run around to look for money to fund the party. I am glad to say some people, one way or the other just had tiny trust in my person and so when I asked for funds, family they supported me because I will let you know exactly what I am going to use it for and I will get back to you with the results. One thing I have learnt now, that I didn’t learn before is I needed to be taking Photographs. I didn’t use to do that”. How has she been able to cope with Politics in Nigeria because people say it’s dirty? “Nothing in life is easy. But my view is that nobody is going to do it for us, except us. We are complacent here in Nigeria. We don’t follow through. We have to be tenacious. Being in politics has not been an easy feat for me. When they hear me speak, with my accent, they will tease me by saying Oyinbo lo ma so bi opere. I have learnt to take the Good with the Bad. There must be a lot of Humility in it because we are slightly envious people. So, I had to be humble about it. It took me a long time to accept. When you are silent. When you observe more and when you talk less, you will get results. People will gravitate towards you. One has to learn to be humble. And then you have to give it your best. And the reward is enormous”.

She wants to be the next women’s leader in Lagos. Why did she decide to give it her shot, we asked? “I have been at this politics for like 30 years and I am always, always at the corridors of power, but always in the background. I am not one that pushes myself forward. And then I realised that I have been at this thing for a while and all I do, and all we do is we complain. But we don’t put ourselves forward. And you know in PDP we do zoning and all that. I said ok, what position can I come out for that will not be butting to many heads. I looked at it. I can’t say I want to be the State Chairman. And I didn’t want to be the Secretary because I thought I am not going to sit down and not be able to talk because really the Secretary is the engine room. You talk less but you listen to what people are saying. So, I said I am leadership by example. I am first and foremost a woman. So, why don’t I go for the Woman Leader? People undermine positions. Nigerians have a way of undermining positions. The 1sts point of call for women when they come into Lagos State, anybody that comes into Lagos State and says I want to see political women. The party will send the Women Leader. She is the representation of the women of Lagos State as far as whoever is coming in is seeing. Yet, we undermine that position as women we look at women who do Women Leader as inconsequential. I go to meetings and some people tell me, Aunty Agbo, eyin le ma mba awon women leader sere ooo. We don’t want to see beside them, as if they are less important. Whereas these women leaders are the first point of call.

So, I thought that is a position they can’t fault me for vying for. That is why I picked my form. I don’t want to get involved in the politicking of the position being zoned to East, West, South. I don’t want to get involved in politicking. All I did was I called the bonafide head of PDP in Lagos State Chief Olabode George (BG) I spoke to him and he said Agbo, we didn’t zone it to Lagos Central. I said Bros, I am not fighting the zoning. All I am saying is I have something to give. I have something to offer. I am not young anymore. So, I will like to give it before I go. I am always saying that and people are always telling me, don’t say that. You have got more years to live. I will like to project this image before I go. I am not asking anybody to acknowledge or endorse me. I am not butting heads. If it happens well. If I only get one vote, fine. But let me put myself out there to see if it is actually possible that people will see what I have to offer. I want to put something out there that is just more than just being political. After telling Chief Bode George, I picked up my form without telling anybody else, went around to fill my form, some people refused to sign some signed. No problems. You have to have 80 people sign the form spread across the 20 local governments. So, I started going around, talking to people to please sign my form. I actually approached people personally and gave a personal touch to it. I then invited the then women leaders of the local government and told them about my aspiration and asked them if they could support me. And I took it from there. The election is on the 19th of February, 2022. By Gods Grace”.

What are the things he is looking at doing differently? “First and foremost, women have a voice but they don’t know how to use it. So, I will like to encourage them, to use it. Women once pushed to the corner become aggressive.

Why I Want To Be The Next LAGOS PDP Women’s Leader – Mrs AGBOOLA FISHER-THOMAS was last modified: February 8th, 2022 by City People