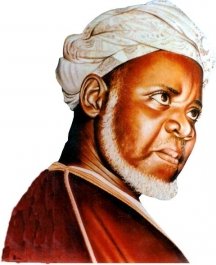 Have you noticed that there is the sticker of an old bearded Islamic cleric on many commercial buses, trucks and tankers across Nigeria? His name is Sheik Ibrahim Niasse. It’s a fact that you are most likely to see his picture on one out of every 10 trucks you see along the highway from Lagos up North. He is also very prominent in the Northern region of Nigeria.

Many people don’t know Sheik Ibrahim is not a Nigerian but from Senegal. But the account of his many deeds in West Africa, and Nigeria, in particular, gave credence to his prominence in Africa and the Middle East.

Sheik Ibrahim Tijani was a major leader of the Tijani Sufi order of Islam in West Africa.

His followers in the Senegambia region affectionately refer to him in Wolof as Baay or “father.” He is the founder of the Ibrahimiyyah branch of the Tijani order, whose adherents designate themselves in Arabic as the people of the Faydah Tijaniyyah (Tijani Flood) or, in Wolof, as Taalibé Baay (disciples of Baay).

Outsiders often refer to his disciples as Ñaseen, which in Wolof means “of or pertaining to the Ñas family,” although his disciples do not generally use this designation. Baye Niass(Sheik Ibrahim Niass) is estimated to have about 250-300million followers today.

There are records of testimonies and display of divine wisdom credited to the cleric, while he was alive and even in death. Some of his followers believe the call of his name awakens his spirit and therefore, the psyche, Niasse is usually pronounced after his name is called anywhere and anytime.

So, who is Sheik Ibrahim Niass?

We can tell you. He was born in 1900 in the village of Tayba Ñaseen between the Senegalese city of Kaolack and the border of Gambia, he was the son of Alhaji Abdullahi Ñas the main representative of the Tijani Sufi Order, often referred to as Tareeqat al-Tijjaniyyaa, in the Saloum region at the beginning of the twentieth century.

During his youthful days, Sheik Ibrahim relocated with his father to the city of Kaolack, where they established a religious centre. After his father’s death in Lewna Ñaseen in 1922, Sheik Ibrahim’s elder brother, Muhammad al-Khalifa, became his father’s successor or Khalifa.

The 22-year-old Sheik Ibrahim spent most of his time farming in the family’s fields and teaching a growing number of disciples in the nearby village of Kóosi Mbittéyeen. Although Sheik Ibrahim never claimed to be his father’s successor, due to his charisma and precocious knowledge, he gained a large number of disciples, and tensions arose between his disciples and those of his elder brother, Muhammad al-Khalifa.

In 1929, Sheik Ibrahim announced that he had been given the Key to Secrets of Divine Knowledge, and thus became the Khalifa of Sheik Tijani in the Tijaniyya Order, a position yet to be attained by anyone as of that time.

In 1930, after the prayer of Eid el-Fitr (the end of the month of Ramadan), a fight broke out between Sheik Ibrahim’s disciples and those of Muhammad al-Khalifa The incident made Sheik Ibrahim immediately decides to relocate with his disciples to a new place.

During the summer of 1945, he re-established himself in his father’s house in his natal village of Tayba Ñaseen, rebuilding and reorganizing the village after a fire outbreak had destroyed much of it.

Sheik used to say “I learned the Quran and Hadith from my father and from him, I received my ijaza”. It is notable among many that Sheik Ibrahim Niass learned both Quran and Fiqh all from his father. It is evident that after the demise of Alhaji Abdullahi Niass, the Sheik gained access to his father’s library and mastered several books at that young stage.

Sheik Ibrahim’s fame quickly spread throughout the countryside, and most of his father’s disciples ultimately became his disciples in spite of his junior status in the family. Although his disciples remain a minority within Senegal, they form the largest branch of the Tijaniyyah worldwide. In an unlikely role reversal during the 1930s, several leaders of the Arab ‘Idaw?Ali tribe in Mauritania—the same tribe that introduced the Tijani order to West Africa—declared themselves disciples of Shaykh Ibrahim. Notable among them were Shaykhani, Muhammad Wuld an-Na?wi, and Mu?ammad al-Mishri.

Tareeqa al-Tijaniyya al-Ibrahimiyya, as the shaykh’s disciples came to be known, flourished and gained large numbers of followers during the 1930s and 1940s throughout North and West Africa. In 1937 upon meeting Sheik Ibrahim during a pilgrimage to Makkah, the Emir of Kano, Nigeria, Alhaji ‘Abdullahi Bayero gave his oath of allegiance to the shaykh and declared himself a disciple of Sheik Ibrahim. That incident made Sheik Ibrahim gain the allegiance of many of the prominent Tijani leaders of Northern Nigeria and also many others who were not Tijani prior to this time.

Alhaji Abdulmalik Atta – a prince from Okene and the first High Commissioner of Nigeria to the United Kingdom – was one of Sheik Ibrahim’s closest disciples as well as the shaykh’s father-in-law through his daughter Sayyida Bilkisu. Sheik Ibrahim became a renowned Sheik al-Tareeqa (Master of the Sufi Order) throughout the Hausa areas of West Africa. In the end, he had far disciples outside of Senegal than within it. At the time of his death in 1975 in London, England, Sheik Ibrahim Niass had millions of followers throughout West Africa.

The Sheik was the first West African to have led the Azhar mosque in Egypt after which he was honoured ‘Shaykhul Islam’. He became very close with many freedom fighters in West Africa due to his contribution to Independence in the African States. The Sheik became friends with Ghana’s first President, Dr Kwame Nkrumah who became fond of him and always seek advice from the Sheik.

Others such as Gamel Abdul-Nasser of Egypt were all friends to him. The then King of the Kingdom of Saudi Arabia Faisal also loved him so much and respected him. Sheik served as the Vice President of the World Muslim League with the King being the President.

His branch of the Tijaniyya, Tareeqa al-Tijaniyya al-Ibrahimiyya has become the largest branch in the world. Sheik Ibrahim, during his lifetime, performed many miracles that can’t be explained by the laws of natural physics.

There was a time he went to Egypt and was tested by all the men of deep knowledge and the king, the Shayk answered all the questions perfectly. After there seemed not to be any more question, Gamel Abdul-Nasser ask him to prove the law of Archimedes in physics wrong. A glass full of water was placed before the Sheik and was asked to add a substance without the water dripping out of the cup.

The crowd stood still and wonder how the Sheik would solve the problem, but Sheik Ibrahim, sitting there relaxed did not look worried. He reportedly pulled out a strand of his beard and placed on the water. It flowed on top and no drop of liquid fell out of the cup. The crowd stood with their hands raised in applauds.

There was also an account of Shayk visiting a country and was surprised by the inscription at the border town. An inscription had stated that visitors are advised to pull down their robe and baggage of knowledge as “This is where true knowledge starts and ends”

Sheik Ibrahim stood by the bother, while he wrote on the soil of the border. Within minutes, it was reported that the power grid went off across the country, and no one was able to fix it. After rigorous search and inquiry to identify the problem, the government was hinted about the man at the border. He was contacted and implored to restore the power plant back to efficiency after a profound apology. He was said to have erased what he wrote in the sand before the power was restored.

Sheik Ibrahim had once been reported to have appeared in two countries at a time. He was said to be in Saudi Arabia and at the same time, leading prayer in Senegal. His followers did not believe until the listen to the radio and got the news that he is actually in Saudi Arabia for a conference, while they look at him materially in front of them.

There was an account of a very massive frog that once crosses the rail line at the risk of causing a fatal train wreck. The coach driver was alerted and Sheik Ibrahim who was in the train got down and move so close to the frog which was double the size of a truck, and dialogue with the amphibian creature, after which the frog dragged itself away from the rail. This proved the argument that Sheik Ibrahim also speaks with animals of all kinds.

The Grand Shaykh died in London on 26 July 1975 in St. Thomas Hospital at 12:03 noon. The Shaykh’s death shocked many people.

In an account of the life of Sheik Ibrahim, one of his prominent students, the Grand Mufti of Nigeria, Sheik Sherif Ibrahim Salleh Al-Husseini said that before the Sheik died, he asked his last wife, Sayyida Bilkiss to try and get Married because he is not a prophet, for it is only Prophets whose wives are not allowed to marry after their death.

It will shock you that even in death, Sheik Ibrahim is still performing miracles beyond imagine, especially for those who still doubt the mysteries in Islam.

In the mid-1990s, of a student of the University Of Lagos, Unilag, according to report once painted the face of Shayk Ibrahim in a sticker pasted on Maruwa tricycle, and her vision went blind immediately. Her vision was restored after several prayers and supplication and the ink on the sticker removed.

The gang were questioned and they stated their intention, is to rob the store, but according to them, an old the bearded man whom they met inside the store ordered them to wait for the shop owner.

When asked about the identity of the old man, the robbers pointed to the sticker of Sheik Ibrahim. The woman, who is a Christian said she met the sticker in the shop when she rented it but decided to keep the sticker because he seems to like the man in the picture.

What Every Muslim Should Know About RAMADAN...