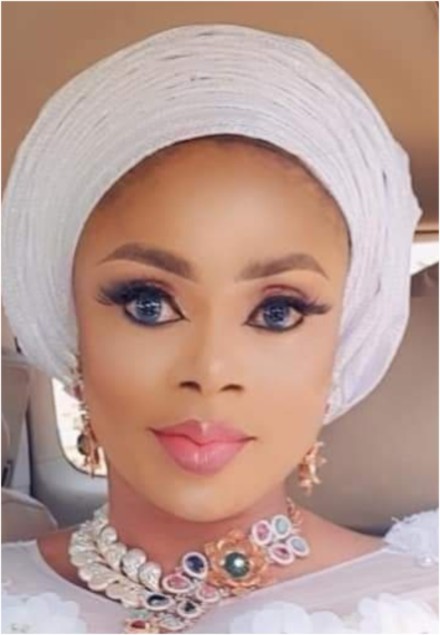 On the 4th of May 2021, the famous London based blogger, Madam Tolulope Abike Olowoagba popularly known as Abike Jagaban took the day to give out to the needy under the Abike Jagaban Helping Hand Foundation. The event took place at the elegant palace of his Royal Majesty, Oba Abdul-Fatai Akorede of Itoriland in Ogun State. The famous Abike Jagaban, just 5 months ago was crowned the Yeye Bewaji Okin of Itoriland in the most glamorous event. She took it upon herself to give back to the kingdom of Itori by empowering the Itori community with 2 borehole systems and many other items for the widows and less privileged.

During the event, City People Reporter, AKANDE DAMILOLA had an interview with her where she revealed amazing information about herself, below are the excerpts of the interview……

Your are full name is Madam Tolulope Abike Olowogaba but you are popularly called “Abike Jagaban”, how did you coin the name “Jagaban”?

Okay, my real name as you have said is Tolulope Olowogaba but my stage name is “Abike Jagaban”, I hail from Ogun State. As known by all I present shows on social media, I am a blogger and I run a “say no to cyberbullying course on Facebook and other social networks. I was also titled the Yeye Bewaji Okin of Itoriland by his Royal Majesty Oba Abdul-Fatai Akorede Akamo the “Olunla Abodere” of Itoriland sometime last year. I was not expecting it but the title came and by the grace of God we have been doing tremendously well. I coined my name using my real name “Abike” and “Jagaban” is like a title behind it as we all know it to be used by the former Governor of Lagos State, Senator Bola Ahmed Tinubu Jagaban refers to a fierce leader who is ready to do anything and sacrifice anything for his community, country and its affairs. That is why I adopted the name and I think I have been living up to the expectation of being such a leader and I give thanks to God for that.

When did you go into blogging and why did you start the “Say No To Cyber Bullying” course?

I went into blogging 6 years ago that is in 2015 to be precise. I started  the “Say No To Cyber Bullying” course because I was once a victim  some years back,  there was a misunderstanding about me so I decided to stand for myself. When I came out to speak for myself I realised that the world at large does not like people telling the truth. Bullies don’t like it when you are confident and selfless. They become uncomfortable when you talk back at them. When I realized this, I decided to lend my voice to the voiceless. With God on our side we have won many battles.

Can you tell us little about your educational background?

I was born and bred in Lagos State, the mainland. I attended Our Lady of Apostle Primary School and attended a Girls High School, I also attended Ogun State Polytechnic in the mid 90s to study Mass Communication and I also went to Lagos State University to study History and International Relations that was where I had my Bachelors degree in the early 2000.

Where did you learn your fierce patriotism?

I will say from my mom, she is a very selfless person.  She was a Custom Officer so as a force personnel she was fearless. She gave me the courage to be fearless and selfless, to speak for myself, to be defensive if I have to and to speak for others. I remember when I was in primary school, my timid friends will run to me when they get bullied and I go to defend them so it is no surprise that I ended up doing this now that I am grown.

As a UK based blogger we now see you more in Nigeria, are you back to stay?

I am not back to stay, I am here because I have some businesses here in Nigeria, I have a fashion house where I sell ready to wear attires, lace fabric, shoes and so many other things and that has made me shuffle Nigeria and London but I do not mind to stay permanently.

We also noticed that your social life is becoming large, what do you have to say about that?

I am far from social but I am compelled to be there because I have to come out once in a while. It is obvious to people that I am not the party type because I am a shy person.

Tell us more about you fashion house style?

My fashion house style is mainly native, I sell maxi dresses, kimonos and I make them myself because I pattern them and draw them out to give to my tailors and embroidery. I don’t do shorts or Turkey wears I mainly do Abike Jagaban Signature know as AJ Trending signature it is more like couture and I make them myself and put them in my store. I sell them both here and abroad.

Why People See Me More At Parties These Days – Popular LONDON Blogger, ABIKE JAGABAN was last modified: May 10th, 2021 by City People