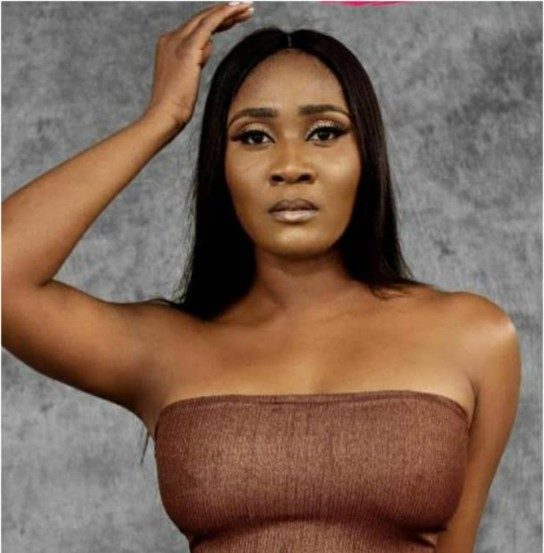 The very gorgeous Gbemisola Anthonia Adefuye, popularly known as Toni Tones, is one of the hottest actresses currently making waves in the entertainment industry. Though she has featured in lots of blockbuster movies, but a lot of people cannot stop applauding her for her brilliant role interpretation in the multiple award-winning movie, “King of Boys” where she acted the younger Sola Sobowale (Eniola Salami) and “The Return of King of Boys” she nailed it back to back.

Her role interpretations in movies are always top-notch and this explains why top movie producers will go to any length to feature her in their movies. Besides her talents and skills, she is a fashion icon, who knows how to dot the i’s and cross the t’s when it comes to fashion.

Ever since the sequel to the movie, King of Boys, dropped in form of the first-ever Nigeria Netflix Series “The Return of the King”. Nigerians both home and abroad have also been pouring praises on the star actress, Toni Tones, whose character in the movie added much value to the series. Many says Toni Tones is the real Laburu, the younger spirit of Eniola Salami (Sola Sobowale). Her character in the movie as fierce and unapologetically evil in her pursuit of revenge.

For many, who don’t know much about Toni Tones, she is a Photographer, actress, musician and editor. She started her career as a photographer before moving on to music and then acting. Her speciality as a Photographer is beauty focused. After many years in the U.K, she returned to Nigeria in 2009 and became a photography design model focusing on fashion and culture. She later worked for Dbanj’s reality programme, Koko Mansion. Her work catapulted her into the spotlight and launched her career. She then went on to work for publications such as Genevieve, FAB, MADE, Soundcity, Vanguard’s Allure and others. She has also collaborated with artistes such as Don Jazzy, Tiwa Savage, Banky W, Wizkid, Omawunmi among others.

She began discovering her other artistic sides after three years in Photography. She began working on her music in 2011, and she formally entered the music industry in 2013. She has starred in series and movies such as Mnet’s hit Telenovela Forbidden, Royal Hibiscus Hotel, Lara and the best among others. She has, however, continued to star in hit movies since then and also worked with A list stars in the industry.

In an interview with Bellanaija, she was asked how she was able to act the role of younger Eniola Salami (Sola Sobowale) so well, she said: “I had a blueprint I had to follow, it had to be believable”. People know Toni Tones and it was a real challenge, I wanted them to watch and not see Toni Tones. I wanted them to watch and see someone believable as a young Sola Sobowale”.

Toni Tones is, indeed, a highly talented young lady growing fast to become a big wig in the entertainment industry. She is also a host and a style icon who many look up to in the industry for her great sense of style.

She is the youngest of a family of five and started her education at Our Lady of Apostle Primary School, Lagos then moved to Queen’s College, Lagos. She later proceeded to the University of Lancaster U.K and bagged a degree in Marketing and Economics. She also attended Relativity Film School in Los Angeles to perfect her acting skills.