Home News Why VP OSINBAJO Has Not Declared For Presidency
News

Why VP OSINBAJO Has Not Declared For Presidency 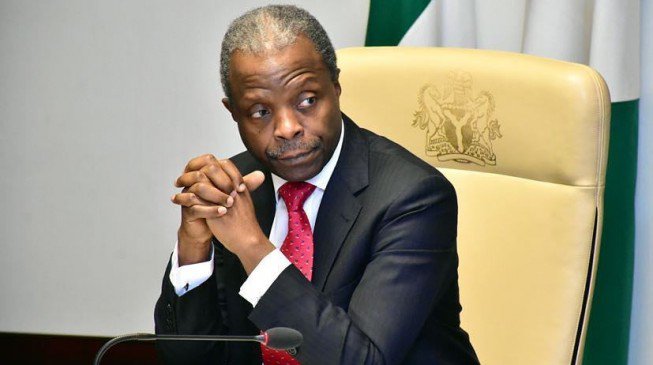 These are not the best of times for Vice President, Yemi Osinbajo, as there are very strong indications that he will most likely have a change of mind and not run for the 2023 Presidency, as planned.

City People has reliably gathered he has been advised not to come out and declare. City People gathered that going by his original plan, according to sources, he was meant to have declared his intention by now. But we hear his plan has changed, in line with new realities. We can authoritatively reveal that since news broke that he was most likely to run,  heavy pressure has been mounted on him, by well-meaning Nigerians, not to run. And this explains the lull in political activity around the VP, over the last 2 weeks. He has gone back to the drawing board to re-strategise, revealed an inside source.

Though many young people have encouraged him to run, the elders have cautioned and prevailed on him not to come out, because according to them, his coming out will be seen as a Big Betrayal. They argue that he will be seen as ungrateful to his political godfather, Asiwaju Bola Tinubu. Some have even likened the situation to what happened between Awo & Akintola, in those good old days. They have told him in clear terms that his decision to run will be a moral burden for him.

Though he has not said a word yet, his entire body language up till a few weeks ago, suggested he was more than likely to run. And people are waiting to hear him officially say so. They are curious to see how the Vice President would square up against the very man who sacrificed his VP slot for him in 2015 and made him the man he has become today.

Insiders have revealed that it was when Asiwaju was governor of Lagos that Osinbajo got his first political job ever. He was made Attorney General and Commissioner for Justice in Lagos by BAT (1999 -2007). He was one of Tinubu’s most trusted aides. In 2015, when it became apparent that Tinubu couldn’t run with Buhari as his deputy, he gave Osinbajo the biggest opportunity he could ever have dreamt of when he offered him the VP slot on a platter of gold.

Osinbajo is on the last lap of his second term in office. He has served his principal well. The majority of Nigerians too think that he has not done too badly as the deputy to a president that wasn’t exactly popular. They thought the professor would be looking forward to the end of his tenure next year so he could retire quietly and go back to more private life in the academic world.

But they thought wrong. Prof has tasted real power. He wants to become President. He wants to succeed President Muhammadu Buhari in 2023. These have raised many questions. How will this play out for him? How will he be able to look in the eye of Asiwaju, his benefactor, and be the man to stand between him and his dream of becoming president of the federal republic of Nigeria? If and when he declares, how will he deal with the torrents of vitriolic attacks that will be directed at him from every part of the country, especially the southwest? The following are some of the likely but pertinent questions Nigerians are likely to hurl at the vice president if and when he declares to run for president next year.

For most Nigerians who have followed closely the relationship between Tinubu and Osinbajo, the very first question they will probably ask is the one that raises the issue of Loyalty and Betrayal. Many are still puzzled as to why Vice President decided to go toe-to-toe on the political battlefield with the very man that made him everything he has become accomplished today? Is it the lure of the irresistible attraction and power that comes with the office of the president, the most powerful man in the land? Why would the once humble and level-headed professor become so obsessed with acquiring power so much so that he would literally slaughter a relationship that has given him far much more than he could ever have hoped for?

Within and outside the Tinubu camp, it is believed that Osinbajo has been the largest beneficiary of the Asiwaju political empire. This is not debatable. So, he is expected to demonstrate the highest level of unwavering loyalty to his leader. He is the last person anyone expected would turn around to square up against Jagaban, the man who taught him every single thing he knows about Politics.

Political analysts have also wondered aloud why the vice president has suddenly become the darling of the North. They have reminded everyone of the situation the Vice President found himself in a couple of years ago following the sacking of Lawal Daura, the DSS head, by Osinbajo while Buhari was away on a medical trip. The Northern mafia despised him for this. They denigrated him before the president and did everything they could to have him disgraced out of office.  Suddenly, they are all now rallying around him, urging him to run for president with the assurance that they are all throwing their weight behind him. An insider has revealed that the whole idea is to use him to halt the fast-moving Tinubu’s presidential train and tear his ambition to shreds. And when he’s done accomplishing that, they would dispose of him too. This is the way the northern power play their game, added the source. They have done it time and time again over the years and it worked for them. It will work for them again this time if Osinbajo declares to run,” he explained.

The big question is: can’t the V.P see through their craftiness? Can’t he read through the Agenda and see that they only need him to take out Asiwaju (if he can) and then he will either be taken out too or backed to become president but will be teleguided by them throughout his tenure, never allowed to be his own man? Why can’t he understand that all he will ever be, even if they let him get to Aso Rock, is a rubber stamp President, one that will remain captive to the powers that put him there for the whole of his time in office? Questions, Questions And more Questions.

Some social critics are also waiting for the VP to officially declare his intention to run for President because they have their own set of questions to ask him. They would like to know, why was he silent throughout the Endsars period? Why didn’t he say anything about the killing of innocent lives at the time? Why did he keep quiet and look the other way as Nigerians kept asking the government questions as to who sent the unknown soldiers and why did they go to disperse a group of harmless youths with live ammunition? First and foremost, as a father himself and as the vice president of the country, didn’t he think there was a need for him to speak out and show empathy to the families whose loved ones were slain? Many Nigerians are yet to understand why he chose to remain silent and pretended he had no idea what was going on.

And what about the rampaging herdsmen and bandits who continue to thirst for the blood of innocent Nigerians? Are these the legacies of the Buhari administration that he plans to build on if he emerges president? The erudite professor is yet to make any significant statement over these issues. He is yet to make any strong pronouncement or statement declaring war against the Fulani herdsmen and kidnappers killing his people, raping the women and taking over their farmlands in the south-west. But why many ask? Is he quiet so he won’t rock the boat of his romance with the northern power blocs? Is he afraid if he speaks harshly about their kinsmen they could make life difficult for him inside Aso Rock? Is that it? Is this also the reason he has been mute over the Sunday Igboho saga? Does it matter to him at all that a Yoruba man has been hounded into prison in a foreign land just because he was courageous enough to fight and protect his people from the killer herdsmen when it was obvious the government was not ready to lift a finger to protect them? Is it right that the young man, a Yoruba just as the VP, who has not attacked or killed anyone, is still in prison custody while killer herdsmen, kidnappers and bandits are roaming freely all over the country perpetrating evil and the vice president has not made any visible move to have him set free?

Some critics have brought the criticism closer home. They are beginning to wonder how many people in his home town of Ikenne has the Vice President helped or empowered? How come we have not heard of a massive foundation that he runs strictly to empower Ikenne people? How come he is not known for lifting up his people and giving them a reason to be thankful to God for making their son the vice president of the federal republic of Nigeria? How come no one has heard of any multi-million naira Osinbajo scholarship foundation that has helped young Ikenne indigents realize their academic aspirations? How come he is not looking in this direction? What has he done for Ogun people in general, can he or any of his close aides proffer answers?

He is also being accused of not cultivating the South-West traditional rulers, Why is this so? Does he think he won’t need them? Now that it is looking more than likely that he will contest for the presidency, is he not going to go round to solicit support from these traditional leaders?

These questions are endless.  Clearly, without a doubt, the vice president is in for a rough time ahead if he declares to run for President along with Asiwaju Bola Tinubu. Many are waiting to take him on, demanding to get his answers to many more questions. With bated breaths, Nigerians are waiting for him to come out and make a declaration or otherwise. The decision he takes will determine how the political trajectory of Asiwaju and indeed that of Nigeria will go as the countdown to the 2023 elections get underway.

Why VP OSINBAJO Has Not Declared For Presidency was last modified: February 14th, 2022 by City People