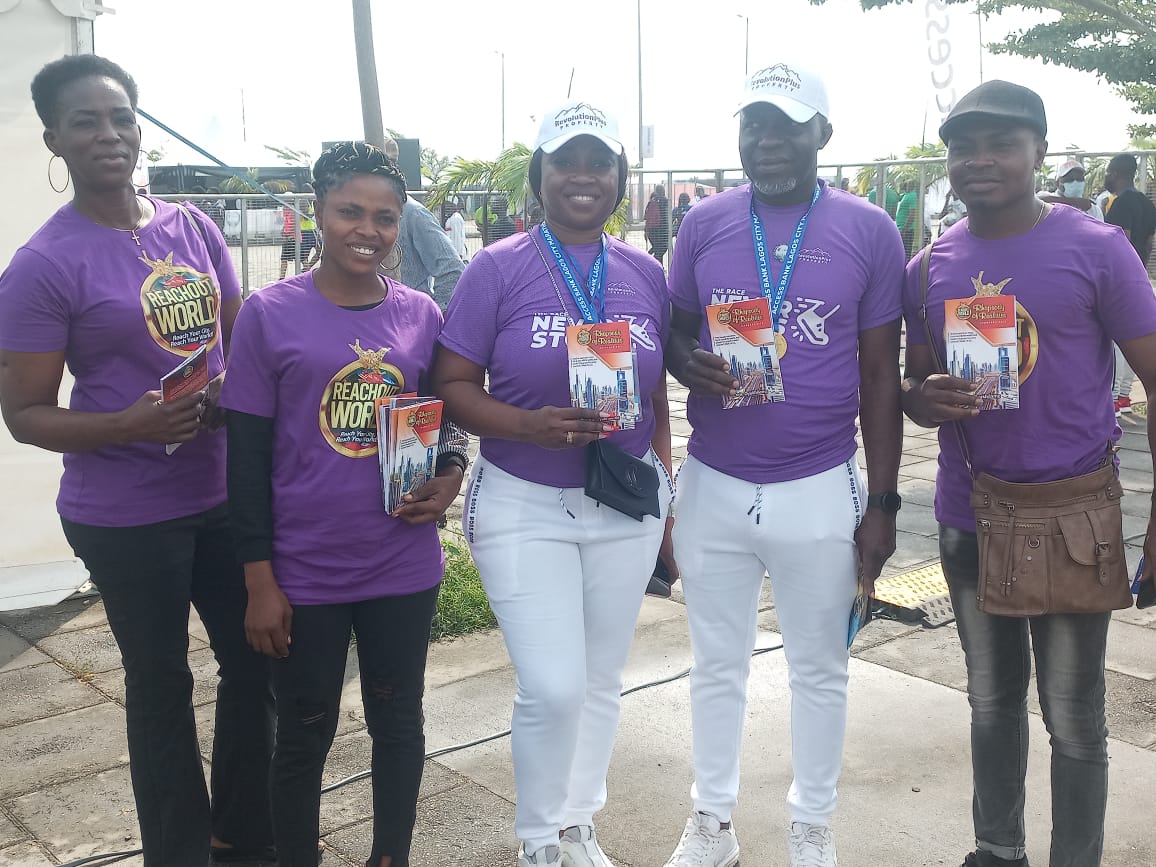 Popular real estate company, Revolutionplus property development company is one of the sponsors of this year’s Lagos City Marathon which was held on February 12, 2022. The Revolutionplus property ensured its brand was right in the face of people throughout the event. There were thousands of souvenirs, gifts distributed among the crowd at the Eko Atlantic city where the grand finale of the event took place.

This year’s event is the 7th edition and it lived up to its billing, as other elite races across the world returned as a full race with about 80,000 to 100,000 runners participating in the 42km full marathon and the 10km fun run.

The 7th edition of the Access Bank Lagos City Marathon 2022 was well attended by prominent men and women in society. Even the Lagos State Governor, Mr Babajide Sanwo Olu, was deeply involved as he took part in the racing competition along with his Deputy, Dr Obafemi Hamzat. Also present was the Minister of Sports, Sunday Dare and other dignitaries.

One of the sponsors of the Lagos City Marathon was REVOLUTION PLUS PROPERTY. The company was ably represented by its two bosses, Mr Bamidele Onalaja (GMD of the company) and Mrs Tolulpe Onalaja (GED of the company). Both the GMD and GED were on stage and were involved in the presentation of gifts and prizes to winners. They were also rewarded for being a consistent sponsor and partner of the annual event. The company was everywhere, making its presence felt in all the nooks and crannies of the venue. The invaluable contributions of the company to the race were well appreciated by the crowd who kept screaming, ‘Revo! Revo!’. The relentless cheering of ‘Revo’ by the appreciative crowd is indeed a good testament to the fact that Revo remains the people’s number one choice when it comes to buying properties.

This is the 4th time the company is sponsoring the event and their partnership was acknowledged and appreciated by the organisers and governor Sanwo Olu.

The winner of this year’s 30 thousand dollars is Geleta Ulfata. Geleta Ulfata from Ethiopia completed the Access Bank Lagos City Marathon in a time of 2.11.58 to emerge winner of the 7th edition of the competition on Saturday.

Ulfata defeated other marathoners to win the 42km race and will walk away with the grand prize of $30,000.

Speaking at the event is Mr Babajide Sanwo Olu, Lagos State Governor. “Let me first congratulate all Lagosians. All of us, sponsors and Mr Olopade who always wants to be behind the scene. He’s the short man behind this initiative. He’s a short man, very cerebral and sports administrator per excellence, who has been the brain behind this event”.

Mr Sanwo promised that the Lagos State Government will continue to be a partner of the event and would make sure it lives up to expectations. “We have discussed with him (Mr Olopade) that very soon, in the next one year maximum, we have to get to the platinum level and that’s what we are planning to achieve and by the time we are celebrating the 10th anniversary, we should be a platinum marathon and what that means is that, every second weekend in February becomes a calendared event globally. And it will become a place to be for every athlete all over the world and if you are a sports enthusiast, it’s also a place to be. It opens up our economy. And sport for us as a government has become one of our biggest rallying points for our youths. Sports know no boundary. You can see that many people who won here today, the majority of them aren’t Nigerians”, he concluded.

READ ALSO: WHY VP OSINBAJO HAS NOT DECLARED FOR PRESIDENCY

Why VP OSINBAJO Has Not Declared For Presidency

A Lot Has Changed About The Hat Industry – OLUBUNMI MARY AJIBOYE