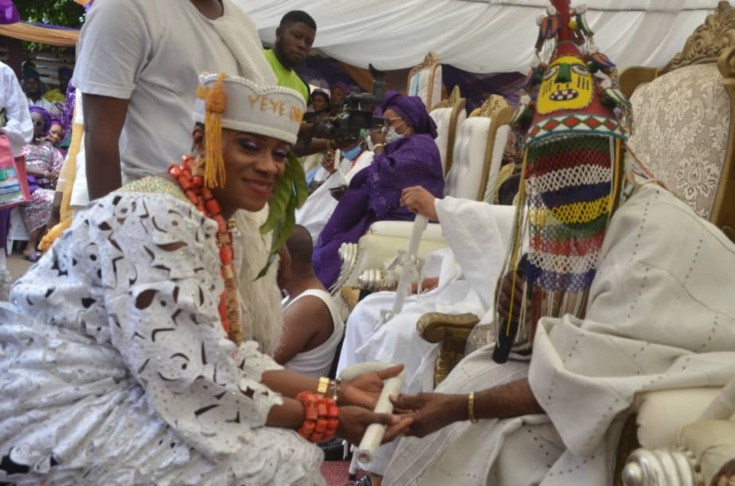 The palace of Oba Timothy Akinsanya Orungbe II, the Ewusi of Makun-Sagamu kingdom became a mini tourism center on Sunday, Sept 20, 2020, as dignitaries from across the country marked their presence at the official coronation of Hon. Adewunmi Onanuga as the new Yeye Oba Ewusi of Makun-Sagamu Kingdom.

Oba Timothy Akinsanya in his speech revealed that Hon. Onanuga had demonstrated leadership traits in various capacities and had proven beyond every reasonable doubt. In his speech, the paramount ruler of Makun-Sagamu town revealed that he had no choice than to handover the chieftaincy title to her because she had proven beyond every doubt that she’s capable of playing.

Hon. Adewunmi is popular among the Sagamu people, she is popularly called ‘Ijaya’ and her fame has gone beyond the shores of Ogun State and has spoken well for her in Abuja as she brought a large number of her colleagues at the house of reps down to the event which also had the minister of women affairs and social development, Mrs. Dame Pauline Tella in attendance.

Below are excerpts from Oba Akinsanya’s speech.

There are so many qualities that made us consider Hon. Adewunmi Oriyomi Onanuga for this highly revered seat. She is first and foremost a true daughter of this great community, she has demonstrated to both old and young that she is capable of leading them and her influence on the people of the community cannot be underrated. I had thought that after she became a house of reps member and also the house committee chairman on women affairs and social development, she might not be interested in her immediate community but that is not the case with her. Unlike other politicians that will see their community as a secondary place of assignment after holding a political office, Hon. Onanuga is a different breed of politician entirely. Despite her busy schedule, Hon. Onanuga will always call to ask about the welfare of the people she is representing and would also come around at intervals to check on them and make them see available opportunities the youths and women can tap into for their personal development and betterment.

Apart from the fact that she relates with her immediate community well, Ijaya also relates well with all the traditional rulers in the Remo Kingdom. She does not see them as just Obas but she sees them as her own father and always has a listening ear being the traditional rulers of the constituency she represents at the National Assembly.

One of her many actions that convinced us about her qualification for this title was an incident that happened in 2018 when some military men and mobile police officers came to encroach on the ancient groove of where Oba Eruwa resides. Oba Eruwa groove being the cultural, ancestral and traditional groove of the seven heavens in the Makun kingdom. The policemen and soldiers came from nowhere not just to encroach but to bulldoze and pull down the ancient groove and its environs and then take over the entire land. This of course has never happened in the history of the Makun Kingdom and should never happen, however, an attempt was made by these unknown men who came and intimidated the entire community. They were looking so dreaded with sophisticated weapons as if they were ready for war. Their look alone intimidated everyone and cast fear upon the people.

To my surprise as the kabiesi of Ewusi, when I called upon Hon. Onanuga to come to our aid, she said she was at Abeokuta and in less than 30 minutes, she had landed Shagamu from Abeokuta. While other chiefs and I were still afraid and were panicking because of the fierce-looking uniform men that were on the scene, Hon. Onanuga approached these military and police officers to ask why they encroached the ancient groove and what their mission was. With her intervention, their mission was aborted, the ancient groove was saved from demolition and has been completely preserved to date. In her usual manner, she restored sanity to the tensed atmosphere, peace and tranquility was restored and the tension was completely doused.

Aare EmmanuelKing who is also a chieftaincy title holder in Makun Sagamu didn’t stay too long because he had another event at Ilisha-Remo but his presence was well felt by other guests and mostly appreciated by the celebrant herself, Hon Onanuga.Adron Boss, House of Assembly Members Storm Event.

The celebrant didn’t need any introduction at the event, she was astonishingly dressed in white apparel that looks like royalty. On her left hand was her new staff of office. She got it as a sign of authority after her installation.

Call it love, ‘espri de corps’ or solidarity and you will not be too wrong because that was what many of the house of reps members that came to Sagamu all the way from Abuja to support Hon Onanuga displayed. Starting from Hon. Omowunmi from Ijero Ekiti, Hon. Ronke Soyonmbo, Hon. Usman Sokodabo Hassan (FCT), Hon. Vincent Ofunelu (Anambra) amongst many others.