Why You Need To Constantly Eat Cashew Fruits 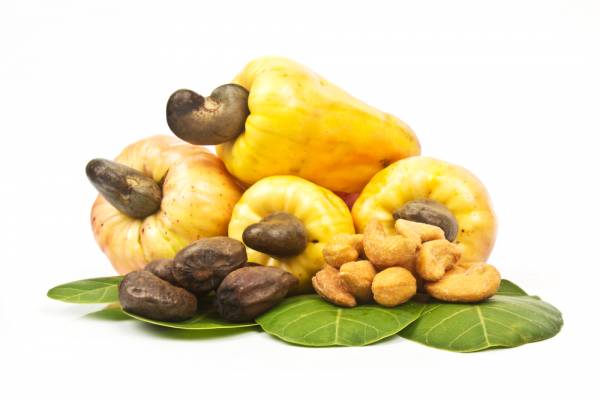 Ramadan Kareem to all our Muslim brothers and sisters

This week, we shall be discussing the Cashew fruit. Cashew is widely cultivated in areas that have tropical climate, example of such countries include; Nigeria, Kenya, India, Sri Lanka, Tanzania etc.

With the popular saying that “health is wealth”, which means that human needs good health in order to stay alive good health comes from the various foods that we consume, and healthy fruits such as Cashew should  never be underestimated. The cashew tree, barks and leaves as well as the fruit itself possess medicinal benefits that are very useful to humans such as; stopping diarrhoea, killing bacteria and germs, increasing libido, reducing fever, body temperature, blood sugar and blood pressure.

No wonder it is sometimes called “nature’s vitamin pill”.

It has been used to promote wellness for centuries.

Cashews are known to be very nutritious and it is a powerhouse of proteins and various essential minerals such as calcium, copper, magnesium, phosphorus, iron, zinc and potassium. Sodium is also found to be present in trace amounts.

Vitamin K (phylloquinone cholesterols too if they are consumed appropriately.

The cashew consists of the fleshy fruit and also the nut, both having properties that are beneficial to our health.

Roasting the cashew nuts is common practice that is enjoyable and seen as fun among juveniles in this part of the world.

These nutritional compositions enables cashew to be medicinal and beneficial to human health.

Now let us look at the following health benefits of cashew.

Cashews are good source of monounsaturated fats meaning healthy dietary fats that are very friendly to the heart. The healthy dietary fats are essential for our body because they make it possible for the body to absorb the fat-soluble vitamins A, D, E and K and produce fatty acids that are vital for the development of the brain and blood clotting.

The inclusion of nuts such as that of cashew in our diet can provide the heart the needed healthy unsaturated fats needed by the body..

Cashew is known to contain a relatively high fat content  but it is also termed as “good fat”. It is  good fat because of the agreeable fat ratio in the nut of 1:2:1 for saturated, monounsaturated and poly-unsaturated respectively, which scientists have tagged as  the ideal ratio for optimal health.

Cashew is vital for the development of bones, tissues, muscles, and organs of the body because it is a good source of magnesium. Magnesium also facilitates the maintenance of healthy blood pressure, sustain the immune system, maintain nerve functions and keep the bones strong.

Since Cashew contains a very low amount of sugar and no harmful cholesterol. it is highly safe for those suffering from diabetes. It is also effective in lowering the risk of type 2 diabetes…

Research has proven that these antioxidants makes cashew to be effective for people undergoing treatments for tumour and cancer….

Cashew contains a huge amount of copper, and copper helps in iron metabolism, formation of red blood cells and assist in keeping bones and immune systems healthy. It is also vital for the nervous and skeletal system of the body.

Copper deficiency in humans may result in anaemia, osteoporosis, and irregular heartbeats.

Phosphorus is also found in cashew, which is essential for the healthy development of teeth and bones. Phosphorus also assists in protein synthesis, maintenance of cellular health, absorption of carbohydrates and fats…..

Gallstones are stone-like deposits that usually consist of cholesterol that accumulates in the gall bladder. The regular inclusion of healthy nuts like cashews can help to lower the risk of formation of gallstones.

Cashew plays a vital role in the strengthening of the immune system because of the zinc contained in it.

Zinc additionally helps in protein synthesis and healing of wounds. Zinc is totally important during pregnancy for the development of the foetus and also during the growing years of childhood in order to maintain a stable state of the body.

Cashew is rich in proanthocyanidins, a class of flavanols that actually starve tumours and inhibits the division of cancer cells. Studies have also shown that cashews are capable of reducing the risk of colon cancers.

Cashews are rich in copper. Copper is an essential component of many enzymes and it plays a part in a broad array of processes. One copper-containing enzymes called tyrosinase, converts tyrosine to melanin, the pigment that gives colouration to the hair and skin.

Cashews contain zinc, which plays a vital role in the strengthening of the immune system against microbial infections, protein synthesis, and the healing of wounds. It is extremely important during pregnancy for the growth of the baby and the developmental years of childhood to maintain a healthy body.

Cashew nuts are tasty and highly sought-after nuts. They can be enjoyed either roasted or plain, and with or without salt.

They are added to  various vegetarian and non-vegetarian delicacies and a range of confectionery food items like cookies, biscuits, and ice cream.

Apart from the famous and delicious cashew nut, the cashew tree offers an immense treasure of medicinal and industrial uses as well.

These applications are widely popular in Guyana and all over the Amazon.

The bark and the leaves of the tree possess medicinal benefits and have been used as a remedy for both, diarrhea and colic. Cashew leaf extract is used to reduce blood sugar and blood pressure levels.

The infusion of the bark of the cashew tree has astringent properties and is used as a mouthwash for treating oral ulcers and as a remedy for sore throats and influenza.

Leaves of the cashew tree, when boiled with water, serve as an anti-pyretic and are used for the treatment of aches and pains throughout the body.

Cashew Apple fruit as it is called in some places possess anti-bacterial properties and have been proven to be effective in treating stomach ulcers and gastritis. The juice from cashew apples is rich in

Vitamin C has an anti-scurvy effect. It is widely utilized  in the cosmetic industry due to the presence of antioxidants and it is used in the preparation of various creams and shampoos.

Cashew extract contains anacardic acid, which is an antioxidant and has been shown to limit the pigmentation effects of aging and eradicate the cancer cells. The fruit of the cashew tree is used to treat infant’s thrush and sore mouth. In the Amazon, people use teaprepared from the bark and the cashew apple juice for chronic dysentery and as an anti-diarrheal remedy.

Gum extracted from the cashew stem is used as a varnish for wood works and books.

Soaking its barks in water for about a day can be used to control blood sugar levels, treats a sore throat, influenza, used as a mouthwash, and reduces blood pressure. The decoction of its leaves can treat diarrhea, dysentery, hemorrhoids, skin disorders, cuts, burns, and wounds.

All parts of this plant can also be used in the preparation of traditional medicines.

I remain yours in good health, .. Oluwabukunolami.

Like we always say, we would like to hear from you..you can send us mails through gregatt0305@gmail.com…you can also call , send sms or send whatsapp messages to  07054964619

Why You Need To Constantly Eat Cashew Fruits was last modified: May 29th, 2018 by Health Check

Though I Am An Actress, I Keep What Is Private, Private –SHAFY BELLO Reveals

Why Endometriosis Makes It Hard For Women...

How I Became A Professor At The...

Must Read: This Is How You Detect...