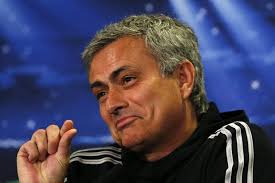 Manchester United manager, Jose Mourinho, has predicted that the Super Eagles of Nigeria will qualify in Group D at the 2018 World Cup in Russia.

The Portugese gaffer, however, stated that Gernot Rohr’s men will come second behind Lionel Messi’s Argentina.

“Second place, very difficult choice, but I put on the African team, Nigeria”.

If Mourinho’s predictions come true, it would be the second consecutive tournament that the three times African champions would face France in the round of 16.

Paul Pogba’s 79th minute strike and a Joseph Yobo own goal in injury time condemned the Eagles to defeat in Brazil 2014.

Nigeria will face Czech Republic in their final 2018 pre-World Cup friendly on Wednesday afternoon at Rudolf-Tonn-Stadion Stadium in Austria.

After the game against Czech, Rohr’ side will head out to Russia to begin their 2018 FIFA World Cup campaign underway in less than two weeks.