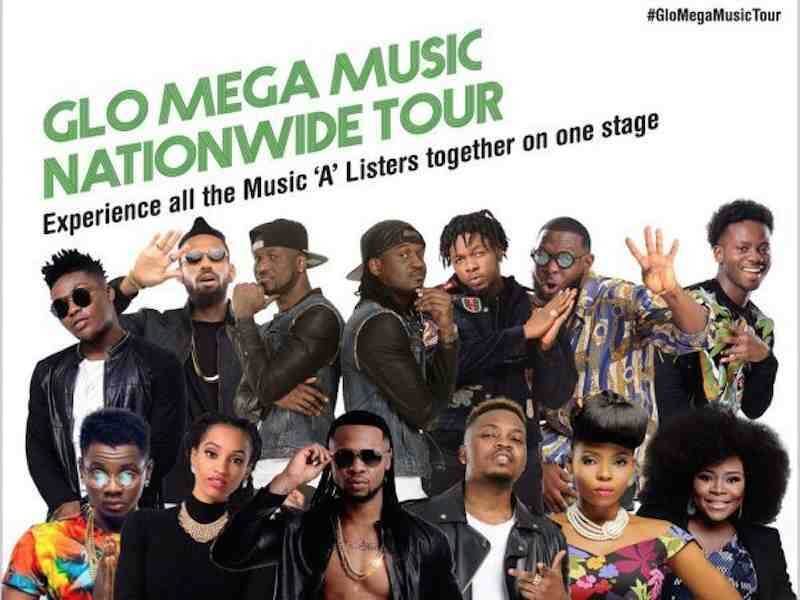 Asaba, the Delta State capital  was set aglow last Saturday as telecommunications giant, Globacom, staged a six-hour  mega music  show which had entertainment icons like Flavour, Omawumi Megbele, Yemi Alade and others on the bandstand

Prior to the commencement of the  show, Mercy Johnson, Juliet Ibrahim, Victor Osuagwu and RMD  bonded with the crowd  by signing autographs for the guests as well as  taking selfies with their fans.

Talented up and coming artistes such as Perezi, Young Swags, H-Culture, Brown ray, Notorious Set Zon and the guitarist, Chika Madu entertained  their local fans with their unique performances which got the ecstatic crowd yearning for more.

The crowd was also engaged in a dancing competition which came as  a welcome appetizer for the main course of the evening as Okafor Chinedu, Obeh Dorothy, Mafiana Lusanda, Idemudia Emmanuel and Onyinye Udogu were exciting on stage as they gyrated to the hot vibes by DJ Xgee. There were also  the quad  of Jayfegs, Claire Babie, Eloques and Sammy West, who were lucky to have been  pre-selected as winners of the #Glosings60seconds online competition.

Omawumi opened the evening with her sonorous renditions of some of her hits including “If you ask me” and” Megbele”  which her fans reacted to his exciting shouts of acclamation. Svelte songstress, Yemi Alade, dazzled the crowd with her  highly creative choreography, stage craft and soulful songs.

Nabania crooner left no one in doubt that he was as popular as ever as  he literally set the hall  on fire as he dished out a  full dose of entertainment as the audience applauded.

Africa’s most enigmatic singing  twins, PSquare sent the crowd into wild ecstasy  as they blended music, choreography and dance drama seamlessly, proving that their permanent seat at the summit of Nigeria’s highly competitive and tempestuous music industry for almost two decades on the stage is not by happenstance.

As the crowd was still savouring the Shakiti Bobo prodigy, Phyno, who in history, has done more collabo with Olamide, made a grand entry on the stage setting the crowd ‘gaga’. The hall was by now  literarily on fire as attention shifted to the VIP section, where RMD, who  is arguably the biggest celebrity fan of the Fada Fada crooner, donned his dancing shoes  to the delight of the crowd.

Globacom’s National Sales Coordinator, Mid-West, Mr. Augustus-ndu Offor, in his welcome address said that the concert was a “way of appreciating our customers for their abiding faith with the Glo network over the years.”

According to Offor, the next stop for the Glo Mega Music Nationwide Tour would be Aba, Abia state.

He  urged fun seekers who would like to attend any of the other shows to use up to N2,000 airtime within a month and Text “MUSIC” as well as their preferred location to a short code 207 such as “MUSIC ABA” to 207.

6 Benefits Of Having Genuine Title Documents •On Your Landed Property