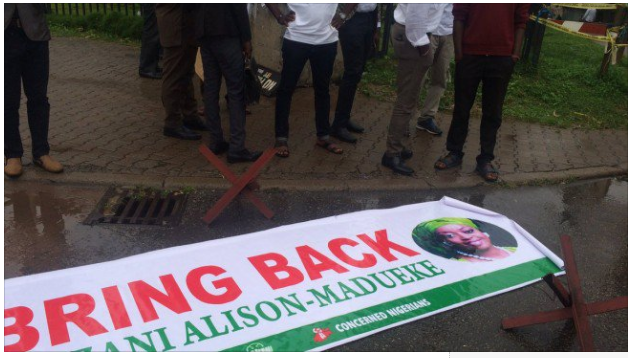 Popular Nigerian act, Charles Oputa, also known as Charly Boy, on Monday led a protest to the headquarters of the Economic and Financial Crimes Commission (EFCC) in Abuja to demand the extradition of Diezani Alison-Madueke, former minister of petroleum resources, from the UK to Nigeria.

The protesters, who converged on the premises of the anti-graft agency, wielded a banner which comically read, ‘Bring Back Diezani Alison-Madueke’.

Two weeks ago,  Charly Boy led a series of protests to demand that President Muhammadu Buhari either resume office or resign.

In one of the protests, his group – Our Mumu Don Do – was attacked by hoodlums at Wuse market in the federal capital territory.

Alison-Madueke, who served in the administration of Goodluck Jonathan, has been linked to several corruption cases. Some pieces of property she allegedly own have also been seized by the government.

But the former minister insists that she has no case to answer and that the pieces of property linked to her were not hers.