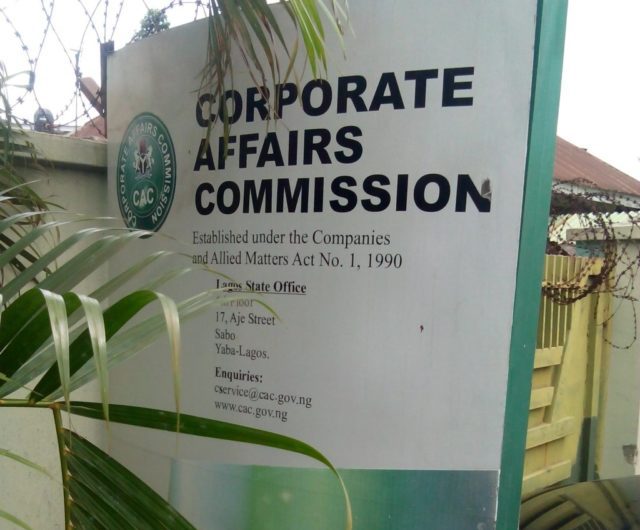 The Staff Union of CAC began a three-day warning strike in protest of alleged non-payment of nine per cent salary arrears.

The headquarters of the CAC was shutdown and no business activity allowed: company registrations and registration of business names were put on hold following the strike.

The Chairman of the union, Mr Ibrahim Kirfi, told our correspondent that the strike was due to non-implementation of a tripartite agreement on huge salary disparity between the executive and non-executive staff.

Kirfi said that the agreement was duly signed by the management of CAC, the Ministry of Industry, Trade and Investment and the national leadership of the body, to resolve the pending salary arrears .

“Today offices are locked until our demands are met, if these three-days warning strikes expire and they are not forthcoming and did not agree with our demands, we will continue the strike indefinitely.

“Earlier, we have had series of consultation with them (management), both formal and informal, written and verbal.

“Everybody knows the economic situation of the country because the performance of the economy is poor; we know Nigeria was in recession in 2016 and there is no money.

“There is no money in the commission does not mean there is no money at all because executives still go on foreign trips; all we are saying is that let the management see reason in commencing the payment of our entitlements.

“Even if it is five persons that will be paid, we will know that there is commitment from their side.

“We can support that as money is coming in gradually they will be able to pay us all our entitlements, but they are not even willing to pay us at all.

“More than two years into the implementation of the agreement, yet nothing,’’ Kirfi said.

He said that it was necessary for the management to pay the arrears from January 2014 to date, adding that if the demands were not met, the strike would continue indefinitely from Monday.

Kirfi said that the industial disharmony between management of CAC and staff dated back to October 2013, when former President Goodluck Jonathan announced an increase in emoluments of staff by 53.37 per cent relativity pay.

According to him, the agreement has been reached that an increase of 15 per cent and 35 per cent be made in favour of the executive and non-executive staff.

CAC Spokesperson, Mr Godfrey Ike, said that dialogue was ongoing between the union and management to resolve the pending issues.

Ike said that management would not owe salaries because the commission regarded salaries as its greatest asset.

He said that right now, no staff member was owed any salary, adding that issues of salary were not controlled by the commission but Salary and Wages Commission.

“There is an agency of government that handles issues of salary and wages and these issues have been presented to them and the commission is still following them up.

“This strike is totally uncalled for because we are still talking and even at this moment dialogue is still going on.

“On training, when we get approval as at  when due and everybody goes for training; so in terms of welfare, I think the commission has been fair to ensure that no staff member is denied of  any right.

“The commission itself cannot just implement payment unless it gets approval,’’ Ike said.

“11 Proofs That Show Recession Is Almost Over” – FG