Home News “I Don’t Think It Is Necessary To Be Dribbling Me” – Defence Spokesman, John Eneche Tells Jurnalists
News

“I Don’t Think It Is Necessary To Be Dribbling Me” – Defence Spokesman, John Eneche Tells Jurnalists 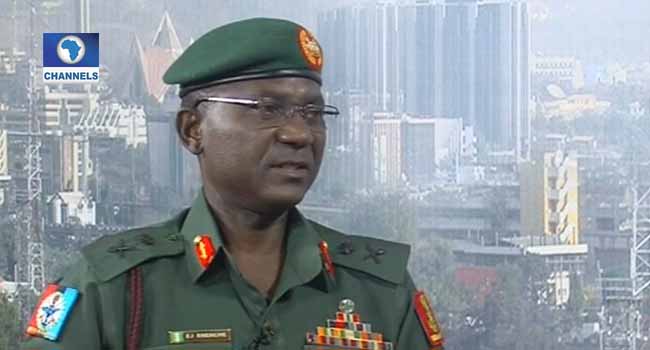 Defence spokesman, John Eneche, on Monday asked television journalists not to dribble him as he was being quizzed in a tv show.

Eneche made the statement while answering questions from the crew of Sunrise Daily, a Channels Television breakfast programme.

He was told to respond to the retraction of the army on the oil experts who Bokom Haram fighters abducted and killed in Borno state.

The sad incident happened on Tuesday and less than 24 hours after, the army said it had rescued the victims.

However, the Nigerian National Petroleum Corporation (NNPC) and the University of Maiduguri where the experts worked said they could not confirm the claim; turned around on Sunday and admitted that the claim was false.

The issue turned out being controversial and the army tendered an apology on Sunday.

Eneche, who said the army based the false statement on a “contact report” from the troops, explained that a retraction was issued after the military received “situation report”.

“I don’t think it is necessary to be taking me back or dribbling me here, I said that contact report and situation report, there is a difference. When that came to the limelight, the army packaged its response appropriately, without any pride,” Eneche said.

He also spoke about the challenges of the army in the fight against insurgency.

“Rainy season affects the troops. Take for instance, the impact zone of ammunition, a bomb of instance, it is highly reduced in rainy season, the hardness of the ground is also a factor to give effect to the shrapnel that will spread – the iron, the lead and anything that you know that will kill the people or eliminate them,” he said.

“Even the terrorists themselves, it’s not like that they have taken back territories fully, hoisting their flags and all that, no. That is the truth.”

When asked if the army had the capacity to transport people in the region, he said: “That is what we have been doing and that is what we still do. But in an operation, anything can happen.”

“I Don’t Think It Is Necessary To Be Dribbling Me” – Defence Spokesman, John Eneche Tells Jurnalists was last modified: August 1st, 2017 by Damilare Salami

‘Why are people spreading rumours about my death, when I am right here at Oriental,’- Awujale