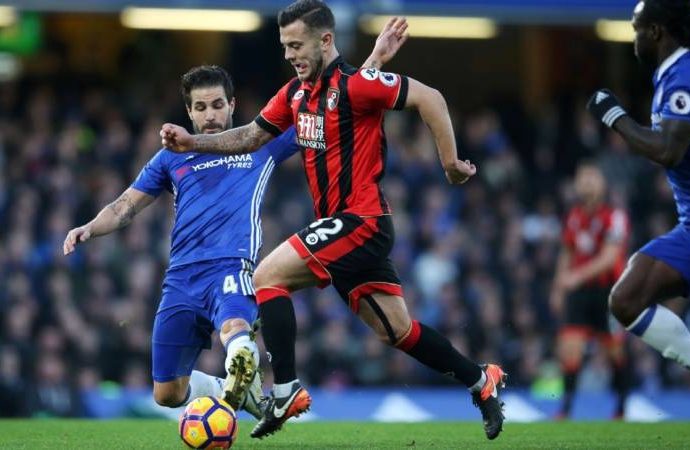 City travel to the Vitality Stadium to face Bournemouth knowing that a win will take them up to second in the Premier League table, eight points behind leaders Chelsea.

Guardiola is looking forward to coming up against Arsenal loanee Wilshere, a player he first encountered in 2011 when his Barcelona side met the Gunners in the Champions League — and who has been linked with a move to City in the past.

“I remember in Barcelona and that year we played Arsenal he left a massive impression when he came,” Guardiola is quoted as saying by the Daily Telegraph. “A high, high level. I know the problem with Jack Wilshere was just the injuries.

“He’s lucky to play regularly for one season and he is going to be back to being one of the best midfield players in England by far. He’s quality, he’s smart and has the quality on the ball. He has a special quality with the ball, dribbling as a holding-midfielder to attack central defenders — it’s not easy to do that.

“He’s a little bit like [Mousa] Dembele at Tottenham. They have quality to pass, pass, pass and then immediately destroy the defensive structures. I’m so happy he’s back and he’s playing regularly. Hopefully on Monday he can play.”

Wilshere left Arsenal to join Bournemouth for the season on loan last summer in attempt to build up his fitness and gain regular game time.

There have been some suggestions that Arsenal boss Arsene Wenger made a mistake in letting him go given his side have been light on central-midfielders in recent weeks.

“That’s a good question,” Guardiola said when asked why Wilshere made the move. “He would still be playing for Arsenal if he was fit [before]. But I think it was so important for him to be able to play week after week.”