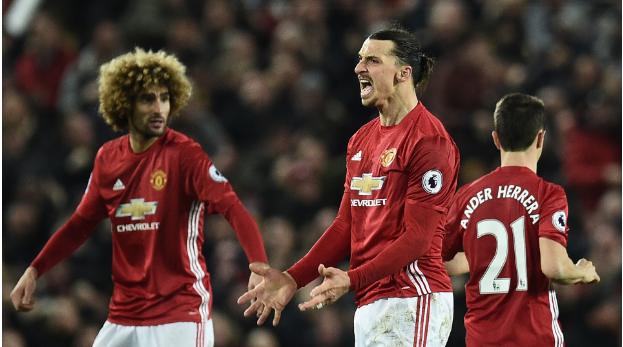 Manchester United striker Zlatan Ibrahimovic has yet to commit his future to the Premier League club despite the Swede saying he has fulfilled the requirements needed to extend his contract.

The 35-year-old has silenced critics who suggested he may struggle to adapt to the pace and intensity of the English game, scoring 20 goals since moving to Old Trafford from Paris St Germain on a free transfer in July.

Manager Jose Mourinho said in November that United planned to exercise their option to extend Ibrahimovic’s contract, which runs out at the end of the current campaign, for a second season.

“Something like that. I have to score 100 goals,” Ibrahimovic told British media when asked if he has triggered the extension clause with goals and appearances.

“The option is already fulfilled. But there’s nothing done yet. From my side. We’ll wait and see. Let’s see what happens.”

Despite sitting sixth in the league, 12 points behind leaders Chelsea after 25 games, Ibrahimovic believes Manchester United are well placed to pick up silverware in other competitions.

United face Southampton in the League Cup final on Feb. 26 and are still involved in the Europa League and the FA Cup.

“We have one (the Community Shield) and we can get our second one (the League Cup),” the charismatic Swede added.

“We are still in the Europa League and FA Cup, so if we don’t become champions in the Premier League, at least we can try and win two or three trophies.”