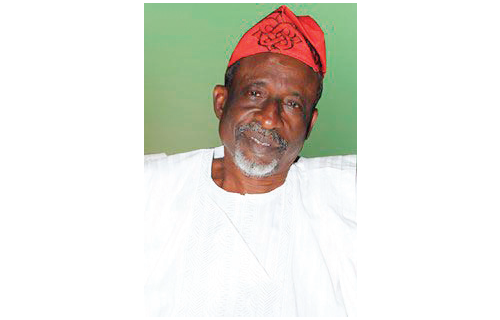 Chief Suarau Olaiwola Alani Bankole is an Egba Highchief and by virtue of his birth a Kingmaker. He is the Seriki Jagunmolu of Egbaland. He is the Oluwo of Iporo Sodeke, Iporo Ake. These are very weighty titles in Egbaland. And for more than four decades Chief Bankole has been traditionally active not just as a participant in traditional affairs, but as a stakeholder, owing to his role as a traditional and community leader.

So deeply involved is Chief Bankole that he recently wrote a book on Alake of Egbaland: The Succession Dynamics which is regarded in many circles as an authority on the Alake Kingship. Chief Bankole wrote the book to ensure the protection of the sanctify of the Alake stool and the sustenance of its sacredness. He says his experience as a Kingmaker and a Chief in Egbaland has proved to him that only a few persons understand the intricacies of how an Alake is chosen and crowned.

Chief Alani Bankole is from Iporo, one of the townships in the Egba Alake section of Egbaland “I’m always proud of Iporo, not because it is the place of my birth, but more because of the strategic roles that my forefathers played in the formation of what is today known as Egbaland.

“Their roles were so strategic that without sounding immodest}it, will be almost impossible to discuss issues relating to Egbaland, Egba Alake, the Alake’s stool or even the process of choosing an Alake without reference to the roles played by the great Egba’s sons of Iporo extraction.

I must state clearly that this is not limited to a particular era. From generation to generation, Iporo has become renowned in producing men noted for bringing glory to the Alake’s Kingdom. It is important for me to put it on record that Iporo is the number two, only next to Ake in the chain of Omo-Iya-Marun, the five permanent members of the Kingmakers Council in Egbaland. This group can be likened to the five permanent members of the Security Council of the  United Nation (UN). Others are Kemta, Itoku and Ijeun.

“The Iporos are generally very strong-willed, intelligent, straight forward, patriotic and progressive- minded people. An average Iporo is a dogged fighter and is not given to betrayal. Right from time immemorial, once the Iporos give you their word, you can be sure that the pact will be kept. The Iporos along with other Omo-Iya-Marun settled along Olumo Rock, after Ikija on arrival from Igbo Egba.

Our homestead is however situated at Boodo Village, a settlement along Ibadan road in the present Obafemi/Owode Local Government area of Ogun State. It is no doubt a small, but closely knit and peaceful community.

Iporos are, also in the other five Local Government areas in the Ogun Central Senatorial District and beyond, including the present Lagos State.

Every major issue involving the Iporos, especially traditionally, will have to be blessed at Orile Iporo.

Despite our strong footing in Abeokuta, the shrine, for instance, is still at Orile Iporo. The Iporos are a special gift to Egbaland. At critical moments, they have always played strategic roles centered on the progress of Egba Nation.”

In the book, Chief Alani Bankole described himself as an insider, which explains why he is able to put on record the process involved in the making of an Alake and only an insider can take up such a responsibility. “I am an insider and authority by virtue of being a kingmaker,”  he asserted.

He is a Kingmaker, who is not only conversant with the stage-by-stage rites involved in this enormous responsibility, but he also participates in the crowning of an Alake.

He is not only of Iporo extraction of Egba Alake, Lukere, the man who discovered the Olumo Rock, was his great, great grandfather. Lukere was the father of his great, grandfather, Bankole 1st, who was one of the richest in his generation. He was born about 1853.

Bankole grew up as a merchant and farmer, being the son of an influential Chief.

In those days, Iporo chiefs were actually the head of Egba chiefs. Sodeke himself was the Balogun Iporo, but he was the ruler of Egbaland because those were the periods when warriors were the leaders.

“Bankole, my great grandfather, became the Apena of Iporo in 1897 and when the Egba United government was formed in 1898, on the advice of the British government in Lagos, the then Alake Osokalu became the president of Egba Nation. The other Obas; the Osile, the Olowu, and the Agura all became Ministers along with the head of the Muslims and the head of Christians.

In the cabinet, there was no Egba Alake man. Since the Alake as the President could not double as a Minister. They chose Apena Iporo, Chief Bankole to represent the Egba Alake section in the cabinet in 1898 under Oba Osokalu.

His grandfather, Somuyiwa, was the second son of Bankole. When the Muslims came to Abeokuta, he was converted and was named Salami. His brother, Osho Aminu, was made the Olori Ode of Iporo after their grandfather, but when the Ogbonis invited both of them to take Ogboni titles, they both declined on the grounds that it was not right for them as Muslims to hold Ogboni titles, which was generally associated with fetishness even nowadays. They were of the opinion that the Olori-Ode was just a show of their proficiency in hunting and spiritual dexterity.

Chief Alani Bankole’s father, the late Alhaji Rufai Gbadebo Bankole, who until his death was the Jagunna of Iporo Muslims too, was not interested in Ogboni chieftaincy. As a young man, Chief Alani Bankole was very adventurous. The more he got honoured with different chieftaincy titles, the more he realised that his forebears were not very correct in their assessment. Before his father died, he had become the Sagua of Iporo and Sagua means heir apparent.

Shortly after his father’s demise, he became the Balogun and a Kingmaker, which is the highest title in the Ologun (Warriors Lineage). As Balogun, you are the Commander-In-Chief of the army. He said when he became Balogun, he realised that there was nothing fetish in the position of Oluwo Iporo. It was clearly the Head of Government of the town.

His confidence was further streghtened when it dawned on him that his predecessor, the late Chief Toye Coker was the Baba Ijo of the African Church, Idi Ape, Abeokuta. So, he concluded that if an Oluwo could be the head of a Church, it would not be out of place for a Muslim to be an Oluwo too. So, when Chief Toye Coker passed on in the year 2000, he was installed Oluwo of Iporo, which practically means, the Kabiesi of Iporo and in that capacity, he became the head of Iporo Kingmakers Council in Egba Alake. So, that is where he derived his authority to be a kingmaker.

Oluwo of Iporo at any given time, is the ruler of Iporo and, therefore, he is a leading member of the Kingmakers Council in Egbaland wrote Chief Bankole. When the declaration was actually made by the then Western Region Government, which had then become self-government under the British supervision, the choice of people to become Kingmakers fell on the Oluwo Iporo as number one from Iporo and number two on the list, after the Oluwo of Ake. The other members of the Kingmakers Council by virtue of the declaration are listed in the fifth chapter.